Places That Are Gone

Buildings, bakeries, and sugar factories give way to stadiums and high rises. 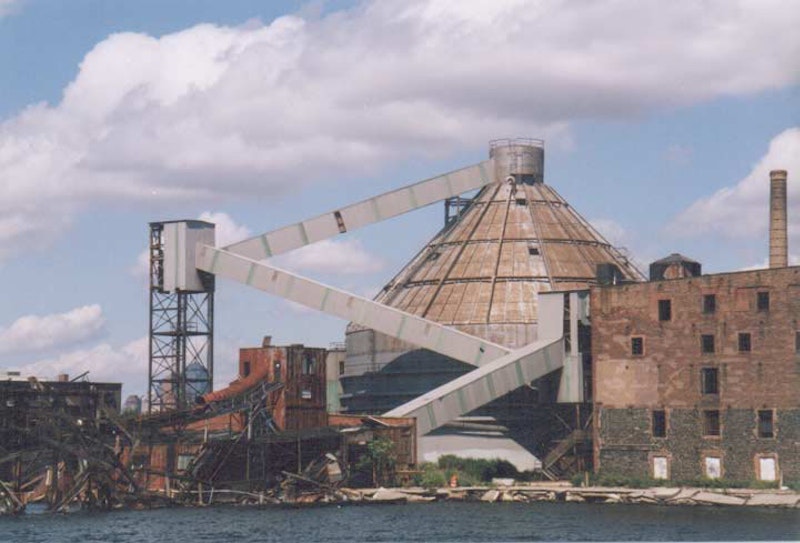 The late Tommy Keene had a great song called “Places that Are Gone,” about what you’d expect. Periodically I go over my stash of Forgotten New York images between 1998 and 2003 or so, while I was still using a 35mm film camera. Back then, I needed optimum conditions, and rather than spend a lot on film I limited myself to taking 24, 36, 48 or 72 photos per jaunt. Today, depending on settings, I can take as many as 750 to 1000 photos per trip.

A magnificent artifact of architectural disintegration on Red Hook’s Beard St., the Revere Sugar Refinery’s tangled maze of rusted ruins including conveyor belts, bridges and a refining sphere stretched out toward Erie Basin, where they met the sunken St John lightship. The huge domed granary could be seen from all over the immediate neighborhood. The Revere Sugar Corporation operated three refineries, in Charlestown, MA, Chicago and in Red Hook. The company, once owned by Antinio Floriendo, known as the “Banana King of the Philippines”, declared bankruptcy in 1985, and the refinery sat idle from that year until it was razed in the early-2000s. 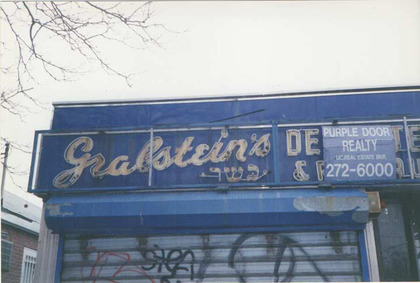 Grabstein’s was  a Jewish deli at the corner of Ave. M and Rockaway Parkway in Canarsie. I obtained the image between 1999 and 2001; Grabstein’s had recently closed. NYC’s traditional Jewish delis have disappeared of late: the more noticeable casualties are the Carnegie in Midtown and Ben’s Best in Rego Park, with the owner of the latter blaming Queens Boulevard’s new bike lane because it eliminated parking spaces. 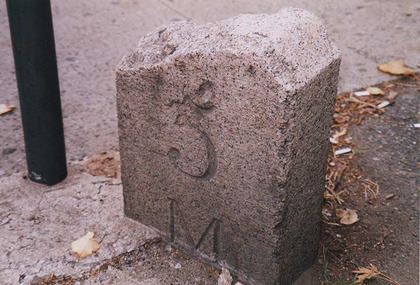 Not a lot of people could’ve identified this object, which used to be on the corner of Ocean Parkway and Neptune Ave. on the fringes of Coney Island, but I knew right off the bat that since it had a number and a letter M on it, it must be a milestone. I was happy to find it since I’d been previously aware of another remaining Ocean Parkway milestone, the 3M, near Ocean Parkway. As it turned out, when Ocean Parkway was built (for horses and carriages) around 1870, it had not only mile markers, but half-mile markers. Over 140 years, all but one has now disappeared. 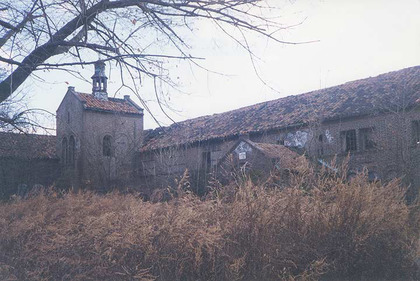 Little did I know when attending a religious getaway with my senior high school class in November 1974 at the Spanish Colonial Augustinian Retreat House, 144 Campus Rd. just east of Howard Ave. in Grymes Hill, Staten Island, that a couple of decades later the building, now in ruins, would become a mecca for urban explorers and the subject of dozens of ghost stories. The ravaged building, hidden under a thick canopy of weeds, ailanthus and ivy, was the home of the Augustinian Academy, a Roman Catholic institution incorporated in 1870. The Society purchased this property from Erickson N. Nichols in 1922 and built a prep school here; classes were held until 1969, when it was converted to a retreat house. The Augustinians sold the property in 1985, and it had passed through many hands since, with Wagner College now owning the property. Nothing has been done to it at all by human hands for over 20 years.

I wandered onto Campus Rd. in the mid-1990s, just out of curiosity, and was shocked to see its current state. Online urban explorers told tall tales of murders happening here, ghosts haunting the halls, and levels and sublevels too deep to venture into; I saw a building where I witnessed prayer, laughter and tears, left for the elements to tear it apart. The Academy’s Celtic cross-shaped fountain and bell tower were still discernible.

Nearby Wagner College bought the plot several years ago, and the academy has long since been razed, leaving just weeds and trees. Only a pair of street signs exist as a reminder that it was ever there: “Augustinian Academy Way” ands “Reverend Lyle R. Guttu Way.”, at Campus Rd. and Howard Ave. The Rev. Guttu was chaplain, dean of students and a special assistant to the president at Wagner College; he passed away in 2007. 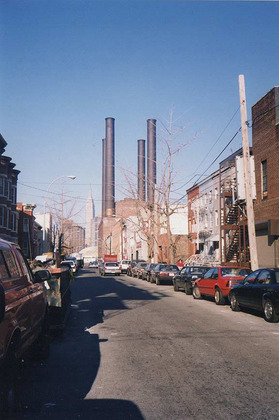 In 2005, the Hunters Point skyline lost much of its panache when the four ebony smokestacks of the Pennsylvania Railroad powerhouse were removed, as the building edged toward residential conversion. The stacks are seen here looking west on 51st Ave. The big building with its tall arched windows and massive granite base was designed by McKim, Mead and White beginning in 1903 and completed in 1909, the year before the firm finished Manhattan’s Pennsylvania Station. (Some scholars believe Westinghouse, Church, Kerr & Co., the firm that handled Penn Station’s mechanical and electrical systems, designed the building, however.)

The Powerhouse was built when the Long Island Rail Road deemed it necessary to electrify most of the western portion of the railroad in Queens and Nassau Counties in preparation for the opening of the East River tunnels leading to the new station. At the same time, the main line from Flatbush out to Jamaica was electrified along Atlantic Ave., where the line was being placed in a tunnel and along an elevated trestle; this wouldn’t be fully complete until 1940. Over 9500 piles were driven in the generating plant’s construction; when finished the plant supplied 11,000-volt 25-cycle, three-phase alternating current to substations. 625 volts of direct current are carried on the LIRR’s third rails.

The Powerhouse was the second in the country to employ steam turbines, burning coal to boil water for steam to drive the turbines. By 1910 it contained five generators using from 5500 to 8000 kilowatts. In 1959 the Schwartz Chemical Company moved into the Powerhouse and it has seen mixed use since, a few as an indoor tennis court. The building remains, with much less exterior personality, as luxury residences. 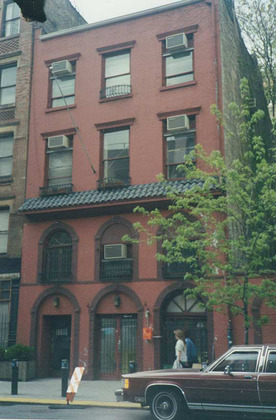 The spirit of Edgar Allan Poe still roves New York City, though he’s not easily discerned; there’s obscure Poe Cottage in Kingsbridge, Bronx, and a tiny, refuse-strewn alley nearby called Poe Pl. In this four-story building at 85 W. 3rd St., Poe lived and worked in 1845 and 1846. Some of his more famous works such as “The facts in the Case of M. Valdemar” were written here. Poe had three NYC residences: 85 Amity St. (renamed W. 3rd soon after Poe left the house), a farm in what is today W. 84th St., and the Poe Cottage. For 70 years this building hosted the popular Italian restaurant, Bertolotti’s. There was also a club called The Gold Bug, a title Poe aficionados would know about.

In 2001 New York University tore down the house, which had never been landmarked, and built a large building to house the NYU Law School. However, the central building was designed to resemble the old building in which Poe had lived. The law school also hosts an annual Poe event. 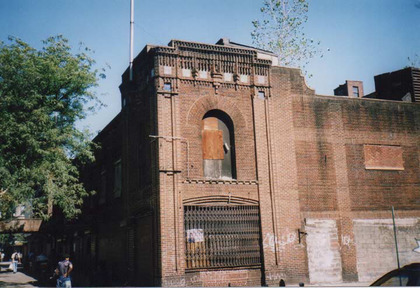 This brick building on Adam Clayton Powell Jr. Blvd. between W. 137th and 138th Sts. was a mecca of Harlem nightlife in the 1930s in its incarnation as the Renaissance Ballroom. The “Renny” offered dancing, cabaret acts and the finest bands of the era, including those of Vernon Andrade, Fletcher Henderson and Chick Webb. Its builders were William Roach and James Sweeney, from Antigua and Montserrat in the Caribbean Sea. The adjoining Renaissance Casino was the home court of the 1920s Harlem Rennies, the first all-black professional basketball team, which racked up a 2588-592 record against other local competition in the pre-NBA era. The “Renny” was razed in 2015; a new residential complex went up in its place. 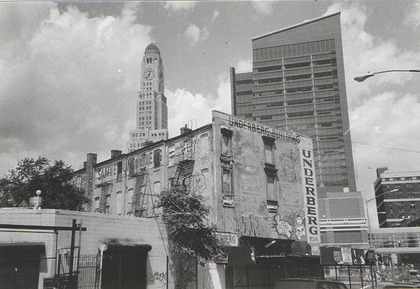 For decades the Underberg Kitchen Supplies building stolidly weathered the changes surrounding it at 5th and Atlantic Ave. in Brooklyn. It was a relic of the era when slaughterhouses and meat packing plants occupied the north side of Atlantic Ave. until about 1975 or so. The old LIRR Brooklyn terminal was a barn that stood between 1907 and 1980, when the building was torn down but the station remained via a staircase underground. By the early-2000s a new station had been built, as well as the Atlantic Center shops, seen here in the background, anchored by a Target.

In 2011 the Underberg Building succumbed, with the business moving further east on Atlantic Ave. In its place stands the faux-rusty Barclays Center, home to the Brooklyn Nets and the New York Islanders. The latter are moving out to a new stadium, scheduled to rise near Belmont Park in late 2021.