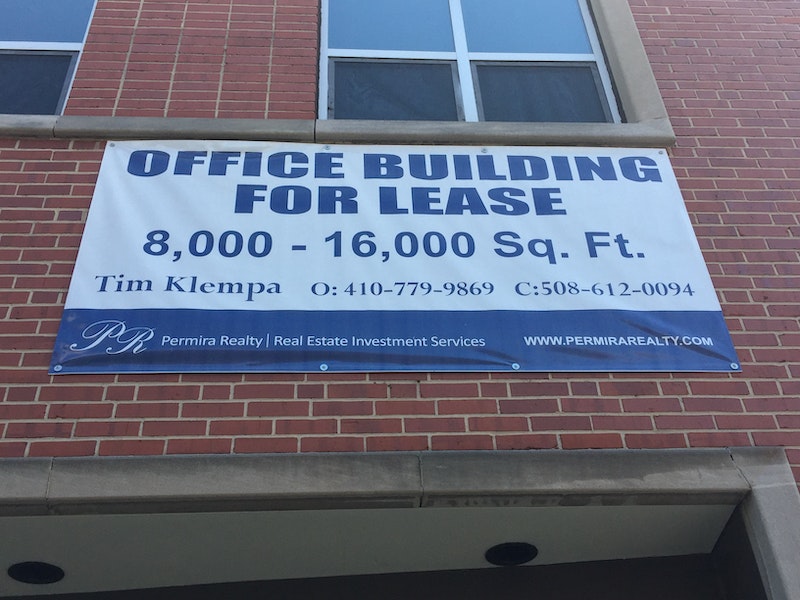 I’m not one for dystopian scenarios—I leave that to my 24-year-old son Nicky—but it’s not hard to envision, a few years from now, wall-to-wall vacant retail and office spaces in America’s cities and suburbs. And not just in malls, the endangered 1980s epitome of Americana, but on open-air streets as well. Look at the above photo—taken just a block away from my office in Baltimore—a fairly pathetic and desperate attempt to rent out up to 16,000 sq. ft. for office space. I imagine that banner will remain at least through the fall—unless the owners toss in the towel and give it away for a song—as a reminder of both the devastation of e-commerce and the decreasing need for employees to work away from home.

In a Wall Street Journal article early last month about the coming glut of retail space, D.J. Busch, an analyst for a real-estate research firm, told reporter Esther Fung: “Most retailers are focusing capital investments on the e-commerce rat race, desperately trying to capture market share. This has left physical retail—the core to most mature retail businesses—neglected for some time.”

It’s not just onetime behemoths like Sears, Macy’s, and J.C. Penney that are shuttering locations, but all brick & mortar retailers, whether independent or part of a chain. It’s bad enough that, as I’ve written about for the past several years, the cultural idiosyncrasies of cities across the country have largely succumbed to mass genericism, but at some point developers will realize that, gee, maybe there isn’t a need for another CVS pharmacy or 7-Eleven, since there are five more within two miles. Same for Starbucks, Subway, Pot Belly, Chipotle, and other fast-food and café chains. What’s the saturation point? We’ll soon find out.

On St. Paul St. in Baltimore there’s a middlebrow chain restaurant—called The Pizza Studio, if you can imagine that—that’s just waiting to close. One, it’s by far the biggest pizza joint I’ve ever seen (reminding me of the Pogues song “Fairytale of New York,” when Kirsty MacColl belts out, “They’ve got cars big as bars”), and two, I’ve never seen more than a couple of people inside. Granted, its proximity to the Johns Hopkins campus might provide a nighttime crowd, but surely that’s not enough to sustain an undoubtedly hefty monthly rent.

There’s a mall located at Baltimore’s Inner Harbor—The Gallery—that’s now a shell, as its former prestige retailers have fled, leaving space, at a discount most likely, for knock-off shoe stores, crummy newsstand/snack food outlets, and low-end tech gadget purveyors. About a year ago, I was at a Starbucks at The Gallery, and the cashier suggested I take my business down the street to a different store outlet. “The coffee’s much better there, and the atmosphere not nearly as depressing.”

Some retailers, because of their specific draw—barber shops/salons, destination restaurants, auto mechanics and the like—will survive, since as of today you still can’t get a haircut online. What I didn’t anticipate a few years ago, even as Amazon was taking over the retail world, was that consumers would purchase clothing online. It didn’t make sense to me: who buys shoes or a pair of pants without trying them on? I was disabused of this ostensibly common-sense notion within my own house, as my wife tapped away at her PC and two days later clothing would arrive. It was a running joke that she’d return half of the purchases, but that process has been refined, and the casualty rate isn’t as high. Besides, e-commerce retailers make the “return” policy very simple (not that I can figure it out), so it’s not such a big deal.

So what becomes of all the vacant buildings that’ll become eyesores in America? I have no clue: if not used for company headquarters or retail, what’s the alternative? Zoning laws can change according to the market, but I doubt most cities are in need of more residential condominiums or co-op apartments. One source of filling space here in Baltimore is to open marijuana dispensaries and legal brothels (the latter which could revive the now-dead E. Baltimore St.). It’s reported in the business pages this year that McDonald’s—the scourge of goo-goo legislators who want to impose regressive taxes on its unhealthy fare—has enjoyed a reversal of fortune by ditching the kale salads and gluten-free slices of pie in favor of what made the giant popular to begin with: burgers, shakes, soda, and fries. But unless there’s another crushing recession similar to that of 2008 and onward, fast-food chains like McDonald’s and Burger King aren’t likely to defeat the trend away from grease and salt and sugar.

Not to be a dark cloud, but ghost towns are right around the corner.