A Grand Way to Cool Off

Newtown Creek and the invention of air conditioning. 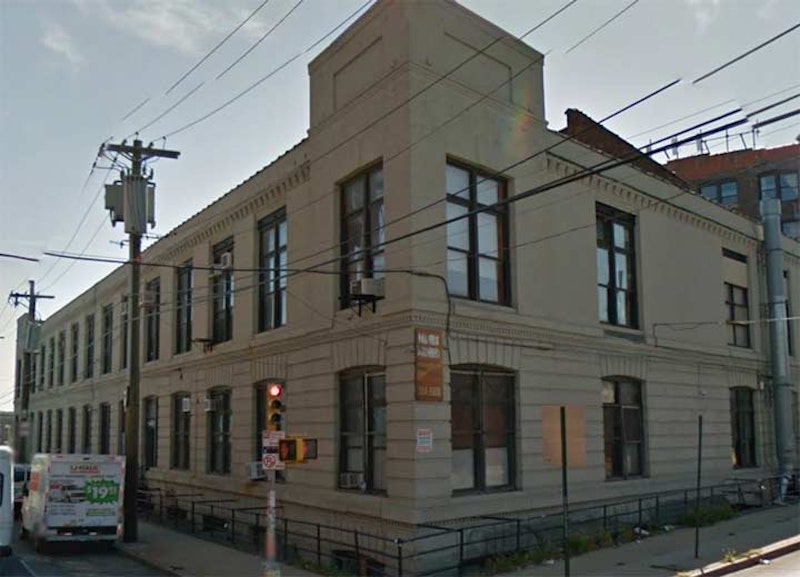 There are a couple of thoroughfares in Brooklyn that have counterparts across the East River in Manhattan. One is Fulton Street, and if you could swing a dead cat far enough, you could actually reach Manhattan’s Fulton Street from Brooklyn’s. The other is Grand Street, but in that case, it would take a prodigious heave indeed, as the two are not lined up across the East River.

Today the terms “grand” and “great” are mostly used as to describe advantageous or good things or happenings, but in terms of how streets were named both in London and its New World counterpart, New York, the two terms have long been used when streets are wider or longer than usual; hence, “Great Jones Street” or the “Grand Councourse.” In Manhattan, Grand Street was unusually wide for the time it was laid out—around 1800, give or take a decade. When Williamsburg was founded in the early 19th century it too had a fairly wide street and was named for its Manhattan counterpart.

Grand Street, as it’s known in Brooklyn, and Grand Avenue, as the road is known in Queens, together are about 120 years old. Grand Avenue was engineered in the late 19th century as an eastern extension of Williamsburg’s Grand Street, and was known as a Street in the early years of its existence before the Queens section became an Avenue, likely to differentiate it from Brooklyn. In Queens, the road’s eastern course overlapped the course of the Newtown Plank Road, which is today’s Maspeth Avenue as far as its eastern junction with Grand and Flushing Avenues. (Flushing Avenue itself is a straightened version of a colonial-era route called the Brooklyn and Newtown Turnpike.)

Even though Grand Street is in Williamsburg, it’s in its southern reaches and thus far has been spared of most of the excesses of the northern Willie, which in 25 years has gone from a burned-out wasteland with Polish and Latin enclaves to a hipster paradise to a riverside mecca with high-rises facing the East River. 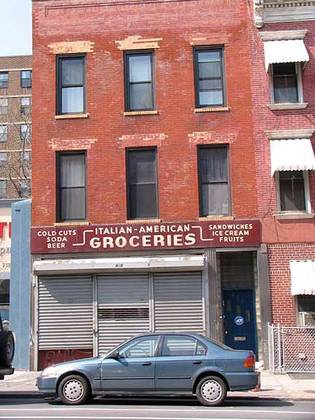 Grand Street remains a workingman’s thoroughfare, with mom and pops spread out along its length, with a few bierkellers tossed in. Nearing Queens, it has to pass over not one but two bodies of water: first the English Kills, where it makes an X with Metropolitan Avenue and is carried over the Newtown Creek tributary by a relatively sedate, conventional 1930s-era bridge that has been given a recent upgrade, and then over the south end of the noxious and noisome Newtown itself, a waterway instilled with every high and low-grade chemical, germ, and virus known to man; nevertheless, the Creek can boast dozens of bird and fish species and even some snapping turtles. 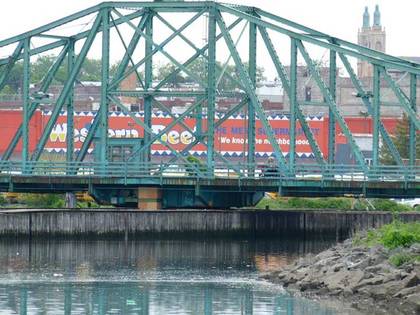 The bridge over the creek is a horse of a different color. It’s a rickety swing bridge that opened in 1902 and when standing on it you can feel each and every year. You can hear the bmmmmmmm of the cars and trucks as they roar over the metallic-grated roadway, and feel the bridge moving up and down when an especially large truck rumbles over. You tread the thin slate sidewalk, likely not replaced since 1900, and stick the camera over the fence, knowing if you dropped it into the creek, it would begin to dissolve immediately.  I’d love to see Vin Diesel and The Rock run a Fast and Furious-style car chase over this thing. 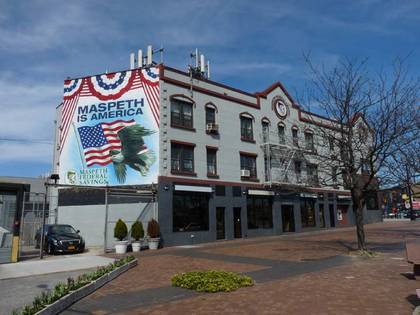 After entering Queens, Grand graduates to an Avenue, as mentioned above, and runs through both an industrial region and a quiet residential region before hitting its stride again in Maspeth, running by a huge flag-bedecked sign at 69th Street that proclaims “Maspeth Is America.” Finally, it twists and turns to stop at Queens Boulevard, where you can either turn east or west or straight ahead, where Grand Avenue becomes Broadway and heads into the hearts of both Elmhurst and Astoria.

As the temperature roared into the mid-80s at the end of April, I was accompanying a merry band of adventurers circumambulating the creek that included Mitch Waxman of the Newtown Creek Alliance, an advocacy group furthering the creek’s eventual cleanup, and Heather Quinlan, the filmmaker behind If These Knishes Could Talk, a filmed examination of the distinctive New York City accent, and an eager adventurer herself.

When we reached Grand Street and Morgan Avenue, Mitch mentioned that air conditioning was invented in the region. Research confirmed that the first air conditioned building in the world was indeed located at 1024 Metropolitan Avenue at Morgan at a printing plant, Sackett & Wilhelms, only a block away. When NYC was in the midst of a blistering heat wave in July 1902, the just-completed plant was turning out the then-popular magazine Judge, which featured color photos and thus used a four-color printing process. The printing plant’s management didn't take into account that Newtown Creek would make the air sticky and humid, causing the paper to expand, the four colors (cyan, magenta, yellow, and black) fail to line up properly, and the ink fail to dry quickly enough.

A junior engineer from a furnace company, Willis Carrier, was the first to figure out that the problem wasn’t, as the now hackneyed phrase goes, the heat, but the humidity. Carrier built a device that used fans, ducts, and perforated pipes to dehumidify the second floor of the printer, where the presses were, and in 1903 added a refrigerating machine to both cool and dry the air. The printing problems were solved with the added benefit of providing a comfortable working environment in the summer months. Thus began a worldwide enterprise that made parts of the United States, the equatorial belt, and much of the Southern Hemisphere much more comfortable to work in and, in some cases, habitable.

And it all happened because of Newtown Creek.