Utica sprawled before them. 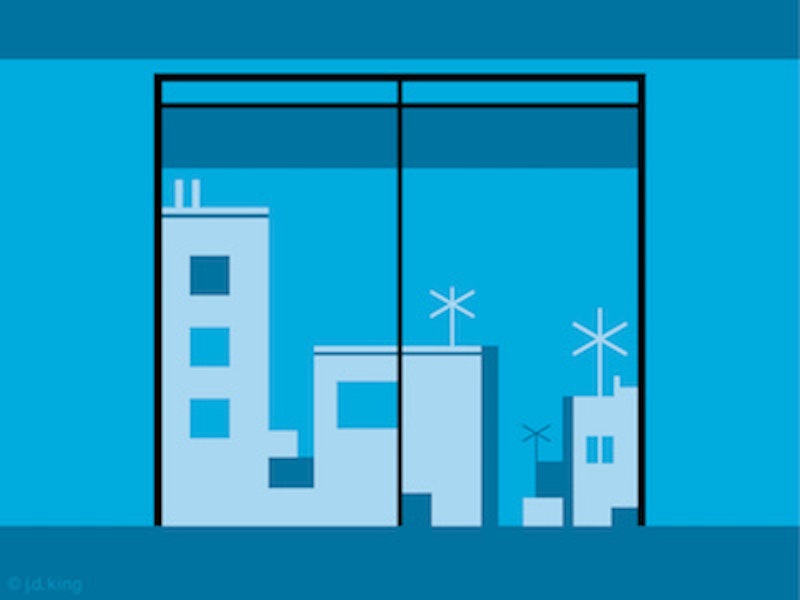 A serialization of the novel The Sound and the Shadows. Last week’s chapter is here.

The Oneida County Department of Social Services building at 800 Park Ave. is tall and modern and, from its hilltop, overlooks Utica. Davy walked through its glass doors, past the elevators, into the waiting room on the right. There he took a number, then a seat, and read The New York Times for an hour or two. The room was packed and noisy, lousy with the underclass, which Davy had to ruefully admit, he was a member of. Again.

While waiting, he’d noticed someone across the room: a woman roughly his age, maybe a little older. She'd attended a good school. Funny how you can tell, in a glance, if someone’s gone to a good school. But more than that, she was peculiar. He could tell that in a glance, as well.

At Window 8, through the Plexiglass, the worker asked for Davy’s papers. He slid them through the slot to her, and then waited while she made copies. Reading the paper, he looked up to see the odd woman standing there. He smiled at her and nodded curtly, then returned to reading, feeling a little like Sergeant Friday. She must have a reason for coming to my window, right?

Her shoes were plain and planted about a yard apart, pointed straight ahead, the toes round, child-like. She wore a dark-green wool overcoat. Parted on the right, straight brown and gray hair almost touched her shoulders. Heavy horn-rimmed spectacles with circular lenses dominated a scholar’s face, accenting royal blue eyes. She had the aura of a nun or a librarian.

She said, “Are you John Kenneth Galbraith?”

“No. I believe he’s dead.” Actually, Davy knew for certain that Galbraith was dead, but he didn’t want to sound like a know-it-all.

“Oh. That’s too bad. He was a good liberal. A true liberal. Do you know what I mean? He opposed SEATO, opposed the US involvement in Vietnam. He knew. He tried to warn them, but they wouldn’t listen.”

“I’m from Neptune. I arrived on Earth by plane. I wasn’t born on Neptune: I just lived there for a while, before coming here. I can’t remember what planet I’m from, or even which solar system, but the people where I was born live longer. A hundred sixty years is average. No radiation!”

“I’m in the Adirondacks now, with a cousin.”

“Yep!” Even though she was looking right into his eyes, her gaze was somewhere else, another planet. “My nephews are attempting to infiltrate the American political system, but they’re British, so how can they be allowed to do that?”

“I don’t know. I’m an MIT grad, Boston. I’d prefer to be from Denmark, to live in Copenhagen. I think that things are pretty close to perfect there. Peaceful.”

“Life was better on Neptune, easier. Peaceful, like you say. I don’t know why I came here. But I like you.”

The administrator returned to the window, gave Davy his papers.

“For now, yes. Someone will be in touch with you within 30 days.”

“Okay. Thanks so much.”
As Davy straightened his papers, the woman in the green coat took a step closer to him. “Let’s get a coffee. My name’s Potato Chip. What’s yours?”

“My name’s not really Potato Chip! I was just fooling. My name’s Harlow Bundy. But I’m called Potato Chip because I’ve never eaten one single potato chip, ever. Not one!”

“Harlow? That’s a nice name,” Davy said as they walked towards the big glass doors, Utica sprawled before them.

When Davy falls in love, bells clang in his belfry like a three-alarm fire. He wasn’t getting that now from Neptune Girl. Then, in the distance, a bebop pianist ran shivery lines up and down a Steinway as Davy drew into focus a little Greek island: bright white buildings, a sparkling sea as deep blue as Harlow’s eyes.

He was on his way. Possibly. They were reaching the coffee shop when Harlow turned to him with a stare as serious as a fatal car wreck and said, “By the way, don’t get any ideas. Don’t ever touch me.” Then her face brightened, sun bursting from a swept-away cloud. With a tone as fresh as clean laundry, she said, “Now you may buy me a cup of coffee, kind sir!” He held the door for her, keeping a courtly distance.

In a booth, Davy listened as she spooled out wide glorious ribbons of paranoia, highways of nonsense stretching to lands far away, touching down on various continents, planets, and a solar system not ours. Despite her warning, bells rang their love peals in his skull. How to melt her icy heart, to capture her fleeting mind? What’d gotten her to such a state?

Talking, Harlow leaned in, her coat opening enough to reveal a snubnose .38 holstered to her ribs, an element of danger that only whetted Davy’s appetite for the forbidden fruit of Potato Chip. Time to turn on the charm, as much charm as a 50-year-old alkie living in a flophouse, re-upping for public assistance, can muster. He wondered if she was a virgin. Maybe. Probably. Oh hell, definitely. There’s something too innocent about her. Well, if platonic it must be, platonic it shall be. It’s a thrill to be in her presence. Her mind, however byzantine and screwy, is incandescent.

From the coffee house, they strolled up Genesee St. to Munson Williams, Utica’s art museum, an oasis. Past the Calder stabile out front, in the glass doors of Philip Johnson’s gray granite block the odd couple went. Walking up to the Pollock, Davy turned to Harlow and said, “I don’t believe in God, but if God does exist, all I can say is, He’s a sadistic bastard.” She didn’t seem to hear. Instead she led the way upstairs, not stopping until she came to William Merritt Chase’s painting, “Memories.” There she paused, staring for a long time at the portrait of a woman in a long white dress standing before a table piled with papers. Taking a few steps back, Davy marveled at the artist’s brushwork. How did Merritt manage that, to get something so crazed yet specific?

“Look at her eyes,” Harlow said. “She has something to tell us in our century. She’s an educated, even questioning, woman. But in the 19th century, she’s tethered. He gets the acclaim. But look at her eyes: with the resignation, an anger. She’s smarter than him, and she’s furious. Merritt spins a story with this painting, unwittingly. It’s like a home movie, but one with a plot, a character.”

They spent rest of the afternoon looking at, studying, almost memorizing the David Smith sculpture, Mondrian’s horizontal tree, the Klee, the Ashcan School paintings, the Stuart Davises, while Harlow lectured Davy on the history of Edward Wales Root, local scion and collector of modern American painting, amassing a collection that became the skeleton, muscle and some flesh of the Munson Williams collection.

At Warhol's electric chair painting, their fingertips grazed its surface, picking up a current from the heavens, their feet grounded to the floor.

They left at closing, and he walked her back to the municipal parking lot near 800 Park. On the way, he pointed out how this area suffers from a dearth of florist shops. “And what does that tell me? Not only does Utica not have a bookstore or a record store, it’s devoid of romance. What do these guys buy their wives or girlfriends on a special day? A skillet? A vacuum cleaner? Utica’s few florist shops are for funerals. This city is reeking with the stench of death, if you ask me.”

Harlow sat behind the wheel, window rolled down. Davy peered into the 1953 Packard sedan, and noticed that it barely had 15,000 miles on its odometer. The car’s finish was pale green, accented by a tan interior. There were no dents, no rust. As she drove away, back to the north country, he felt an acute sense of loss. It clung to him like a drowning man as he worked his way back to Spilka’s Hotel.

Davy no longer had a car. His first night at Spilka’s, someone smashed the driver’s window and stole the radio/CD player. In short order, anything worth something disappeared—alloy wheels, battery, seats, knobs, spare tire—until vandals set the husk ablaze. The cremains sit there.

The sky was dark when he returned to Spilka’s. He walked past the sidewalk garbage, up two steps, in the shabby front door, up creaky stairs to his room. Lying on the bed, fingers laced behind his head, he thought about Harlow, their day together, and wondered if he’d ever see her again. In another tenant’s room, a TV played too loudly.

He went out for a bottle of gin. Upon returning, he twisted off the cap and guzzled, smacking his lips, holding the bottle aloft, admiring it. On his little bed, leaning against the greasy wall, he closed his eyes and focused on the sound the next room, its reality show punctuated by commercials. Was anyone home next door or had they left with the TV on?

Davy was out of money, down to small change, the last of his bills spent on this bottle, all of Helen’s fortune gone. He said, “I’m hungry.”

From the floor he picked up Sunday’s New York Times crossword. Stymied after solving about half of it, stuck like a pig in muck too deep, he made a sudden breakthrough, the upper left quarter falling into place, the answers gushing: coach, allay, caw, all, Calcutta, Celia, assured, abrupt, see-saw, sandwich bread...

A good omen! All will end well! Don’t give up the ship!

He said, “I’m hungry!” The TV played on, its voices voicing no concern regarding his lack.

Another swig of Beefeater. He drank carefully, cautious not to waste a drop, pacing his intake to maximize the high.

“I’M HUNGRY!”
Davy liked gin, liked its sophisticated air. It spoke to him. He had conversations with it, like some people have with God. And when it spoke to him, it told him tales about fine high-fidelity equipment: speaker cabinets of oiled walnut, amplifiers with brushed aluminum faces, knobs weighted with authority, a turntable arm lighter than mist. It spoke to him of a happy marriage and a post-war Jaguar, of an unfettered life in Cambridge, Massachusetts. He drank some more and dreamed, dreamed he was on an Ipanema beach, drenched in setting sun and bossa nova, the white sands turning indigo with night. Something tall and lovely samba-danced to him, filled with Afro-Spanish warmth, her eyes brimming with love for Davy and Davy alone. Patient with his quirks and wrinkles, her all-knowing mind perceived his very weaknesses as attractions, crossword puzzles begging to be solved.