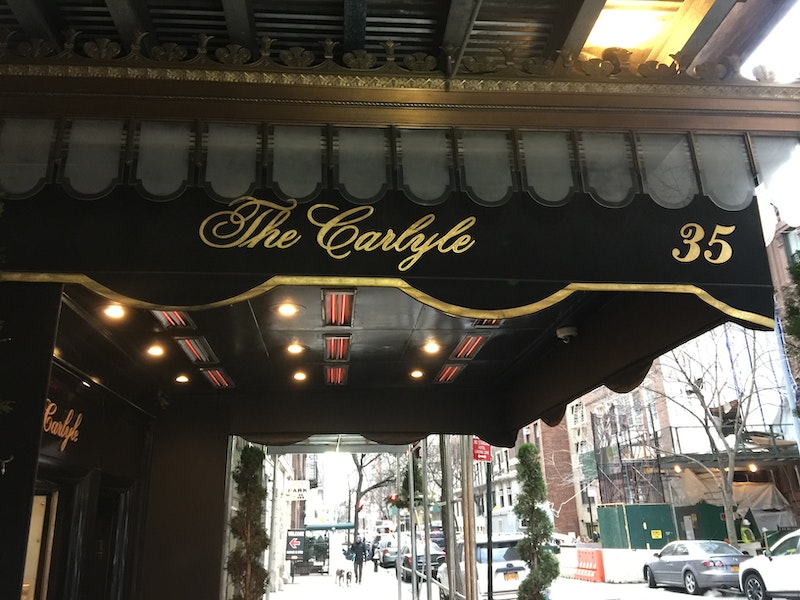 During visits to Manhattan I almost always stay at the Peninsula Hotel at 5th Ave. and 56th St., for its location, impeccable staff, and cosmopolitan élan. Earlier this week, however, I opted out, since it’s diagonal to the White House North, aka Trump Tower, and the reports of traffic snarls and throngs of thrill-seekers and protesters wasn’t my idea of convenience. Instead, my two sons Nicky and Booker and I lodged at the fusty and legendary Carlyle Hotel—opened in 1931—at Madison Ave. and 76th St., my first time there since 2009. The spiffy Rosewood chain purchased the Carlyle in 2001, but apparently there was some sort of language in the acquisition that assured the hotel would remain unchanged, with no grand alterations. It’s a place that reeks of old money, where bluebloods revel in the slightly down-at-the-heels small rooms, aging furniture, and quite proper employees. The world does change, so the guests’ dress is semi-casual—I saw just four men in monkey suits—but I doubt any of the regulars are happy about it.

Upon arriving in the lobby early Monday afternoon, a large photo of Jackie Kennedy struck me—from London in 1962—and thought just how rude that was, inadvertently or not. Part of the Carlyle’s storied history is that John F. Kennedy, for the last 10 years of his life, owned an apartment on the 34th floor, and it was his low-key hideaway for frequent trysts. I imagine some presidential business was conducted there as well, but it was the babes, including Marilyn Monroe, that provided the spice. Nicky noticed it too, gaping at the photo, but I told him I had dibs on the anecdote, which he assented to, however grudgingly, in his Wednesday story about the Upper East Side.

That said, the Carlyle is a quality hotel, with room service that’s lickety-split, and very accommodating front desk personnel. It’s just so dowdy, the destination of choice for rich people who like to pretend they’re not loaded, and certainly not nouveau riche, kind of like—from what I’ve read—the Kennedy compound in Hyannisport, MA, where rugs and chairs are threadbare, and the late Rose Kennedy was tight-fisted, which is a point of pride. In the Carlyle’s rooms there are all manner of lights: some are turned on and off manually, others by an all-purpose switch, and there’s darkness, not to say gloom, that permeates the entire hotel. The elevator situation is odd, too, at least in 2017: each one has an operator, which I find off-putting, although the men are friendly gentlemen. It’s just weird to notice the juxtaposition of a fellow asking guests what floor they require while the passengers are texting on their smartphones. The Carlyle isn’t quite as expensive as the Peninsula, and certainly not the Four Seasons, and I did like that it’s just a 10-minute walk to the Met, where Booker and I caught the last day of the “Max Beckmann in New York” exhibit. (I’d read no reviews of the show, so was disappointed that aside from masterworks like “Bird’s Hell” (1938) it was mostly later landscapes and a slew of self-portraits. And the Yankee Stadium crowd there on Monday afternoon was maddening: loud and obnoxious culture mavens, elbowing their way to the front of certain paintings, making it impossible to see.)

If this sounds like carping for the sake of it, well, that’s probably correct. Can’t help myself, sugar pie honey bunch, as Levi Stubbs, were he alive, would high-five me on. In reality, unless you’re in a hovel, it’s hard to go wrong with most uptown hotels. We had a wonderful dinner on Monday night with old friend Michael Gentile at Caravaggio, a Smith family favorite on E. 74th St., and in between bites of a mound of burrata atop perfect prosciutto, veal, and fettuccine and swordfish, Michael went on a rap about how preposterous Soho is today—he lives on Mercer St.—and when I mentioned that when we worked together at New York Press in the '90s it was already a shopping mall, he said it’s now out of control. For example, one day in January, walking outside he saw a blocks-long line on LaGuardia Pl. and wondered what the commotion was all about. Maybe a just-announced Springsteen show at a small club or a Resist Trump action. Instead, and he grew animated at this point, “It was for a new cookie dough store. Can you fucking believe that?” Well, sure, cookie dough and artisanal cocktail onions must be recognized, as long as they pass the intersectionalist/farm-to-table/gluten-free test.

Michael and I nattered on about doses of Mr. Natural and windowpane LSD, long-ago concerts, youthful mischief, and of course our respective list of aches and pains. I don’t think the boys were too interested in the health issues, but both are suckers for oral histories of pop culture from decades ago.

And though it’s a bittersweet thought, if you haven’t lived in NYC for a spell, when coming back, it’s sort of as a tourist. For example, I’d conservatively bet over 100,000 people have had their pictures taken next to landmarks like Bleecker St.’s The Bitter End (picture below of Nicky). I did in ’68 and five years later my Texan roommate at college, on his first trip to the city, did as well. I’ve seen a number of shows there, most notably Jerry Jeff Walker at the end of the 19th century, as well as Randy Newman and David Bromberg. In the summer of ’74, I stayed in a Village flophouse—$5 a night, no lock on the door, where I felt like an angel simply smoking a joint on the premises while very rough young men and women were shooting up, and leaving puddles of puke in the lobby—and saw Taj Mahal at some forgotten venue. Cookie dough boutiques were not in sight, but Orange Julius was. 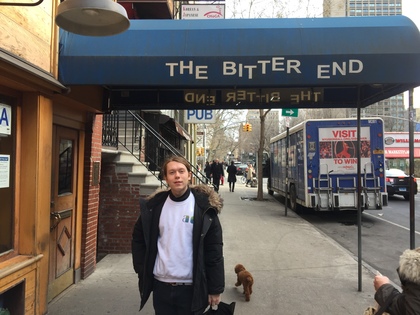