How RQ curved La La Land and its asshole director. 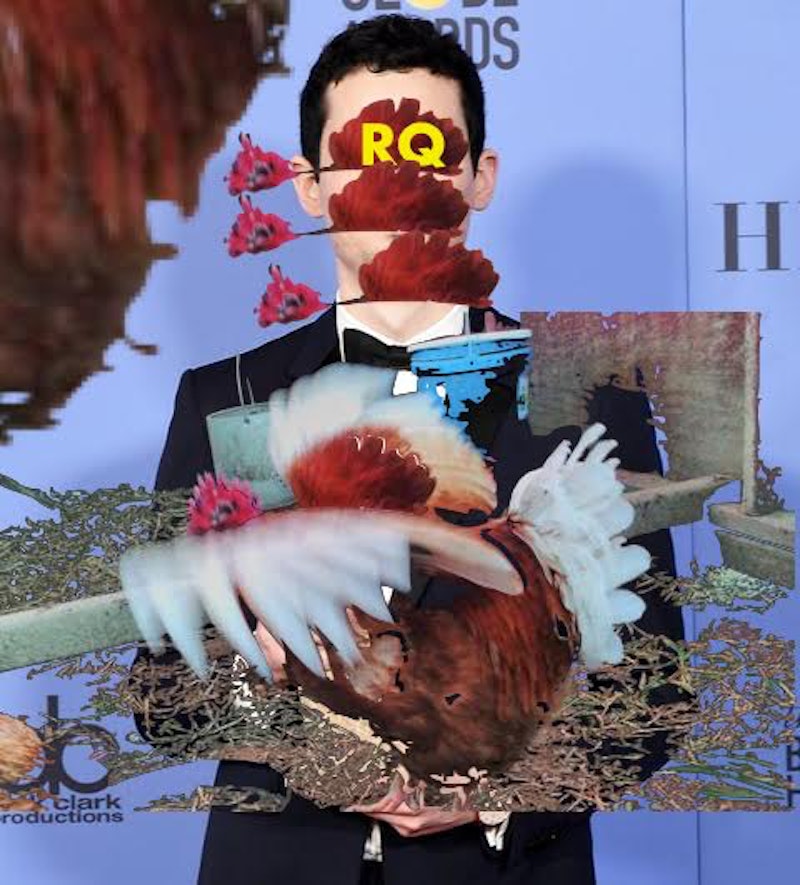 Please don’t blame Warren Beatty. It was my fault. Let me explain: I campaigned for Moonlight. I hit the Hollywood beat regularly in the past couple of months trying to drum up support for Barry Jenkins’ film over the vastly overrated and culturally questionable La La Land. Damien Chazelle is a real prick, a guy with seriously misguided ideas about art and authenticity and what it means to be “real.” It’s all bloodsport to him. I hated Whiplash so much I spur-clawed the screen halfway through and had to be escorted out the emergency doors. Needless to say I haven’t been back to the Silver Springs AFI Center since 2014. Not that I’d want to go back, really not very accommodating, nor comfortable. Bad acoustics. I don’t care for the place.

But I decided to follow Chazelle around to see what he was all about. Whiplash betrayed some seriously dark misanthropy and jock violence that does not belong in the arts—I needed to know what was in his heart. So I moonlighted on the set of La La Land as an extra and got to know R.G. quite a bit. He’s really a very nice guy, extremely quiet, generous. But I don’t think he should be acting. I think he’d make a good waiter, or sous chef. Great bone structure. But he belongs in the kitchen. Anyway, Emma Stone looked at me like a piece of meat so I left some business on her car a couple of times. All I could get out of Chazelle was that his favorite movie is Saw IV and he’s contractually allowed to punch crewmembers on his sets. Very plush treatment by the studio. Interns volunteered to be receivers of his rage. I lived a lot, but I didn’t learn much.

So of course I whipped up the excitement for La La Land before it had its world premiere—I designed the poster, developed the film in my bathtub, and bribed more than 50 prominent film critics and producers with money and drugs to get their assurance that they’d vote to make La La Land the most winning movie in Oscar history. But I never wanted them to win. Chazelle was such a cocker, and I really loved Moonlight, so I rigged the envelopes and for a second it looked like I fucked up. But luckily the assistants backstage—the only other people with envelopes—had mine, and they didn’t notice that it was written in Crayon. I probably shouldn’t have dosed Warren Beatty with sodium pentathol and poppers in his dressing room. Too easy. Faye Dunaway thought I was an oversized moth. She had a panic attack and fell to the floor. Maybe that’s why she was overeager in reading the WRONG winner. I stole all of Chazelle’s blow while he was on stage and did it all in the back with Bennington while shit was going down, it was wild. But I had to get that out of the way to talk about something I wasn’t involved in at the Oscars and would like to wash my hands of.

The tourist surprise bit? Americans have no class consciousness much? Watching that made me sick. What a privileged surprise for the cretins of sidewalks and tour buses to kiss the knuckles of the beautiful people and be herded along like cattle by Jimmy Kimmel, who tried his best and came off a bit too much like that cad Howard Stern (I never liked either of them). It was nauseating watching these rich celebrities negotiate how to deal with these street people and their selfie sticks and their “weird names” (fuck you, Jimble Kimble). The bait and switch of the Best Picture announcement was a ruse to cover up the true disgrace of the evening, that fucking parade of the have-nots against the haves.

But I still left the Kodak Theater with Damie Chazelle’s blow. Not a bad night.