I don’t preach peace and love. 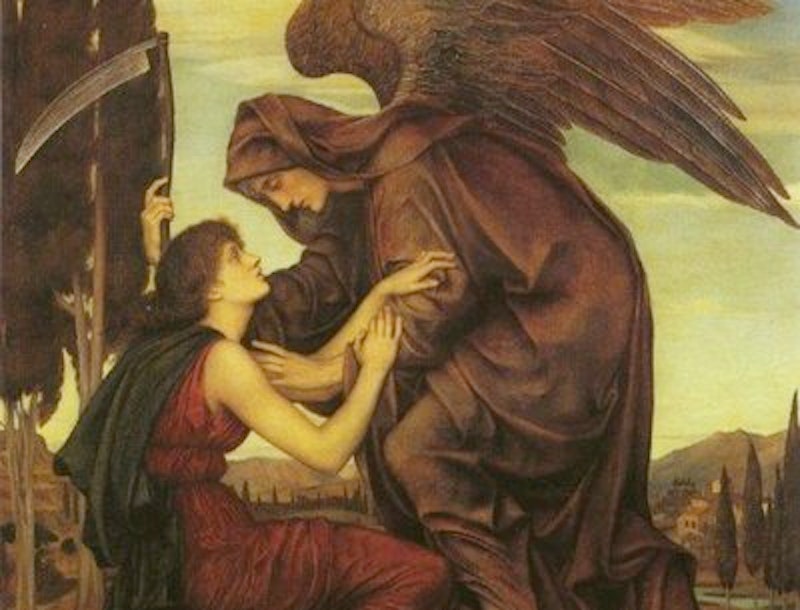 Voltaire famously quipped, “Those who can make you believe absurdities can make you commit atrocities.” Religion is the ultimate absurdity, and with the noteworthy exception of the Bolshevik genocide against Russian Orthodox Christians, the most horrific atrocities in history have been committed in the name of God. Belief in an anthropomorphic creator God who takes a keen interest in the minutiae of everyday human affairs is completely irrational and clear evidence of derangement. Unable to comprehend adult human beings praying to an invisible friend for favors and protection, I took a keen interest in religion at an early age.

Raised as an American Baptist, I began my inquiry with Christianity. I found out pretty quickly that modern Christianity was at best a very distorted series of mistranslations and selective editing of the ravings of a mad Palestinian mystic attempting to overthrow the authority of the Sanhedrin Rabbinate, and at worst a pastiche of the various regional “dying god” myths associated with the development of agricultural society crafted to reinforce existing social hierarchies and injustice by promising that well-behaved slaves will receive pie in the sky when they die.

I next examined the staggering complexity of Hinduism. The sacred texts read more like an alternative history than a religion. The Upanishads consist of sound straightforward philosophical ideas, but the Mahabarata reads like a science fiction novel describing a war between two highly advanced civilizations. My studies of Hinduism resulted in a lifelong fascination with the missing millennia of human history and the notion that there’s a lot more to our past than the simple narrative that civilization begins at Sumer. Standing on the summit of Mount Meru, one can almost glimpse the shores of Atlantis.

Of all the sacred texts I examined, the Dhammapada made the most sense. The tenets of Buddhism are less concerned with an external deity or afterlife than the basics of living a satisfactory and rewarding life. It’s a very practical set of rules that boil down to “Don’t be an idiot.” The best modern exponent of Buddhism is Alan Watts. Lately I’ve listened to his lectures on YouTube, and recommend them as an antidote to the hysteria currently raging across the globe.

By comparison, the three great Semitic traditions are insanely paranoid and relentlessly genocidal. Judaism is predicated on the idea that only the Jews are fully created in the image of God, and that gentiles are mere beasts of burden, created by God to serve the Chosen, like donkeys or cattle. The Talmud is unquestionably the most viciously racist religious text I’ve read yet. You won’t find it at Barnes & Noble, with very good reason. Gentiles are forbidden to study it, under penalty of death by stoning. It goes a long way toward understanding why the Jews have been expelled from 109 countries. It codifies and enshrines hypocrisy and deception as social strategies.

The Koran is merely a revised version of the Bible, with an insanely expanded set of arbitrary rules and regulations and the same twisted concept of eternal punishment for disobedience to the impostor demon at the center of it, dumbed down for the kind of semi-literate peasant that needs just one book in his life. It’s aimed at men who have trouble getting laid. It takes the inherent misogyny of Judaism and Pauline Christianity several steps further, relegating women to the status of cattle.

I’ve studied Satanism and its variants at great length, and can say with some authority that there’s nothing of value there. It’s Ayn Rand in Goth drag, an empty sales pitch for selfishness and a never-ending cottage industry of occult trinkets and books.

I used to dismiss the Wicca as a clearly synthetic invention of no greater antiquity than the incandescent light bulb, but I’ve come to admire them enormously. For all of their silly delusions of antiquity, the fact remains that they worship nature, and can prove that nature exists. That works.

I can tolerate Jews, Christians, and Moslems. If they can’t tolerate me, that’s fine. As the old saying goes, “God made men, but Colt made them equal.” The Semitic religions prance around preaching peace, love and killing people. I don’t preach peace and love.