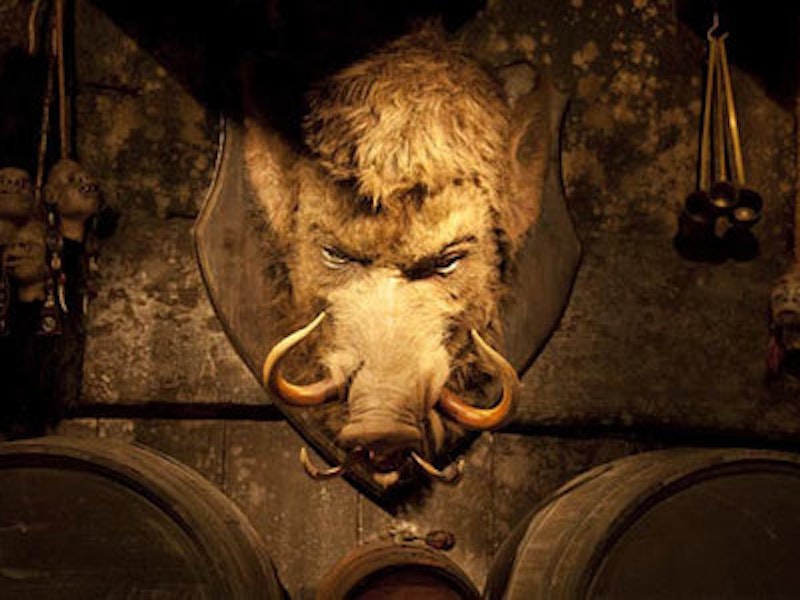 We, the heirs of Roberto Bolaño, as part of our continuing effort to publish every single thing that Roberto ever wrote, even such classic comic inclusions as his laundry and shopping lists, so that one might read aloud a description of a hideously burned man who lives in a pile of rental boats on a Spanish beach and then suddenly begin to say “six white dress shirts, no starch,” have determined to release this short excerpt of one of Roberto’s last novels, which takes the form of Harry Potter fan fiction, yet is so obviously much more.

PART ONE - GRYFFINDORS LOST IN HOGWARTS

After Professor Trelawney’s idiotic argument with Ulises Lima, which was such a distressing scene that I don’t want to talk about it, I stopped attending Divination completely. In fact it had been weeks since I had gone to class at all. I spent all day in my bed reading Sor Juana and at night I went to the Hog’s Head, where I drank butterbeer and wrote poetry until three or four in the morning. The regulars at the Hog’s Head were generally gruesome and even when they sat still and completely silent for hours they gave the impression of returning from a violent crime in an alley or from giving ass in the broom closet. A waitress brought me a meat pie and asked what I was doing. I’m writing poetry, I said.

One night as I was leaving, or rather an early morning, a particularly cold morning like smashed china, with a white rising sun that made me think of Balkan mass graves, I ran into Xenophilius Lovegood, who was walking next to a beautiful girl (a squib, it turned out), in a complete frenzy. They street was empty except for them, and I could hear Xenophilius explaining something, or pleading, or possibly even telling a joke.

We had met only one time previously, at an unimaginably sad party thrown by The Quibbler. I was certain that he wouldn’t remember me, but he saw me and trotted toward me like a street dog, like an animal whose face is so alien and opaque that you have no idea if it is going to embrace you or pull out your intestines. I remembered that he had insisted that I call him Xeno, everyone called him Xeno.

“Hello Baltasar Butterchurn!” he shouted, again like a dog, or like the first half of an echo. He insisted that I come with him and the squib to a New Year’s celebration, which somehow seemed like an excuse for his behavior with the squib, which was frankly shocking, or like the moronic proposal of a drunk. In fact he and the squib both seemed drunk although I don’t think they were, and as far as I knew Xeno never drank. At any rate in the taxi he began asking me about the wizarding world avant-garde, as if I were an official representative. Are the Wyrd Sisters avant-garde, he asked me, do you consider them a part of it? I gave a moronic answer, too moronic to record.

Outside the Lovegood house it was immediately obvious that something was wrong. Or maybe it was obvious only in retrospect - everything was exactly the same, the ugly garden, the gate, the black stone of the tower, but with a sense of difference, which I later learned was because of the siege. One of those idiotic wizarding cars, a yellow Vauxhall enchanted to sort of bound rather than fly, was parked out front, actually partially in the stream. I could see the silver masks of the two occupants, staring at us. One of them got out and leaned on the hood, holding his wand. As we walked past he cast the Gropiatus curse at the squib. She screamed and Xeno and I reacted with perfect cowardice.

I remember seeing him in the hallway after potions class. We were all walking away, or should I say fleeing, leaving the classroom at any rate, which was like crawling out of a sewer. He was walking towards us with two other Gryffindors. They were talking or conferring with one another in total seriousness, which was exactly the kind of thing they were always doing, pacing around the corridors talking. That’s them Narciso said, and God knows what they did to Gilderoy Lockhart, he was never the same. It was only a matter of time until someone did something to him I said.

Supposedly someone had seen Lockhart at the Three Broomsticks making a complete fool of himself. Or in one of those brutish scenes at The Hog’s Head, on a dance floor packed like something from the holocaust, surrounded by grisly human specimens drawn it seemed from the saddest portions of the Morte D’Arthur, or like the waiting room of a pornography studio.

The others with him were that little red-haired boy with the eyes of a a teenage moron and the girl who was famous for being Muggle-born and for having no sense of humor. She looked like a rattlesnake to me, like she was lifting her head off the desert dirt, which is another way of saying nothing at all, and looking off into the distance at something approaching or beginning to approach, a storm, or a giant. Of course we didn’t speak to them, it would have been unimaginable.

That afternoon Narciso and I walked down Calle Chimaïra and turned on to Caldrón. The street was completely empty, like there had been an air raid, and the plants, or little trees, outside Dingle Durlington’s book store looked like a sad diorama of themselves. Narciso and I spent most of our time in book stores like Durlington’s, arguing, or trying to meet famous authors (we saw Rita Skeeter once, which was like being in the ocean and seeing the shadow of a shark), or stealing books, or if we felt sorry for the owners sometimes buying them, though god knows we didn’t have a single knut to spare.

Dingle Durlington sat at an enormous desk at the back of his store, which smelled like a gymnasium and was filled with the most hideous garbage imaginable. He was extremely fat and his stomach touched the desk and Narciso said that when the aurors finally came for Dingleman they would have to use their brooms or some sort of specially designed machine to get him out. About a year after this I heard that  Dingleman had gone to Azkaban during one of the Death Eater pogroms and that he had been castrated and murdered by the other prisoners.

This was before Hermione began her ridiculous purges of SPEW. Every few days another owl, or sometimes even a Screamer, announced a new group of assholes who had been kicked out. No one dared show his face in the Room of Requirement. They kicked out people who we didn’t even know had been in SPEW. Slytherins, the kitchen staff. It was a purge of something much worse and much emptier than a greasy insect, a plastic bag.

The problem with the wizarding world, I said to Narciso, is that we somehow believe that we have a literature, which is to say, a national identity. But who do we have who can even form a coherent thought? Newt Scamander?

And what about Rita Skeeter, I asked him. The ghost of a faggot.  Gilderoy Lockhart? A tissue paper queen. Beedle? A fossilized homo. Worple? A fruit with queenly airs. Dear old Bathilda? A saintly twink. Who is any good? Dumbledore?

Narciso smiled. He is the worst of all.

Everything really came to an end with that whole affair surrounding the sock, which was so pathetic that no one could even look directly at it, you had to catch it from the corner of your eye. I ran into Hermione Granger in the library one time after everyone knew all about that grisly episode and we talked a little bit about centaurs. I asked her what he had done with the sock. He suspended it from a clothes line, she said, in the courtyard. He wanted it to experience events, to be part of time and weather, instead of telling its own story. It was supposed to listen. I thought she was cracking up.

Yes, I knew Harry and the other ones also. Which is not to say that I knew them well. After six years at Hogwarts I should have, of course, but one of the problems with the wizarding world is that we have never learned to be isolated. We cannot even be isolated in a drafty castle in Scotland. And of course no one knows anything about the Muggle world, which surrounds us like an ocean, but no one is willing to turn inward either, I think because we are afraid that we won’t find anything, or we will find a pamphlet of shallow aphorisms and perhaps a wand catalog.

But no one stays around the school long enough to begin to ask this question. You look out, to the west, and every day you see the same endless parade of students heading to Hogsmeade, like a senile snake, coiling into those dark hills, which somehow contrive to be dark even when covered with fresh snow. And what do they do in Hogsmeade? They eat and shop, because as everyone knows but cannot say the central, ever-present task of every young wizard is to suck up to the Muggle world, to run alongside it like a coyote picked out from time to time in the flash of headlights loping on the same black dust as the rest of England.