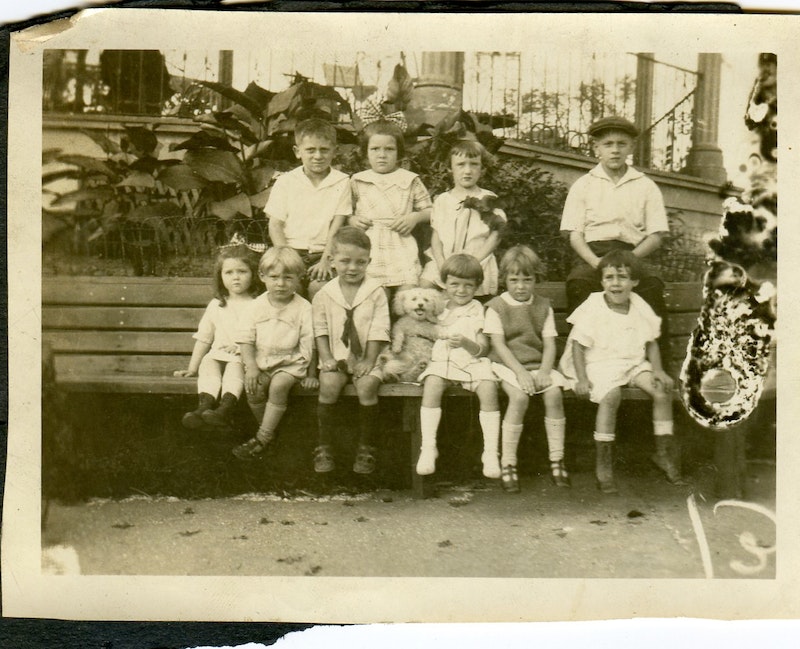 Last week I was rummaging around our cellar looking for a 1970 issue of National Lampoon for my son, and inadvertently came across a taped-up box of pictures and letters that I took from my mother’s New Jersey house after she died in 1983. I thought I’d seen all of the photos from her youth in the Bronx, but this was fresh material. Better late than never: I’m nearly as old now, 61, as she was upon taking the last Train to Clarkesville. You can get lost in this sort of family memorabilia, and though I just cracked the upper layers, there were a couple of photos that caught my eye.

Above is a shot of my mom in 1925 (she’s eight, and third from the left), presumably on what passed for a field trip at her parochial school. The young fellow at the top right, wearing a newsboy cap, looks like a bruiser, and though it’s idle speculation, I’m betting he did a stretch in the can for armed robbery, or was a brass-knuckles lowlife who earned a scrap of a living working for the Irish mob. In reality, he was probably a lawyer or a doctor who worked like a dog battling immigrant prejudice and lived a splendid life. Or maybe he was knocked off during World War II. You see what I mean by getting bogged down in examining artifacts of the past?

The picture below is of my mom, grandmother—who died the year after my birth, but not before pinning the nickname “Porky” on me since I was over 10 pounds at birth—Uncle Pete, and in the back, an adolescent Uncle Joe. It was the summer of 1929 in Northport, Long Island, where they often stayed—at a modest house either rented or bought—and of course no one anticipated Black Tuesday and the start of the Great Depression just months later. As it happened, my grandfather was a wily sort, a retired cop who’d made some influential friends along the way, and he sold his positions in the market before Doomsday arrived. Or so I was told: perhaps it was apocryphal, and since he died in 1948, I never had the opportunity to get the skinny from the horse’s mouth.

I’ve written about Uncle Pete before, and will again, since a mere 800 words can’t capture what an idiosyncratic, what-me-worry, jovial view he had of life, not just growing up, but with his own family of four kids and my Aunt Peggy. Pete might’ve had the best sense of humor in the family: Joe was a stolid, upright citizen; my Dad was a loving and brainy guy, but couldn’t crack a joke to save his life; and my delightfully eccentric mom, bless her heart, was never intentionally funny, although her expressions and euphemisms (no swearing) are still scattered in my own vocabulary.

The following excerpt is from one of Uncle Pete’s family history letters—written specifically to my oldest brother in 1990 when Pete was 70—wasn’t unearthed in the above-mentioned box, but it dovetails nicely. It was 1939 and my mom and dad were dating (married in 1940), and Pete writes about “chaperoning” mom up to my father’s New England home, because “In those days, people were more conventional, and my parents wouldn’t allow a young couple to go on their own.” He continues: “Driving home [from New Hampshire] I took my turn at the wheel in Harold’s [my dad] car. I smashed into the back of another car, and it was my bad luck that a real tough guy got out really fast. He was ready to make mincemeat out of me. But he had one eye on Harold, who sat next to me, and started to calm down. I said I was sorry, that I was sleepy. Kay [my mom] an excellent back-seat driver, was in the back. Harold never said a word. He didn’t have to. There was something in the look of his eyes that would advise anyone to back off. The accident was really Uncle Joe’s fault. He taught me how to drive, and it’s to my credit that I took all the blame.”

This was the old world, of course, when letter-writing was commonplace, and my mother was no slouch at posting missives—complete with barbs and putting out the “official story” on family misadventures, these days called “spin.” When writing to my oldest brothers at college, she always, in capital letters, printed “SAVE MY LETTERS.” Why, I have no idea: I doubt she ever looked at them again, but today it’s an illuminating diversion for me.

For example, in March of 1964, she apprised the older boys of my 17-year-old brother Doug’s most recent scrape with Authority. She writes: “Doug set off an explosion down at the church [I had no idea Doug went to church at that age: he must’ve had an agenda] when he disputed the views of several clergymen at a panel discussion. He had books and notes to document his doubts about the existence of God and naturally there was quite an uproar. Now the entire congregation is praying for him. They’re not angry at him, just very sad at the loss of his faith. Don’t let on I told you this, as the less said the better. I don’t want him encouraged one way or the other—it’s his problem, not ours. Love, Mom.”

I dug this unknown tidbit (at eight, I was kept out of the loop, although my bullshit radar was pretty acute, as I eavesdropped on my parents’ discussions at the breakfast table), just further evidence that Doug, who passed away in 1999, was the family’s first beatnik/hippie, campaigning for JFK—my parents hated all Kennedys—organizing hootenannies in downtown Huntington, diving into the mid-60s counterculture with real zest, and spending a couple of years in Afghanistan with the Peace Corps.

It’s unlikely I’ll get to that box again anytime soon, but it’s there waiting. 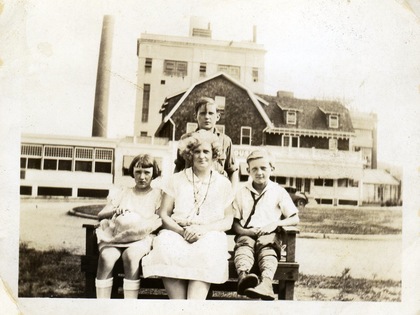