Remembrance of Animals Past

Rooster reminisces about his early days with the Animal Collective. 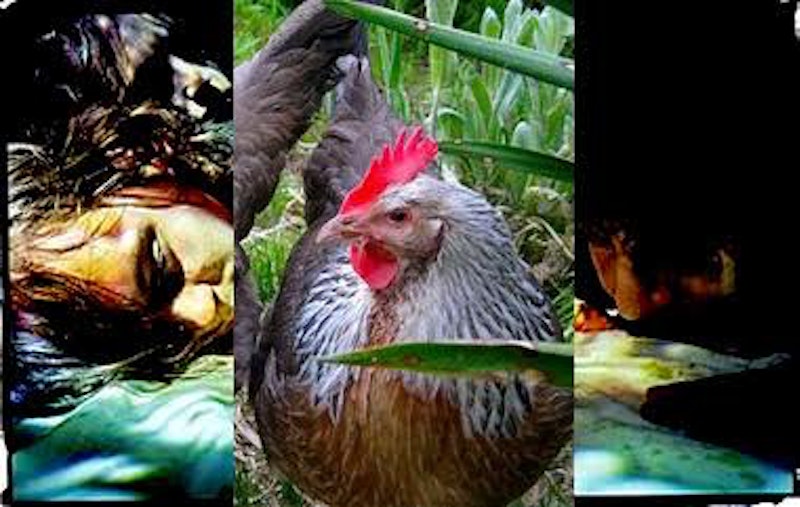 “A peacebone got foouuuuuuund in the chicken-fried wing!” I spur-clawed Avey Tare as soon as he sang that line at an Animal Collective practice in early 2006. I was adamant: “No. It’s offensive. Change the line.” So the dinosaurs got chewed out in the end. I never wanted to be around them when they were eating teriyaki, and believe me, when Avey lived in Chinatown, it was traumatizing just walking the streets to his apartment, seeing the kill hung up in shop windows everywhere. “Weave through the cardboard, smell that trash.” I always felt like an outlaw walking around Chinatown, knowing at any moment I could be mistaken for a prisoner and promptly plopped down on the counter, hacked and de-feathered. I pitied those poor chickens—they were unlucky, uneducated, never given a chance to be something other than a human’s food. You’d be surprised though, usually a hat and bug-eyed sunglasses would do. I blended in with the roaches and rats.

Back when Avey and Panda Bear lived in Brooklyn, we’d smoke hash and work on songs. I helped them with lyrics, mostly—Van Dyke Parks to their Brian Wilson. Not to belabor any Beach Boys comparisons to the Animal Collective: I always thought that was totally daft, picking out one element (close harmony) from their alchemical creations and pointing a bread crumb trail that wasn’t there to begin with. Nobody knows this by the way; none of this is on record. I actually named the band, just like Van Dyke Parks christened Buffalo Springfield after going out for a smoke and seeing a truck with those very words on its side. At the time, the boys were changing names from project to project: Avey Tare and Panda Bear; Avey Tare, Panda Bear, and Geologist; Avey Tare, Panda Bear, Deakin. When the four of them got together for Here Comes the Indian, their label insisted that they come up with a catch-all to avoid confusing distributors and customers.

I remember that night—I visited them at their cramped practice space toward the end of the recording of Here Comes the Indian, and they were all in a bad way. Panda was reading Tom Wolfe in the corner while everyone else just sort of sulked. Very stoned. But I was there to sell them hash anyway and of course ended up staying about six hours, and the only bit I remember—probably because I made a lot of money on this moment, let me tell you (and no, this is not covered by my NDA)—everyone was looking at their shoes, but I was looking at the stars. I was going to turn this schizophrenic avant-garde noise band into the defining band of the aughts. The mushrooms I ate on the way over kicked in and I saw everyone as the animals they were in their past lives—alligator, owl, frog, panda—and I spread my wings, called at the top of my lungs, and looked down upon them, momentarily suspended in history. “The Animal Collective”—it was the best I could come up with.

And that’s why I have a 50 percent royalty rate. You walk, squawk, live, and learn.