It Starts With an F

Checking in with an overworked word. 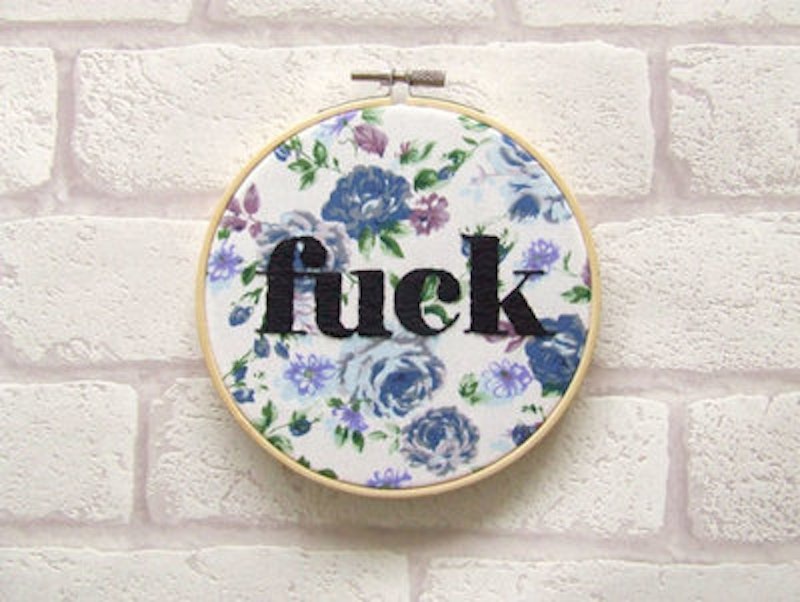 Will fucking go away? No. Fucking will bleed out more and more of its cursedness, its shock value as an obscenity, but it’ll still hang around. Social media’s a lot of yapping, but the yappers want to have style. Or many of them do, enough to keep fucking in steady work. This word that’s like a yelp somehow converts human barking into a semblance of crafted sound. Fucking’s beautifully plush design, the easy slide from f into the comfortable thump of uh against k, creates an ideal resting point for the throat, a chance to rest for what lies ahead. Twisty sentences can be kept going that way. Blunt little exclamations can be cured of their touch of sag (“I can’t fucking wait to tour”). And because a taboo, or the memory of a taboo, is being broken, this thump becomes an internal exclamation point. The speaker’s either being very serious or is definitely joking, or both, and they’re letting us know via the approved means of doing so.

The Fucking News doesn’t actually use [http://thefingnews.com] “fucking” that much. Gets the job done with the title and moves on. Apparently readers appreciate the spirit of “fucking” up there at the top of the screen. They don’t need to find the item itself scattered through the copy. At Jezebel “fucking” still does its old duty. “Andrew Cuomo Is a Fucking Snake,” proclaims a headline. “Here’s a fucking story about not fucking that I fucking love,” announces a lead. The site’s Facebook page treats the word as a dab of horseradish to be squirted on canapés. “Here's how many calories sex burns, you fucking maniacs,” says the headline above some health and sexuality stats. Above some numbers about golf’s declining revenues: “Fuck off and die, Golf.” Meanwhile, “S'mores can go fuck themselves.” (Yet Deadspin takes the prize for desperate over-emphasis about a dull matter: “Don’t Update Your Fucking iPhone!”)

Jezebel starts making prose: “Garnering just over 1.2 million votes, Jill Stein is arguably slightly less responsible for giving us Donald Trump than say, fucking Gary Johnson, but not by much!” Here we see the word doing what it does so often in the 21st century: holding together a sentence that ought to fall apart. Read the sentence without “say” and there’s a hole in the rhythm. Take out “fucking” and there’s a cavern. The spavined word-structure should have been knocked flat and its parts rearranged. I mean, “arguably slightly”? That’s a wall caving in. “Garnering” is like a row of windows with the glass knocked out. But glop in fucking and the malformed lump now has the rumpty-dumpt, up-and-down rhythm that the Internet considers the sign of a sentence that cooks. At the end there’s an exclamation point. By the time she was done, the writer figured the sentence was a high-spirited free-for-all or it was nothing. If you throw in “than say, fucking Gary Johnson,” you’re either madcap or desperate, and she didn’t want to be desperate. Of course, people don’t get to decide these things.

On Twitter, fucking works overtime. “I can’t fucking wait to tour,” says Travis Scott, a hip-hop performer. It’s a take-it-or-leave-it statement, he isn’t trying to be clever. But consider: “Can we just give @SpeakerRyan his fucking tax cut so we can start impeachment hearings please.” The person behind that was trying to be clever. In fact, he was clever: decent point, decent joke. But he wanted to punch the phrasing home.

“Fuck you, you fucking garbage piece of shit,” offers a man who bills himself as “Chief bandit of the coming apocalyptic wastelands. Also, comedy writer.” (The piece of shit was Trump, for congratulating the Patriots.) “Leffen fucking sucks,” tweets a fellow with a soigné coif and a fancy profile shot. (Leffen’s a gamer with one name.) “Working night shift tonight fucking raging,” says Santa Clause, a joke account that wants to be the bad-ass Santa. With these three we see fucking function as a buoy; it marks the multitude of folks on Twitter who figure they’re distinct, flamboyant individuals.

No one’s going to stop talking, and they aren’t going to get much better at it. Nor will they give up the idea that they’re uttering their thoughts in style. We’re stuck with fucking. Heavens.