I got a line on garbage collection. 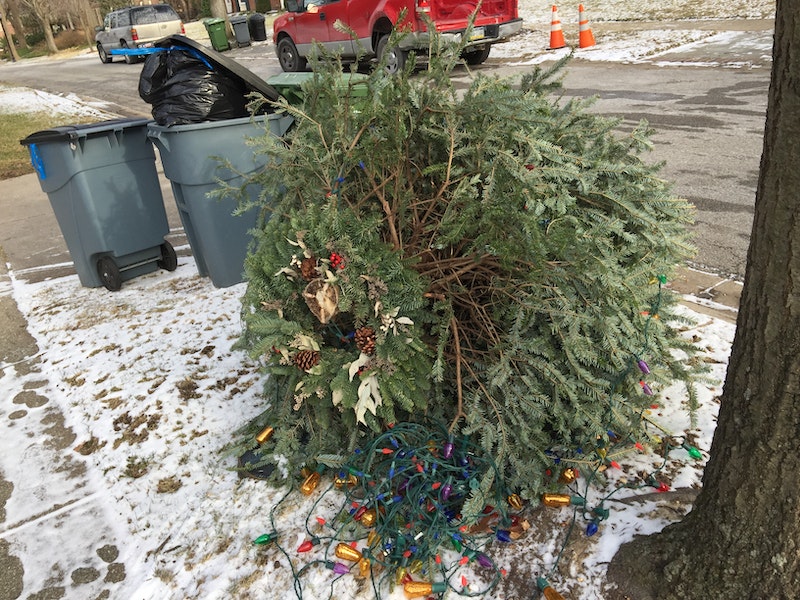 I was just three when the Coasters’ timeless “Yakety Yak” was a number one hit in 1958, but the song—the 45 played in my household repeatedly as a kid—still ricochets around my brain when it’s time to roll out the garbage cans to the curb every Monday night (The above picture is from a couple of days ago). Those kick-off lyrics—“Take out the papers and the trash/Or you don’t get no spendin’ cash”—are infectious and on occasion I’ll murmur the lyrics, like I was in the shower or something. The trash chore was another hand-me-down—like winter jackets or t-shirts—from one brother to another until it landed on me in the mid-1960s. Back then, just as milkmen still delivered their product in quart glass bottles at the crack of dawn, sometimes freezing in the winter, trashcans were made of hard metal and of course had no wheels. Depending upon the week, it could be a heavy lift, and, lacking caution, you could scrape your knuckles bloody since the cans, knocked over by cars, sometimes chucked indiscriminately by the town’s crew, were reduced to a shiv-stylist’s bonanza. And forget the lids: they were flattened just a couple of weeks after being purchased.

I don’t know if the fellows—I’ve never seen a lady on the job—who ride around the streets dumping trash into their trucks are still called “sanitation engineers,” as I believe was the parlance 20 years ago, but it’s not an occupation I ever aspired to. When I was very young, I thought it’d be great to grow up and work as a mailman—my variation on the common pre-teen plans to be a solider, fireman, or cop—since I liked John, our USPS representative, was nosy, and loved opening the packages that often arrived at our home from my mother’s prodigious skill at winning contests. A jingle here, a 25-word essay there, and cameras, appliances, and baseball tickets arrived at 123 LaRue Dr. One summer during college break, my brother Gary worked as a garbageman, and often reeked upon arriving home at five o’clock or so. The money was pretty good, as I recall, but he worked like a dog, and though he sometimes liked riding on the side of the truck, and snagged a couple of curious discarded items in affluent neighborhoods, it wasn’t his favorite job. My oldest brother was a Good Humor man—similarly, a summer job—and I thought that was really cool, but he rolled his eyes when I enthused about how much fun he must have.

Once I went to college myself, trash duties at various apartments in Baltimore are a blur: I’d guess roommates and I would take turns, but it wasn’t even a minute-long chore since there were no driveways. In New York during the '90s at our condo it was also easy since garbage chutes were on every floor. There were the nettlesome recycling laws to contend with, which I wasn’t especially diligent about, although gathering the week’s mountain of newsprint, and tying it up with twine was something I did comply with. But beer or juice bottles? Down the chute. The sole benefit I can think of that came from the city’s 9/11 wreckage was the de facto suspension of recycling regulations, since like other smalltime ordinances, the government had bigger fish to fry.

Here in Baltimore, it’s a different story—not the recycling, since I ignore that—as our three, sometimes four, garbage cans, plastic with wheels, must be set out for once-weekly collection every Tuesday. (Twice-a-week visits were abandoned seven or eight years ago.) And you can’t fool around: the truck chugs around our neighborhood streets at a very early hour—sometimes at the same time newspapers are delivered to the couple of us on the block that still subscribe—and if you forget to lay the cans out, you’re left, in the summer at least, with a stink that isn’t at all pleasant. It’s still a head-scratcher to me, but for some reason when our boys were old enough to inherit the chore, they had to be reminded at least five times, and finally they’d get around to it, with no shortage of complaints. It’s not as though they shirked other household responsibilities, but the garbage cans apparently represented some bad dream that they never had. That’s my explanation, at least, although if I tossed that out today they’d both say I was all wet.

So, more often than not, I’m the one who gets wet, when it’s raining, or worse yet, tuckered out if there’s been a snowstorm, since dragging the damn containers through a partially-shoveled driveway just plain sucks. Funny, until this very moment, I never even thought about Spirit’s 1968 now-neglected mini-masterpiece “Fresh Garbage” when taking out the trash. Another theme song as I putter along.