My Dream About the Path of Gold

Where will it take me? 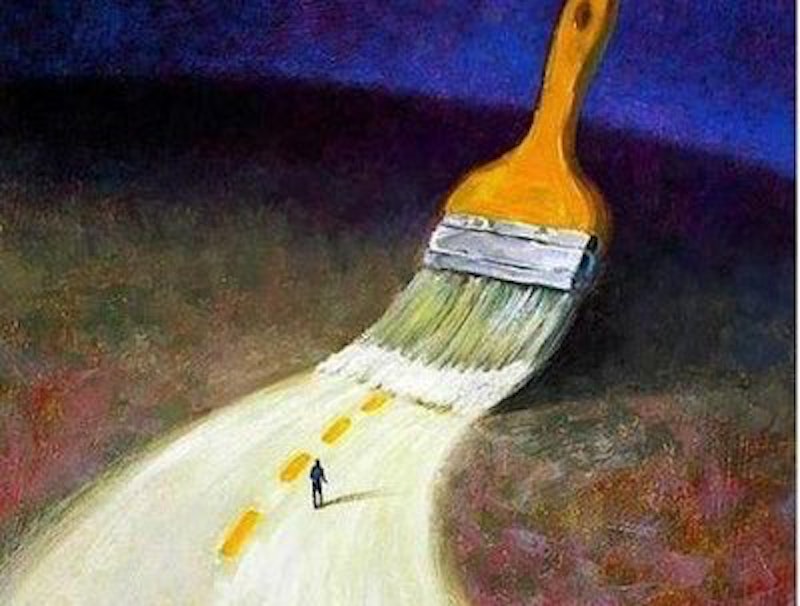 The dream concerns a cop named Stuka and a pulse-like, resounding beat in the head, a beat that resolves itself into the words “path of gold.” But the dream begins with me affronting fellow students in a yoga class. The class’ site is a jumbled white mansion where every room is too small, and the affronting represents the first move in a campaign that I’ve prepared for a while. The point of the campaign? That isn’t clear, though it presses on me. Perhaps I just want to show everyone who I am. If so, I appear to have a problem with Muslims: the campaign’s next phase finds me in my underpants, prancing and yowling before some middle-aged ladies in hijabs. This is in a backroom of the mansion. My prancing and yowling are pretty much what I did to the yoga students, except possibly more so.

The ladies in the hijabs certainly do seem taken aback. But now, typically, my nerve fails me. Having laid myself out there, I want to escape punishment. The cops are on my trail and I go to ground. Perhaps not successfully, for the scene shifts to a police station. This station makes up a few stories of a bright, sun-lit pile that appears to be a tower but also a business district. In the course of the dream, I’ll visit other stories in the pile. One is a closed-in, booth-like antechamber to a fashion designer’s atelier. Another is an expanse open to the sun and lonely in mid-day, perhaps suited to being a parking lot. The expanse has an uneven rise and fall, a sense that this locale has been hand-formed by somebody not too adroit. The antechamber has that sense too, as if the walls had been stapled in place.

The police station is another example, but the place isn’t just ramshackle. It’s also big and bustling. It extends out horizontally for quite a ways, and every inch is packed with chins, elbows, stomachs—people, I mean to say, but people who are glimpsed rather than viewed fully. This is the way with many of my dreams: arrive at a workplace and it’s wide and crowded, with lots of sun. The police station varies the theme by being a rough-hewn sort of environment. Metal shelfing dominates, shelfing that divides the space into aisles. The effect is like that of the stacks of a college library, though only if busy men with potbellies hurried through the sunlight.

Presumably I’ve been brought to justice. But not quite. The dream finds high gear as word sweeps the station: Stuka, that rogue-hero, that marauder, has stepped on the premises. The baddest-ass, most swashbuckling of cops is looking for a victim, some “volunteer” plucked from the force to help the renegade pursue justice in his own breakneck way. Possibly the assignment also involves being ridiculed in front of the station’s pot-bellied crowd. At any rate, the men know the drill and they’ll have none of it. As one, like a tide of shirt-sleeved civil servants, they retreat beneath the metal trestles that crowd the length of the stationhouse. These trestles have wheels and drawers and possibly are used for evidence storage.

I retreat with the crowd, marveling at my luck as I’m lost among their panting flanks.

Meanwhile, Stuka paces the station. He’s a mordant fellow and amused by his colleagues’ mass disappearance. Perhaps he whistles a tune as he strolls. His nose is a snub, his hair a nest of iron-gray curls. His pot belly? A hard dome like a shield, not a helping of belt-line sag. I see his boots go by as I breathe with my erstwhile captors. We’re all hunted now, all ready to flee. My course is simply to find an exit and avail myself of it. There’s one someplace and no shame in looking. But where… where?

Now I pelt from floor to floor. I find the designer’s antechamber, pause, and rocket on my way. The mid-air parking lot opens before me. I’m low to the ground at this point. The expanse’s black tar paper is inches from my nose; the afternoon heat settles on my neck. I reflect on movie soundtracks and what they tell us. There’s one now, a humming mill of synths and piled-up choruses. “Path of gold,” it announces. Yes, that’s what I’m looking for. “Path of gold,” the chorus repeats, and now it’s crowded into my ears. “Path of gold,” the soundtrack says, and each syllable turns my head into a mere skin containing the noise.

I wake up and there’s too much sun. “Path of gold?” I say. Whatever I was running from, I’m back where I started.