This can’t be the modern world. 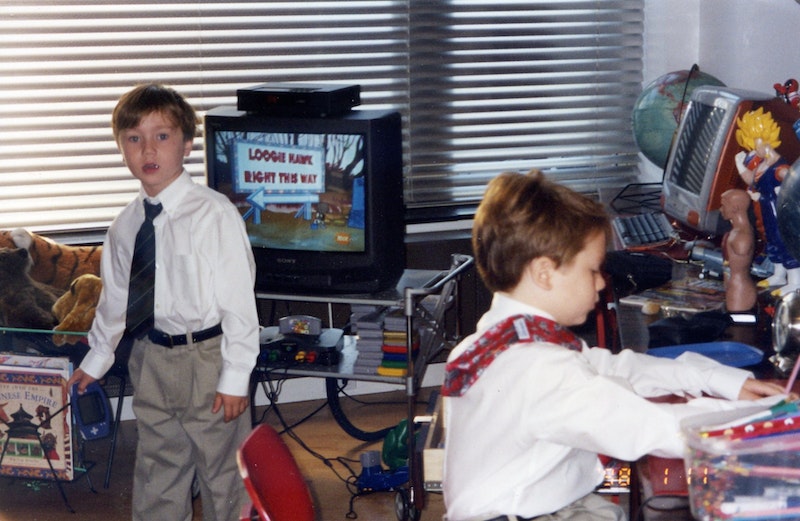 Let’s dispense with the immodesty right off the bat. I think the above photo—my sons Booker and Nicky in their room at our loft at Hudson and Duane Sts. in Tribeca—is really nifty. I had a vague idea of when it was shot (with an Olympus standard camera), figuring the late-1990s, but Nicky corrected me by identifying the Game Boy Advance his brother is holding, and that was released in the spring of 2001. The boys are up early on this early September morning, around seven a.m., already dressed for the ride up to The Browning School on the Upper East Side. But what’s striking to me, at least, is this jam-packed shot bears less and less resemblance to modern America. It could be in a time capsule. No DVD player, cell phones, an old orange Mac PC, and antique videogame cartridges.

Not shown is the bunkbed the boys shared—as I recall, Booker was on top, and, a squirmy sleeper, he took a few tumbles at first, so we had pillows on the floor—or their closet full of non-formal clothes, with jeans, shorts and rock ‘n’ roll t-shirts. Nicky’s catching up on a homework assignment that was behind schedule since we’d been in Nantucket the previous weekend for the wedding of their cousin Zoe, and Booker’s just frozen in time. I do wonder what Nickelodeon show is on in the background, and am not entirely sure why the blinds are closed. Nicky, in particular, loved the sound during the night of trucks rumbling up Hudson St., and when we moved to Baltimore in ’03, he had a tough time falling asleep, preferring NYC’s constant noise to the chirping of crickets and birds outside our house in Guilford.

It was a cool condo we lived in for several years, forsaking our previous residence up the street at the Powell Building for a renovated space that included outdoor space—a rooftop we shared with Richard and Laura Parsons. I can’t even imagine what it would sell for today in Manhattan’s hyper-inflated real estate market, and that too, is an example that we’re living in an entirely different era just 14 years later. (I won’t dwell on it, but this moment in time was captured within days of 9/11, the defining event so far of this century, and one that ended the 90s. Let’s just say it wasn’t as much fun to walk upstairs to the roof to play ball or barbeque once the Towers were demolished. The entire neighborhood smelled like a crematorium for months afterwards.)

My favorite object in the picture is the old globe at the top right, that somehow survived the two dozen moves I made from college to 2001, traveling from my own room in Huntington to New York City. The globe was bought in 1948, and showed—just a smattering—Rhodesia, the vast Soviet Union, Peking, Yugoslavia, and Thailand labeled as “Siam.” Makes you want to re-visit 1955’s Lady and the Tramp and sing, “We are Siamese if you please/We are Siamese if you don’t please.” Better sign off now, before I’m the object of a citizen arrest for writing the word “Peking.”