The history and search for the elusive sea marble. 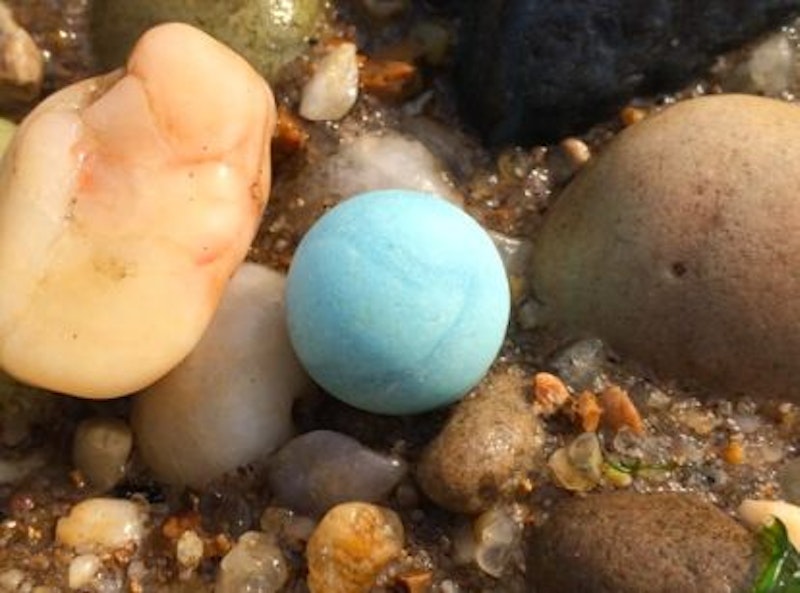 As I write, I’m on the Olympic Peninsula in Washington State at a beachcombing conference, which made me happy. Being around other people who share your passion makes you feel a little less lonely, especially when your hobby is quite isolated. There’s a great camaraderie among the people here; I was thankful to participate and find that the sense of community I wrote about in my initial article about this conference still thrives.

I learned so much from the other conference speakers about the geography of the Pacific Northwest, shipwrecks, fishing floats, agates, fossils, petrified wood and other rocks, sea glass and porcelain and so much more. I spoke this year on sea marbles. Here’s some of the information I shared during my presentation.

To understand how marbles end up on the beach, you have to know a little bit about marble history in general. Marbles date back to 3000 B.C. in Roman, Greek and Egyptian history. Did you know David took out Goliath with a marble? The earliest North American marbles were found in ancient earthen mounds. Handmade (clay, agate, and other stone) marbles from Germany date to around 1850-1900. In the United States, by the late 1880s, clay marbles were produced in the U.S. and glass marble manufacturing began in America in the 1890s in Ohio. M.F. Christensen patented the first marble-making machine, but Akro Agate was the biggest; their slogan was “Shoot straight as A Kro flies.” Marble tournaments began in the U.S. in 1922 in Wildwood, New Jersey (for boys; girls weren’t allowed to compete until 1948) and were a huge competitive hobby. The Great Lakes and New Jersey beaches are still popular places to find sea marbles in the U.S. today in addition to the Chesapeake Bay, California coast, and beaches near resorts or shipping port towns. 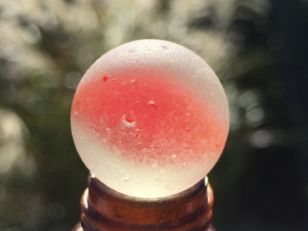 The marble in the above photo is the very first piece of sea glass I ever found. When we moved to Maryland’s Eastern Shore about 15 years ago, I looked online and found a nearby beach park and took my kids there. It turned out the spot used to be an old amusement pier a century ago. I was walking along the shoreline, and I looked down and saw a perfectly frosted orange cat-eye marble. I picked it up, turning it over in my hand, not really knowing at the time that it was sea glass, or even knowing what sea glass was. I kept it, noticing there were other pieces of frosty-looking glass on the beach. We never had marbles as kids, and I thought it was pretty. One day in a local shop I stumbled across a book about sea glass (Richard Lamotte's Pure Sea Glass) and picked it up, noticing the chapter about sea marbles. I was hooked, and have been an avid beachcomber ever since.

It turns out in the big scheme of beachcombing, finding sea marbles is actually very rare. Securing one of them as my first piece was a blessing and a curse. It set an impossibly high standard. Who wants to find lame pieces of old brown Budweiser bottles when your first piece was a gorgeous, perfect marble? So I kayak around the Chesapeake Bay in search of hidden beaches and additional perfect marbles. I have well over 150 marbles now, many not as perfect as that first one, some equally as cool.

Because many people ask how I find sea marbles, in the slide show this past weekend I explained that although it sounds a little odd, you really have to think like a marble. You have to go where the marbles are. They're a toy. They hide. They roll. Mary Beth Beuke’s book The Ultimate Guide To Sea Glass suggests they were used as ballast on ships, so you should look near ports or shipping channels, and that they were used as slingshot ammo by children into the ocean, so you need to look on beaches where lots of children played. Beaches near where trash dumps were located are ideal for finding marbles. Railroad marbles are another phenomenon regionally—the B&O railroad ordered marbles by the ton to be used for rolling heavy crates around the railroad beds; these often ended up in nearby waterways. Marbles don’t wash up on sand, they roll around in rocky areas (see main photo). They’ll often be found just below the tide line and therefore can more often be found in a negative low tide.

Marbles are toys, and are fun to find. When they’re really old and not placed there under false pretense, that is. Unfortunately, the desirability of finding sea marbles has spawned an entire commercial industry of fake marbles. I don’t mind the commercially produced “eco” or “green” marbles that people create and sell and admit are fake as “craft” marbles. They’re calling them what they are. But there are people on eBay and on Facebook who are selling fake marbles as “sea marbles” that are tumbled, caged and seeded marbles and it’s a shame. Tumbled marbles are new marbles tumbled in rock tumblers. Caged marbles means someone puts marbles in crab-trap-looking cages, puts them in the ocean to get “wave action” then brings them back out for sale, and seeded marbles means someone throws new marbles into the ocean for them to “get worn” and then return. The concept of people throwing broken glass into the ocean to “become sea glass” (thus taking away the history and context of the piece) drives me a little nuts—I’ve ranted on it before.

(Marble Mania by Stanley Block, Schiffer Publishing, 2011 is a great resource for more info and history on marbles).