A vocation lost on Millennials, for good reasons. 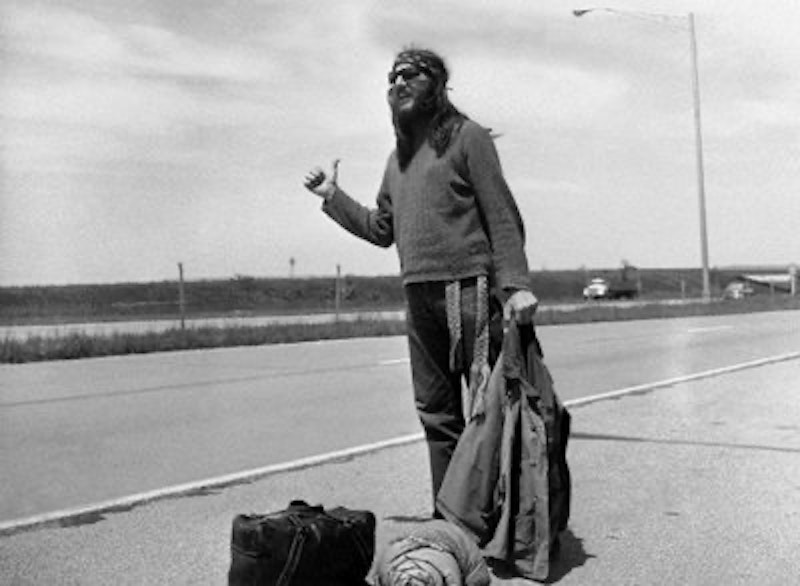 Reading today, at least online, is a scattershot expenditure of time, and even if you avoid the obvious clickbait headlines sometimes one pops out. A couple of weeks ago, I tapped an article found on a social media site and it was a lulu. “Is Hitchhiking Unethical,” an impossibly self-righteous tutorial by a writer named Pamela MacNaughtan was on the screen, and, miraculously, I read it all. In the midst of discovering travel tips that I’ll never use, I used every bit of the noggin and couldn’t remember the last time I saw a hitchhiker. Definitely not past 1985, and that might be a stretch. In fact, over the summer my brother and sister-in-law were talking about our countless experiences hitching, and my two sons were, if not exactly incredulous—they’re used to anecdotes from the fabulous 60s—shaking their heads since they’ve never hitched, nor have their friends.

First, take the castor oil, for helpful Pamela’s how-to is, if not really insulting, full of holes. She starts with a bit of history, writing: “[I]n our current society cars are more common, and gas is generally easy to find, [so] hitchhiking out of necessity is no longer a common practice in North America.” That’s not a lot of help to people, mostly young, who don’t have cars and don’t even consider that gas is plentiful—it was in the 1960s as well. In truth, the main reason you don’t see hitchhikers today, whether on the highways or local roads, is because it’s too frightening. It’s incomprehensible that an 18-year-old girl would stick her thumb out seeking a ride, not after all the Ted Bundy-like horror stories that’ve inundated the media for decades. If, for example, one of my kids said he was going to hitch down to Florida, I’d spend as much time as needed to dissuade him. It’s not safe.

A bit more of Miss Pamela: the world-traveler chastises youths who hitch in other countries rather than take busses, because they’re denying the locals a splinter of largesse. “If you’re strapped for cash,” she writes, “you can still make a positive impact with the locals who offer you a ride. Carry small bottles of vodka when in Russia, Central Asia, and Mongolia. Have a couple packs of cigarettes in Eastern Europe. Buy food and drinks for the driver along the way in Asia or Africa. There are many ways we can give back, all it requires is for you to think about the people helping you out, and finding a way to help them in return.”

Even in the 70s, I never hitched abroad, too many unknowns, but the above lesson is just stupid. If a traveler is “strapped for cash,” it’s not likely he or she can carry booze, cigarettes or has the wherewithal to buy dinner and drinks for their drivers. Hitching isn’t a party: it’s a way to get somewhere.

Back in the USA, a long time ago, my four brothers and I took to heart the lyrics to Marvin Gaye’s Top 40 hit from 1963: “Got no money in my pocket so I’m gonna have to hitch hike all the way.” I wasn’t older than 12 when I started hitching in Huntington, New York: sometimes just downtown, but longer excursions as well, like when my friends Elena and Howie would thumb rides to beaches like Brown’s, Crescent, Fleets Cove or Crab Meadow. It was second-nature: didn’t have our driver’s licenses yet, bikes might’ve been on the fritz, and I don’t recall a single time that I was afraid. Later on, in college, I hitched from Baltimore to New Hampshire and back, New York to Boston, usually visiting buddies at New England schools. Fear wasn’t a factor: rather, standing on a highway—worse in the rain—for several hours waiting for a ride just sucked, especially on a solo trip. Goes without saying that it was much easier to get a quick ride if you were with a chick—parlance of the day—but even then, it was hit or miss. There were a few times when it all became a little too hairy—like when a psycho picked me up and drove 100 m.p.h. just to (successfully) rattle me, and then dropped me off smack in the middle of Harlem—but mostly the rides were without incident, and often there was a joint or bottle of bourbon that was shared, and a lot of terrific conversation with someone you’d never see again. On a long ride, you’d give the driver a couple of bucks for gas, but it wasn’t really expected.

I stopped hitching in the mid-70s after two consecutive creepy rides. The first was when I was hitching to school in Baltimore from the house I shared about five miles from campus, and a middle-aged guy suggested we take a detour to his place to watch some dirty movies. “Got a class, man,” I replied, and while he took no for an answer I did wipe my brow upon arriving at the Johns Hopkins library. Just a week later—the odds of this happening flipped me out—I snagged a ride back to the house on Belvedere Ave. and the driver, another sad-sack guy around 40 began making queries about “all those girls at Hopkins ready to ball,” and then moved his hand to my leg, and as it traveled upwards, I told him to stop the car, because—surprise!—my destination was on the right side of the road. He persisted a bit, but I got out of the car in a hurry, and began to reconsider the wisdom of hitching. I did make a few more long trips via the thumb, but the party was over. To me, at least, hitching now held the possibility of a very, very bad outcome, and I switched to city busses, trains or Greyhound.