Examining my cluttered desk from 1971. 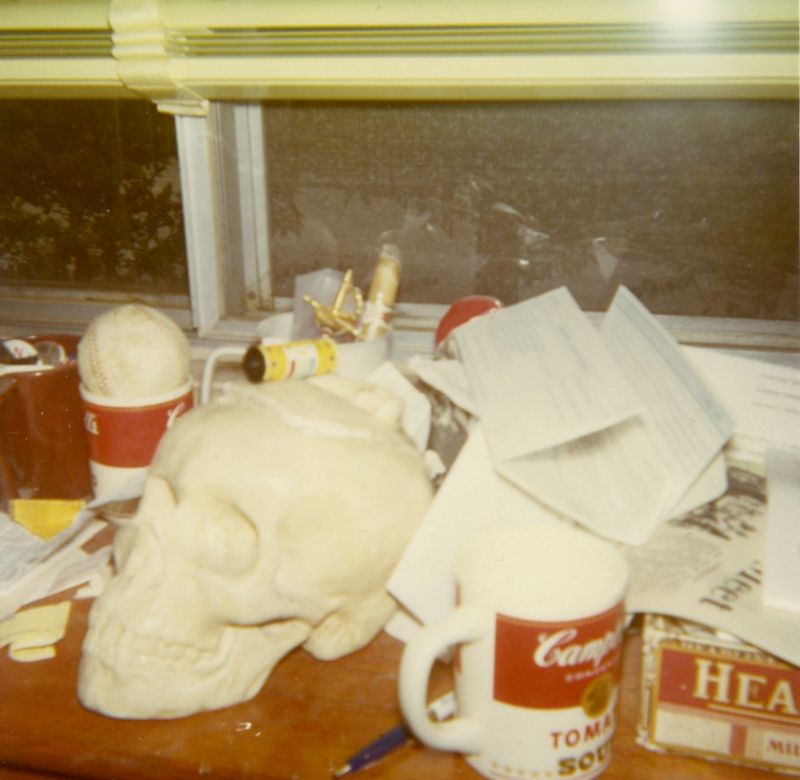 There are run-of-the-mill hand-me-downs—flannel shirts, worn winter coats (as the youngest of five, they were fairly tattered), sneakers, clip-on bowties—and then there’s the gold. The centerpiece in this 1971 photo of my roll-top desk—a gem in its own right, and I’ve no idea whether it’s a legit antique or a knock-off that caught my parents’ eyes at a rummage sale, but even though the rolling feature was busted, there were about 20 nooks and crannies, perfect for hiding nickel bags and other contraband—is obviously the skull. Fake, of course, probably a prize won at Coney Island in 1954, or the local Fireman’s Fair in Huntington, but as a 16-year-old I thought it was really, really cool, as did pals who hung out in my bedroom. I used the skull to stash my dosh—earned by shoveling snow, mowing lawns, babysitting, and feeding the neighbor’s cat—and nothing else. I’m sure I inherited it when my fourth-oldest brother Gary went off to the University of New Hampshire in 1968, so I had it for a number of years. Unlike most of my stuff, the skull traveled with me to college in Baltimore in 1973, and I can’t remember when it was shattered during one of my 15 or so moves during the 70s, so I’m glad I still have this pic.

Behind the skull is a stale cigar that my oldest brother gave me after my first niece’s birth in 1967—I was 11, thrilled, and for about three weeks after Traie’s arrival, when I got off at my LaRue Dr. bus stop from junior high, a bunch of friends would mock-sing, “Goodbye, Uncle Rusty”—and it’s possible that the stogie remains stored in a box down in our basement. I’ve never been much for cigars, and can’t imagine what it would taste like all these decades later. At the right, there’s a cigar box and who can tell what brand, with just the first three letters showing, that overflowed with God knows what. There’s a small detail of what I surmise is an issue of The Crux, an underground newspaper I contributed to in high school, a mimeographed number that came out, no surprise, whenever we got around to it. Why I kept those ugly Campbell Soup mugs is a mystery, since I disliked the soup—save the chicken noodle—but not everything passes the muster of time. At least I kept a baseball—from Little League, certainly not a foul ball I caught at a big-league ballpark, since that’s never happened, and yes, I’m bitter about that fact—to top one of them off.

I see a roll of undeveloped film, undoubtedly from the cheapo camera that was used for this very photo, and near the window, under the exceedingly ugly (and always dirty) pale yellow Venetian blinds, is a gray beer stein, with a glass bottom, that Gary gave me after his trip to Germany in ’67, one of several souvenirs he brought home that summer. Today, when I think back to it, even more important was the music news he returned with: the formation of Traffic, co-fronted by Steve Winwood, whose impossibly soulful teenage voice with the Spencer Davis Group, was chilling. Way before the term “blue-eyed soul” was used to describe lesser vocalists, like Robert Palmer or Daryl Hall.

And, thinking of souvenirs, next to the cigar poking out of a container, is a tiny sword from Spain that my parents brought back for me after a two-week trip they took to Europe in ’65 or so. It could’ve been an airport number, but I doubt it, since that wasn’t my mom’s style, but I liked it a lot. My parents weren’t world-travelers, but they did get around, since my mother’s vocation at the time was writing jingles, slogans, and short essays for contests that big companies sponsored—sweepstakes robbed that lucrative profession from mom in the late-60s, but she had a serious run. Several tours of Europe, a trip to Mexico, and a number of forays to the Caribbean, as well as a 1960 fire-engine red Valiant, and over 1,000 other prizes of varying value, many of which would end up under the Christmas tree each year. Dec. 25th was very kind to the Smith boys.

I might not recall the exact year of that European trip—my dad was very annoyed that in Germany people assumed he was a native, pronouncing his last name “Schmidt”—but man alive, did my brothers and I have a ball while they were away. I think it was Jeff who was in charge of the cash allotted for sustenance in their absence, and he didn’t scrimp: instead of Swanson TV dinners, franks and beans, pot roast, and frozen salmon croquettes, we had pies from Village Pizza every other night, deli sandwiches, sixers of Coke or Pepsi instead of generic cola, Dad’s Root Beer, Wise potato chips—when they were tops, slightly burnt and salty—Hershey bars, Schlitz beer for the older boys, Carvel cones, and bags of burgers from the local McDonald’s. My parents returned, jet-lagged, and didn’t ask a single question about how the money was spent. Just like heaven.