My family’s votes from the great beyond. 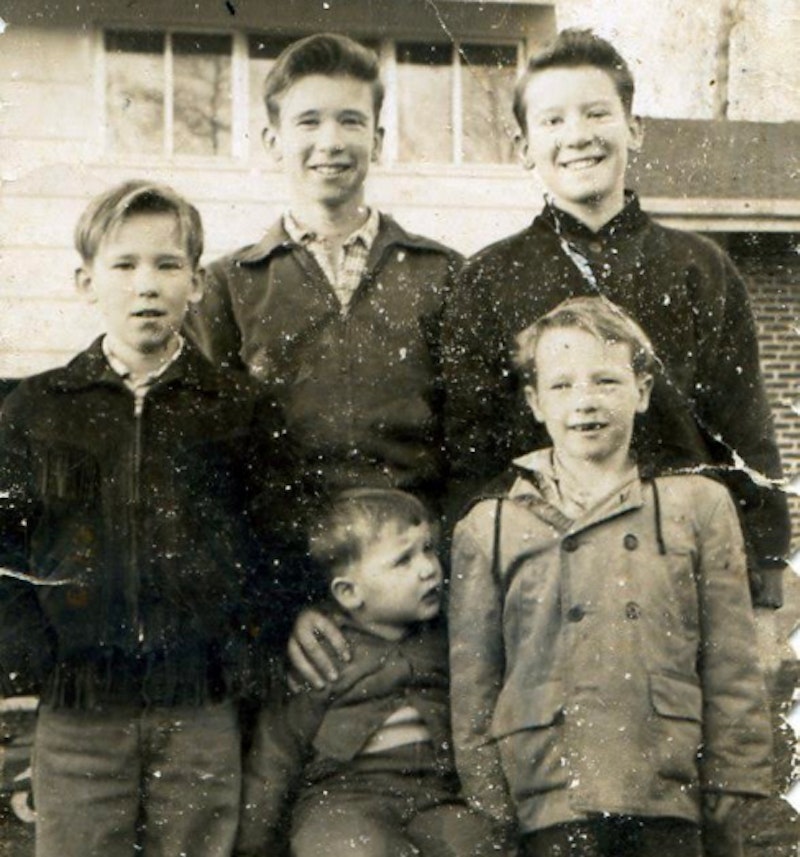 At dusk one November evening on Necker Island in 1999—my oldest brother had rented Richard Branson’s dot of Caribbean paradise for a family reunion—my ailing brother Doug, nursing a glass of tequila, buttonholed me on a veranda to deliver a stern soliloquy on the evils of George W. Bush. He’d been reading my New York Press MUGGER columns, knew I was in favor of Bush for the 2000 election, and said the man was a “monster.” As it happened, Doug died less than two weeks later—victim of a very fast-moving cancer at the age of 52—so he never got the chance to rub the bungled Iraq War in my face a few years later. I sure miss Doug, the middle of my parents’ five boys (pictured above in Huntington around 1958), and his uncanny knack for beating the zeitgeist curve by a couple of years, but not his left-wing political harangues. He was always the most liberal of the Smith Brothers, a point of view that only accelerated when he moved to California around 1980, to take a professorship at Cal Poly.

I’ve written before that politics in my family was a sort of sport—bare knuckle boxing in Doug’s case—and as this election approaches I naturally think of how my various departed relatives would react to the sordid Clinton/Trump down-in-a-Mumbai-gutter match-up. Doug would’ve been an active and vocal Bernie supporter—free tuition, pecuniary taxes, the whole shebang—and I’d guess he’d hold his nose and vote for Hillary all the while grousing about her corruption and embodiment of the status quo. Though he would’ve dug that America would finally have a female president.

Now, my brother Jeff, who passed away in 2012, was entirely different. Jeff loved politics, with all the theater and histrionics, and though it’s been four years since his death, I still find myself, at least once a week, reaching for my cell to gab about this or that development, and then, with exasperated melancholy, remembering it’s not possible. Jeff was by temperament conservative, at least on economic issues, but he often went off the reservation. In 1992, for example, he pulled the lever for Bill Clinton, angered by George H.W. Bush’s backtrack on his “read my lips, no new taxes” promise, and then, once he’d seen the oleaginous Bill and Hillary at work, regretted that vote and went with Dole in ’96, Bush in ’00 and ’04, but, disgusted by Sarah Palin and John McCain’s seat-of-the-pants reaction to the ’08 crash, voted for Obama. This year there’s no way he’d vote for Trump—his disgust for the man, like mine, went way back—so he might’ve gone the third party route.

My last conversation with him about politics was in Lucerne, Switzerland in September of 2011, and although very ill, he was enthused about Mitt Romney. I’ll never forget one time when he and I were at JFK in 2006, waiting for a flight to New Delhi, and, sweeping his hand around the chaotic mass of people, said, without rancor but resignation, “Isn’t this great, pal, these are the people who decide American elections.” Jeff was a cynic, like the rest of us, but I’ve never known a man with a bigger heart; a loyal brother, husband, and father who radiated exuberance and generosity. Like me, he was a year-in-year-out baseball fan—tied to the Yankees since the early '50s—and I wish I could yak with him about the current World Series. There’s no doubt he’d be pulling for the Cubs—I’m rooting for the Tribe—not only because he’d been to Wrigley Field on many occasions, but c’mon, no championship since 1908? Easy choice. (Obviously, as a Yanks partisan, he didn’t feel the same way in 2004 about the Red Sox winning for the first time since 1918.)

My parents, born in 1916 and 1917, like most people of their generation, voted in every single election, considering it civic duty. Dad never supported a Democrat: on Election Day he’d come home and I’d ask how he voted, and he replied, with a small grin, “Row A all the way.” His last election was 1968 and he went with Nixon, as did my mom. But, though it’s in the fantasy realm—he’d have been 100 in November—I can’t see him backing Trump; in his quiet, non-judgmental way, he’d find the man uncouth, as would my Uncles Joe and Pete, who both broke orthodoxy and voted for Perot in ’92. Mom, though she voted against FDR four times, was quirkier. In 1948, her ballot went to socialist Norman Thomas, which is still a head-scratcher; Harry Truman was anathema, and for whatever reason, Thomas Dewey rubbed her the wrong way. She then went straight GOP until 1972, just months after Dad died, and surprised us all by voting for McGovern. Her last presidential election was 1980, and she went back to the Republicans and Ronald Reagan. And this year? Definitely not Trump, too unseemly, a man who’d have reminded her of the Kennedy clan, a family she despised. Dollars to doughnuts, as everyone once said, she’d be in Gary Johnson’s corner.