A Victory For Transgender Students Everywhere 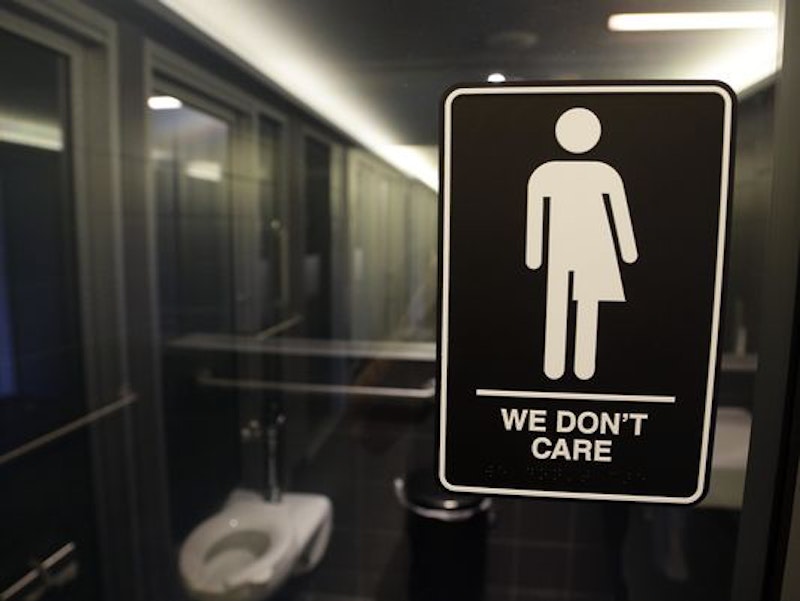 Given that I’m always yelling about bad things that have happened for trans people in the world (and America in particular), it’d be remiss if I didn’t talk about something pleasant that occurred this week. It’s not every day that trans kids’ rights make progress, but I have to give kudos to Township High School District 211 and U.S. Magistrate Judge Jeffrey Gilbert for being not-lousy government cis folks.

Back in May, parents in Palatine, IL were infuriated by the district’s decision to allow a transfeminine student to use the girls’ facilities (locker rooms and bathrooms). Acting with the support of the notoriously anti-trans Alliance Defending Freedom, the parents filed suit against the Department of Education on the grounds that cis girls’ privacy was being violated by the trans girl’s presence, solely because their genitals didn’t match.

This is a core component of the ADF’s stance on trans kids. Writing for their official blog, Matt Sharp (one of the ADF’s legal counsel who serves on the bafflingly-named “Freedom of Conscience Team”) states, “forcing students to use the restroom with members of the opposite sex harms all students by violating their right to privacy and making them participate in situations that most adults would object to if they were imposed upon them.” We’ll get into the first part of that statement in a moment, but it’s important to note that according to the Pew Research Council, about 51 percent of Americans favor allowing trans people into facilities that match their gender identity; more importantly, that number is 67 percent among people between the ages of 18-29, indicating that high school-aged youth might not object to these “situations” at all. In this case, it seems as though none of the cis girls directly affected by the trans girl’s presence mind that much, given the district’s attorney Sally Scott noted no students have chosen to use the private changing rooms available to all girls.

But so intense was the wrath of “Students and Parents for Privacy” that a simple lawsuit wasn’t enough; in August, they filed for an injunction that would’ve forced the trans girl (who, in a victory for privacy, remains anonymous) to use boys’ facilities or be tucked away into a unisex bathroom until the case was settled. I’ve written before about how harmful this sort of mandate can be; thankfully, though U.S. District Judge Jorge Alonso (who is hearing the case) didn’t dismiss the injunction, he didn’t grant it either, holding off instead until he had received a recommendation from Judge Gilbert.

Earlier this week, Gilbert made headlines when his recommendation came out strongly against that injunction. Gilbert wrote that District 211 had “balanced the interests of all its students" and that not only had the ADF and its clients failed to show they had a likelihood of winning the case, but that students "do not have a constitutional right not to share restrooms or locker rooms with transgender students whose sex assigned at birth is different than theirs." This doesn’t set a precedent but it’s hard to imagine that Alonso will ignore Gilbert’s strongly-worded recommendation, making a victory for the district and the girl known only as Student A more conceivable.

But Gilbert’s more sweeping words were those that got me excited: his declaration that, assuming districts put in place adequate accommodations for students who are legitimately concerned about their privacy, sharing a bathroom with a trans student “does not create a severe, pervasive, or objectively offensive hostile environment.” That I’m thrilled at these words should tell you how low the bar is set in American transgender law. It’s nice to see a cis man in a position of power affirm, on the record, what we’ve been saying about ourselves all along: we’re just here to do our business, folks. Nothing to see here.

Of course, the ADF—whose suit is riddled with cruel misgenderings and attempts to make the court think that Student A is actually a deluded boy—fired back by saying the recommendation “threatens the dignity and privacy rights of students... by authorizing a male student to enter girls’ locker rooms.” They don’t plan to back down. But neither do trans activists, the ACLU, and the district itself, all of whom support Student A wholeheartedly and want to see her get the rights all other girls have. And by all accounts, it looks like we’re winning.