The Doomsday Clock stands at three minutes to midnight. 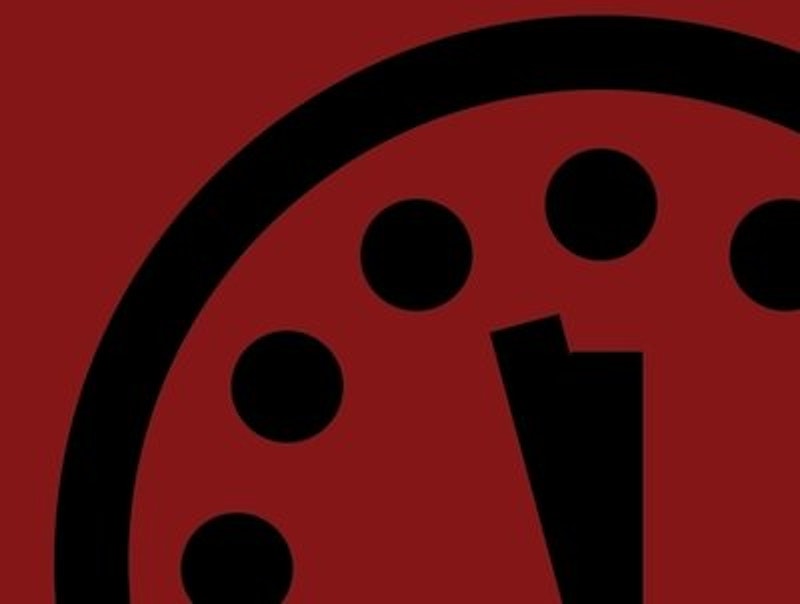 2016 has been fabulous, and it can only get better. While the quality of the candidates leaves a lot to be desired, I’ve got to say this presidential election cycle has been the most amazing political event I’ve seen since the collapse of the Soviet Union. The American political system has been exposed as a corrupt sham democracy, pay to play all the way. The oligarchs are pulling out all the stops to insure the continuance of their neo-feudal agenda. The cultural landscape is littered with failed circuses, comic book heroes and villains, killer cops, and scary clowns. Europe is falling apart. Our nuclear arsenal is definitely at Defcon 3, possibly Defcon 2: they would never tell us. The Doomsday Clock stands at three minutes to midnight, as close as it’s ever been. It’s really exciting.

I rarely go out anymore. I’m no longer capable of running and I’d prefer to avoid shooting anybody. I find people generally annoying. I don’t like bars. Most prison sentences begin in a bar. I stopped going to bars when the Body Nazis banned smoking in them. I’ll bet those very same assholes are now demanding gluten-free beer. The entire state of California is soaking in glyphosate and you can’t smoke a cigarette on a public street in many towns there. Americans have been convinced that critical thinking is “negativity.” I prefer the company of cats. I’ve got Netflix, Hulu, and YouTube, lots of pot, and a fridge full of beer.

I staunchly refuse to have my sensibilities insulted by engaging in discourse with people who get their history from Hollywood. There were three great dystopic novels unsettlingly predictive of the arc of the 20th century. Everybody knows the first two: George Orwell’s 1984, and Aldous Huxley’s Brave New World. The third one is referred to as a “fabricated text,” but is in fact a plagiarization of an earlier work. It’s a novel, lifted from an earlier source and embellished at some length. Matvei Golovinski’s The Protocols Of The Elders Of Zion is a deft and prophetic work of fiction that quite a few people who should’ve known better were convinced that it consisted of the minutes of an actual meeting of a conspiracy of Jews. It reads like a parody of Theodore Herzl’s ideas, and it comes as close as the other two novels to providing a rough blueprint for the 20th century.

It’s good that the Overton Window has shifted to the point where we may openly discuss Jewish power. No one wields white privilege as effectively as the Jews. True anti-Semitism requires darkness: it’s predicated on a myth of victimhood that mirrors Jewish paranoia about Gentiles. In an open dialogue, real issues could be cleared up and some level of mutual understanding achieved. When every Jewish organization in America rises up to denounce Trump’s references to the obvious collusion between the Clinton campaign and international bankers and media moguls as “anti-Semitic” when he did not mention Jews at all, it just plays right into the hands of the resurgent Nazi movement.

Here’s a useful thought experiment: every time you see the word “Jew,” substitute “white male,” and vice versa. This is especially fun with Black Lives Matter and Nazi material. It’s like a game I used to play with those old Jack Chick tracts, where I’d take some White-Out and a fine point marker and change every reference to “God,” “the Lord,” “Savior,” or “Jesus Christ” to “BEER.” Jack Chick died last week, God bless him. He made this world a little bit weirder. Every effort counts.

It’d be terrific if one of these endless Holocaust tribunals would haul George Soros before the dock and put him on trial for his wartime collaboration with the Nazis in the deportation of Hungary’s Jews. I’m not holding my breath, but it’d be a great day for democracy, especially considering that one of his companies manufactures the voting machines used in 16 states. As Josef Stalin once famously opined, “It doesn’t matter who votes. What matters is who counts the votes.” My instinct is that this election is going to drag on for a month or so, like the one in 2000. This one is really going under the microscope. The whole world is watching as America reveals itself for what it really is.