In Need of a Neo-Nuremberg

There's no shortage of useless idiots. 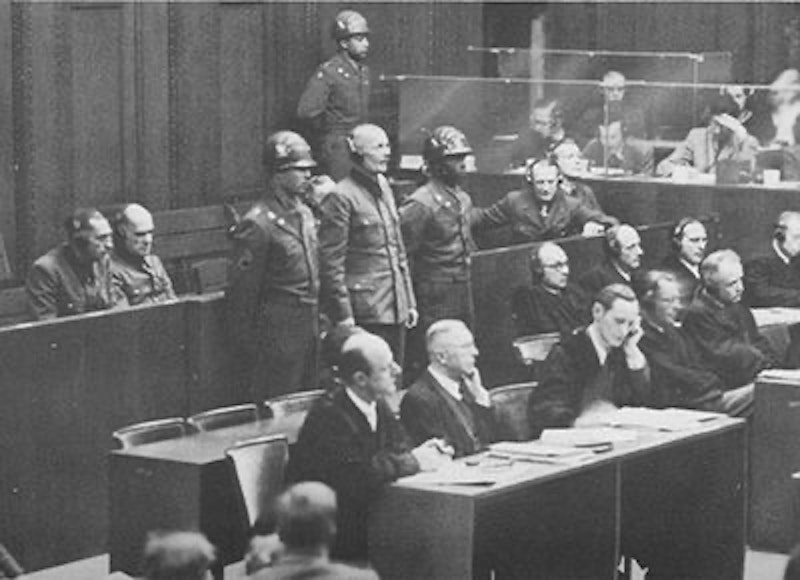 Russian military forces slammed into Syria on Wednesday and did more damage to the various proxy “terrorist” groups there in one day than the USA has in four years. They bombed the crap out of a CIA training facility. They gave the Pentagon just one hour’s notice on their airstrikes, and they’re not coordinating their efforts with either the USA or Israel. Russia has a remarkable track record in dealing with terrorists, and international law is on their side. Unlike the American forces operating there, Russian military aid was requested by the democratically elected government of Bashar al-Assad. The NATO/Israeli plan to systematically destroy every secular Arab state in the region just met its match. By Christmas, ISIS will be a bug splat.

Raving lunatic and ex-POW snitch John McCain called the Russian action “a classic example of the Russians treating the United States with complete contempt.” Considering that the United States and NATO have been demonstrating nothing but contempt for international law for at least 14 years, that statement is as laughable as everything else that McCain says. He’s a dangerous buffoon. The fact that he and that demented woman from Alaska got as close to the Oval Office as they did still gives me agita.

Mainstream Western news media is nothing but a leisure service of the CIA, thanks to the blinding success of Cord Meyer and Frank Wisner in implementing Operation Mockingbird. Persons interested in the true origins of groups like Daesh/ISIS/ISIL, Al Nusrah, and Al Qaeda should look at Operation Gladio, the post-World War II NATO effort to thwart the possible spread of communism in Europe through false flag attacks employing useful idiots and skilled handlers. There’s no shortage of useful idiots, that’s for sure. Here in America, we usually relegate the useless idiots to Congress or customer service jobs at Comcast.

The USA has a long and well-documented history of using false flag attacks as a pretext for war: “Remember the Maine!”, the ridiculous Lusitania incident, and the Gulf of Tonkin, to name but a few. Israel was founded on false flag attacks. Russia has no such history. Some comic long ago (it might’ve been George Carlin) once said that there are two kinds of people in this world, assholes and creeps. Dogs are assholes, cats are creeps. Californians are creeps, New Yorkers are assholes. Creeps are sneaky. Assholes are blunt. So it is with states: the USA is a creep, Russia is an asshole.

The Nuremberg Trials are worth revisiting. We hanged 11 Nazis for considerably less than what our leaders have done. All Julius Streicher did was publish a newspaper. We’ve forgotten Nuremberg. The Russians haven’t. The Russians also have recent experience of what can happen to a nation when oligarchs run wild. Vlad Putin put a halt to their looting spree, and the oligarchs will never forgive him.

It’s worth noting that as Russia stepped up to the plate in combatting Middle East terrorism, they simultaneously opened the largest mosque in Europe. Russia has defined itself as a fundamentally white Christian nation, tolerant within limits. Contrary to American propaganda, homosexuality is not illegal in Russia. They just don’t want drag queens in jock straps and feather boas roller skating on their streets, or a Folsom Street Fair with exhibitions of cock and ball torture out in public where any child can see it. That level of surrealism is uniquely American, and does not play well in Moscow.

The Russian Foreign Ministry has confirmed that Daesh has nuclear weapons material. There’s only one country in possession of nuclear weapons material that is not subject to IAEA inspection and inventory. That same country has long expressed a desire to expand its borders from the Nile to the Euphrates, represented by the two stripes on its flag. Through bribery and blackmail, they have manipulated the USA into being the prophesied “rod of iron” with which they will “rule the nations.”

It won’t happen. In the next few months, a new and distinctly multipolar world will emerge, one in which the rule of international law and the balance of power are restored. We need a new Nuremberg court. We owe the Nazis we hanged either an apology or a lot more hangings. Myself, I’m disinclined to apologize to Nazis.