No time for fun at college today. 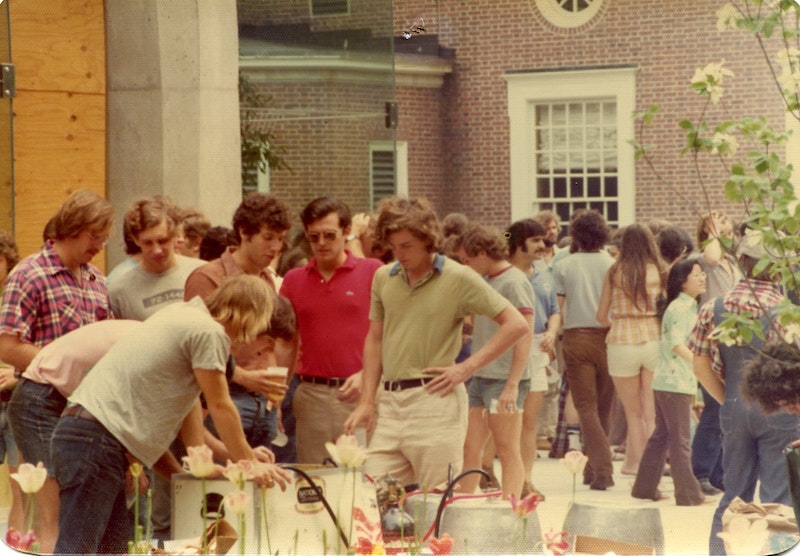 As I found out this week, naiveté doesn’t diminish as one ages and winter turns to summer in two shakes of an artisanal lamb’s tail. I’ve followed the current brouhaha over the cessation of “covered” first-semester grades for freshmen at Johns Hopkins, and chalked it up to more of today’s very weird academic environment. When I read a Baltimore Sun story about it all, and learned that the practice began in 1971, two years before my own entrance to the university, I was curious. Never heard of it, never saw any of my pre-med friends—who, at least back then, would be most affected—wipe their brow after a dismal collection of grades.

The other day I contacted an old buddy at JHU and he, who began as a pre-med and later switched majors, said it saved his bacon as an 18-year-old. I was one of four English majors in the class of ‘77—the undergraduate student body was just 2,000 at the time, but looking back I’m still astonished just a quartet of us chose English—so wasn’t subjected to the rigors of organic chemistry, physics and arcane (to me) math classes like the future doctors were. As it happened, my first semester was a success, four A’s and a B, but I ascribe that to still being in a high school mentality when every single grade was essential for admission to a preferred college. The remainder of my transcript was littered with Gentleman C’s, and I racked up the limit of two D’s by first semester of sophomore year. The classes I selected were reading-intensive, with no apologies from professors for workload, and were valuable to me, even if my grades were crummy. Then again, I had no plans for grad school.

Nevertheless, I was struck by the following paragraph in The Sun: “Students say the university’s mental health services are inadequate to meet the needs of those who will be stressed out by the change. They say the practice helps protect students who struggle to adjust to the demands of college.” And incoming senior Chase Alston was quoted as saying, “A lot of kids come here from private schools. They’re better equipped to handle coming to school. Students from marginalized populations, they may need more time to figure out what resources work for them and what study habits work for them.” I’m sure young Mr. Alston was well-meaning, but talk about euphemisms! Most of my friends came from prestigious prep schools, and not just a few who, whether at their parents’ behest or own genuine interest, chose a pre-med track either flunked out after three semesters or switched majors. Then again, I didn’t know many ultra-serious students—“throats,” they were called—because they rarely came up for air, and I suppose a sizable amount of them are living the medical dream today, although that profession—given malpractice insurance—has also seen its share of “marginalization.”

No one needs a reminder that private colleges today charge an unconscionable sum for tuition (and state universities are no longer bargains)—my first year the tab was $2,700, reasonable if dear in 1973—and I suppose that gives students, aggrieved over God knows what at any point in the year, some ammunition. But Erica Taicz, protesting the new policy of grade transparency, does appear a bit out touch, telling the Sun reporter, “I’m paying to have a support network, academically and mentally. I can’t be expected to do well in class if I’m depressed and have anxiety. If the school is worsening my anxiety, that's their problem and they need to be held accountable for that.” I’d imagine that’s a common sentiment, but I wonder if students really think Johns Hopkins administrators give a hoot about such complaints. Also, if the “anxiety” is so debilitating, perhaps it’s time for a transfer. I’m not at all dismissing the pressure on today’s young collegians, just wondering if some take on more they can handle. Persistent depression is nothing to fool around with.

As a friend—who now teaches at a well-known college—told me, “I’m sympathetic, but doesn’t anyone have fun at school anymore?” The picture above, taken in the spring of ’74 near JHU’s dorms, is fairly typical of warm days, some not even on weekends. A line for beer—even though the drinking age was still 21, lowered temporarily that fall to 18, giving the university license to build a bar on campus—and probably a concert a home run’s length away. I see some future doctors and lawyers, for example, in this image, so apparently they mixed recreation and rigorous study. And isn’t that the desirable balance?