I Should Have Written Doc Savage Books in High School

I’ve been thinking about this. 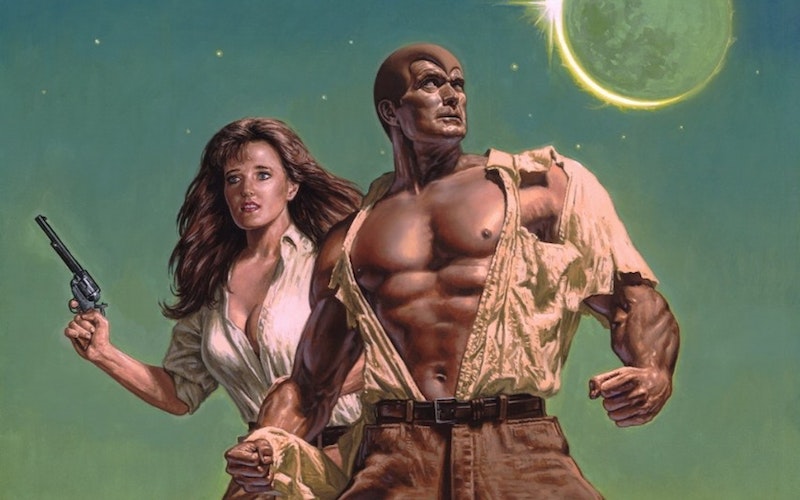 I spend so much time on my regrets. Here’s one way you can tell: even the big ones can be oddly specific. For example, I regret my failure to write Doc Savage novels in high school. What if I’d come home, looked at the TV and had a glass of milk, and then fished a notebook from the little metal desk in my room? I see myself sitting down, turning to the page where I left off, and launching in. “‘Huh,’ Monk grunted. ‘Do it fast or this whole tunnel could come down.’ An ominous shiver gave credence to his words.” Or something like that.

In high school I was five or six years past my Doc Savage phase. But that would be the point. Yes, as a little kid of nine or 10, I had bought the Doc Savage paperbacks and read them happily. Maybe a dozen, I forget. Then they joined the clutter in my room. I went on to Isaac Asimov and the rest, and after that to books for big people. That’s how I looked on my progression. I wanted to be a writer, and I understood little about that idea. For instance, I thought job one was to pass, namely as a sneakered version of The New York Times Book Review. Since I had no adult life to write about, I figured there was nothing for me to write. Meanwhile, Doc Savage sat there.

I never once thought of him. If somebody had suggested it, I would’ve considered them offensive. I imagine my teenage self complaining to some adult about my situation. The adult, glancing about my room, says, “Why don’t you write about… Doc Savage?” They say this with the airy, off-hand largeness of somebody who sets off a truth bomb. I shrug and pout. “No,” I say. “That’s not it.”

True, I didn’t care about Doc Savage or death-defying action-adventure. But I didn’t care about bonds or the Philippines or various other subjects I dealt with as an adult at a job. Writing or editing the necessary copy still left me better off. I’d learned, I’d practiced. In the meantime I’d been paid, which supplied my motivation. There’s no pay for writing imitation pulp novels in your room. Worse, nobody would be impressed. Or so I must have figured, far off in the back of my mind. If I’d thought that writing novels about Doc Savage would have impressed my parents’ friends or the kids at school, I bet the idea would have occurred to me. As usual, I wasn’t tuned into peer opinion. Looking back, I recall how impressed kids are by anybody their age who sticks to a project. But I made my call, and it says a lot about me. No prestige, no work.

If I hadn’t made that call, then one day in my mopey 14th year I might have counted chapters in one of my old paperbacks and started writing. The Doc Savage books were short and they were always the same. Pulp heroes worked by formula, and skimming a handful of the books with my developing brain would have given me a master outline. I don’t know what, but this many pages before the first big crazy set-piece, this many before a girl appears, when does the enemy get beaten. Then I could apply the outline. That’s what writing my first novel would have been: a training-wheels business with nothing at stake but starting the book and then finishing it without a mess. Which is the opposite of my actual first novel, on which I balanced my life and which I think I’ll never really finish.

I could have written another and another, embroidering them, bringing in my own ideas, learning about streamlining a scene and planting a surprise. After all, I had nothing else to do, no friends to talk to, and work makes a person feel better. Anyone in their teens has learned as much, if they’re willing to pay attention. And I kept telling myself I was supposed to be writing.

Neil Gaiman and Stephen King spent their young years churning out fiction that never got published. They wanted to be writers, so they wrote horror and science fiction and anything else that occurred to them. Look how they turned out. I wanted to be a writer, and teenage me could have been sitting in my room and writing. But I figured nobody would pat me on the head, so I didn’t.