Conspiracy narratives are fine if they support the agenda of the economic elite. 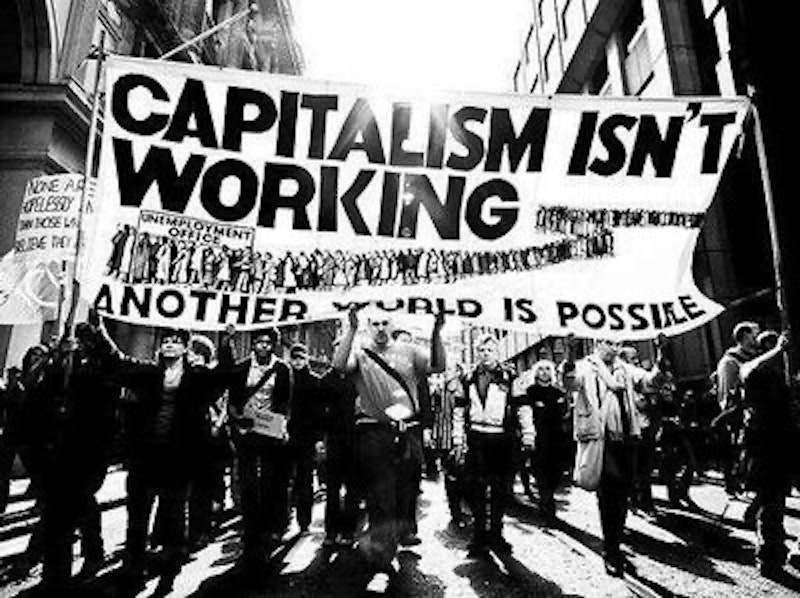 Manufactured crises abound these days. The primary function of the corporate mainstream media is to whip up as much public fear and hysteria as possible over contrived threats and enemies, and then wrap it all up with rosy reports about our robust and thriving economy and the fundamental decency of the American people. Conspiracy narratives are fine if they support the agenda of the economic elite, no matter how fantastic or implausible they might be. Any narrative suggesting collusion between the public and private sectors or the existence of a “Deep State”, i.e., a secret government, is dismissed as “conspiracy theory,” unworthy of attention. If you’re struggling to get by, it’s your own fault. Maybe you need to start taking an anti-depressant. There’s an epidemic of suicide going around.

It was right around the New Hampshire primary when the Flint water crisis story broke. I recall Hillary Clinton making a speech in Manchester, announcing that she’d be going to Flint to assess the situation. She could’ve clinched the election right there. The great genius inventor Dean Kamen invented the Slingshot, a device powered by a Stirling engine that can extract pure potable water from virtually any liquid. It has been successfully deployed in Ghana and other Third World shitholes, and can be operated easily by uneducated simpletons. The biggest investors in the device are Coca-Cola and the Clinton Foundation. Kamen’s company, Deka, is headquartered in Manchester, New Hampshire. Had she gone to Michigan and announced that the Clinton Foundation would be providing Slingshots to the people of Flint, Clinton would’ve demonstrated the will and ability to deal with an urgent problem swiftly and appropriately, and she would’ve easily cruised to victory. Instead, Coca-Cola is cashing in, shipping truckloads of Dasani water to Flint at the taxpayer’s expense. You probably haven’t even heard of the Slingshot before.

The Zika virus was first identified in 1947 in Uganda. Until recently, it’s worst effects were mild flu-like symptoms. It’s rampant in South America. It has never before been linked to birth defects. The microcephaly outbreak in Brazil coincided very neatly with the introduction of a larvicide—pyriproxifen—to the drinking water. It was introduced to kill mosquitoes. Correlation does not equal causation, but it’s interesting that establishment media has focused exclusively on Zika as the cause. It’s a great marketing opportunity for a new vaccine.

Flooding the White Christian nations of Europe with hordes of brown-skinned Muslim invaders is a terrific way to destroy the fabric of their cultures and break their sophisticated social welfare systems, thus enabling privatization, American-style. Soon Europeans will be free to be bankrupted by routine medical procedures, just like us. This particular agenda might fail, owing to a resurgence of National Socialism. Europeans are beginning to appreciate the difference between racism and cultural hygiene, except for the feminists, who seem eager to excuse any transgression, even rape, as long as the perpetrator is black or brown.

Self-styled pundits and others of the ilk that Nixon speechwriter William Safire would’ve labeled “nattering nabobs of negativism” have called Donald Trump’s deportation scheme unrealistic, impractical, and even impossible. It’s actually pretty easy: stop the bogus and ineffective “War On Drugs” and redirect those law enforcement resources toward rounding up and deporting illegal invaders and prosecuting those Americans that exploit them as slave labor. Eisenhower did it in the 1950s, with Operation Wetback.

There’s no excuse whatsoever for not drug testing any and all law enforcement personnel whenever they discharge a weapon. Ordinary citizens are drug tested all the time. You have to pass a drug test to sell rugs at Ikea for $10 an hour. Someone entrusted with the use of lethal force ought to be held to a higher standard than a minimum-wage retail worker. I suspect that steroids might be an issue. Just a guess, but I do know a thing or two about drugs.

A thoughtful and vigilant citizen might take the time to research projects like Cord Meyer’s brilliantly effective Operation Mockingbird or NATO’s Operation Gladio. No one in their right mind trusts anyone who’s motivated exclusively or even primarily by profit. Capitalism is cancer, and it is metastasizing. We’re entering the end stages of the American Empire. It’s important at this time to remember Marshall McLuhan’s great admonition, my favorite quote of his: “There is absolutely no inevitability so long as there is a willingness to contemplate what is happening.”