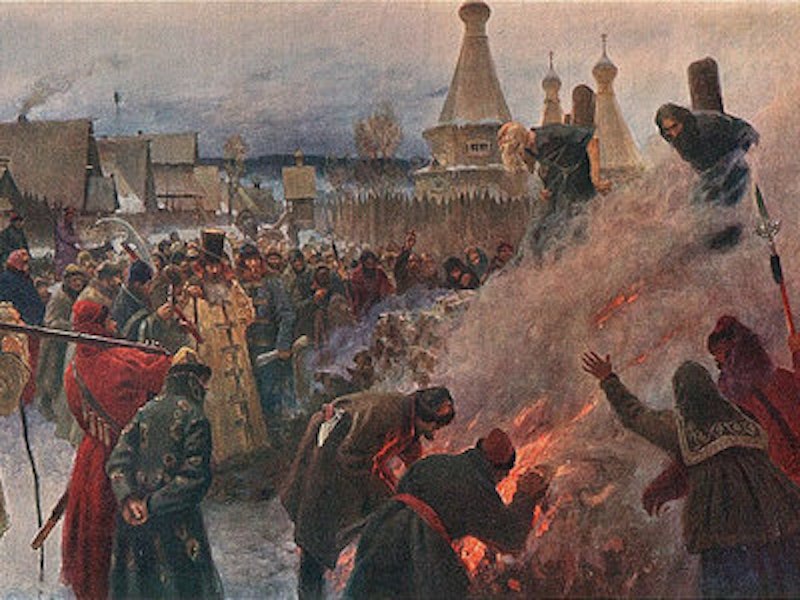 Our adolescent daughter’s entrance into sexual maturity continues to challenge Mother and me.

I do not mean only Daughter’s new forays into nocturnal self-pleasure. I have in mind her budding sexuality more generally. She has started to prattle about boys and to show an interest in the tools and methods by which the weaker sex ensnares them, from earrings to mascaras to revealing clothing—that is, all the vile technologies of the Western capitalist jade.

I know what I would tell Daughter about all of this nonsense, were she to ask me. I would tell her that, in her vanity, she is offending Our Lord; I would tell her that, as a member of the Russian Orthodox Church, she is charged to lift her eyes above the American whorishness that surrounds her and, young as she is, prepare herself for a virtuous death. For we are put on this earth to suffer and to die.

But she has not asked me.

Still, I have not been useless to her in her current crisis. A member of our little Orthodox community here in Indiana, a Russian émigré woman, was kind enough to pass along to me the name of her great-uncle, an elderly man living in reduced means in Indianapolis. This gentleman covertly studied as an Orthodox seminarian during his Soviet youth. Though he never entered the priesthood, he is nonetheless deeply versed in Orthodox doctrine, and would be glad to mentor a young girl on what the Church expects from her sexuality.

My Russian friend also informed me that this gentleman had, during Perestroika, led young girls on spiritual retreats into the forests around his home in Volgograd. So much the better. I have long suspected that Daughter requires an Orthodox advisor/confessor more learned than I to guide her through the dark wood in which she finds herself; but I have despaired of finding one. God, however, saw our need, and, in His love, sent us succor.

Not that Daughter sees it that way. She is against this plan, grunting about the “awkwardness” of discussing sexual matters with an elderly man. “Your idea is so insanely disgusting and perverted,” she said, before taking the name of our Redeemer in vain in a way that almost forced me to raise a hand to her, which I normally do but rarely.

“Disgusting.” “Perverted.” This, from a girl of this modern world, a world in which girls discuss their rutting in the social media, posting swinish photographs of themselves in flagrante delicto with hockey players and policemen. To make her feel better, I reminded her that she would be alone with Dmitry Vladimirovich (such is the old gentleman’s name) during each of their two-and-half hour sessions, and thus could speak to him in complete confidence. There would be no public “shaming” involved, and I would demand of Dmitry Vladimirovich only broad outlines of their talks, without delving into potentially embarrassing details.

A more practical objection to this scheme is that it is a two-hour drive to Indianapolis. That means that both Daughter and I will dedicate our Saturdays to it almost in toto. But what I lose in terms of time I expect to gain in terms of “bonding” with Daughter, who more than ever requires a father’s stern guidance. I expect to spend our car time in lively conversation with the troubled girl. For our first drive, topics will include the colorful career of Avvakum, proto-pope of Moscow’s Kazan Cathedral. I will touch on Avvakum’s burning at the stake and other incidents associated with our Holy Russian Orthodox Church’s most-tragic Schism.

Dmitry Vladimirovich, by the way, seems a fine man. Despite the stroke he suffered in his late 80s, he apparently retains most of his speech function and mobility, and I am told he delights in telling fascinating stories about his famine-ridden childhood in the Volga region during the Great Patriotic War for the Fatherland. His room is decorated not only with Orthodox icons, but also with a portrait of Mr. Putin, which indicates to me that he has a proper skepticism of the United States’ interventionist foreign policy, of the NATO death-grip on the throat of his native country, and of the EU’s imperialist homo-fascism.

His English is merely serviceable, but I am sure that Daughter and he will make themselves understood to each other.