Shut Up, Or Get Shut Down

Dealing with catcalling as a trans woman. 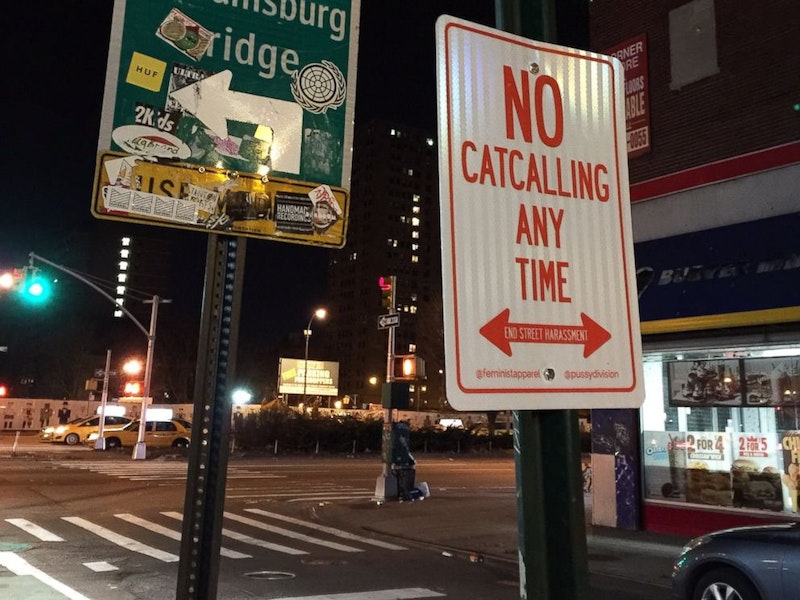 It was a hot night, and I was glad to be wearing a breathable dress. Honestly, I was glad to be wearing any dress; having only been out as a trans person in any capacity for a few weeks, wearing whatever I chose was still a fabulous novelty. It’s still something I try not to take for granted, but that night, I felt glamorous and confident, strutting down 99th St. in Manhattan in my bright pink summer dress and wedge-heel sandals.

Then, as I passed a apartment building where two men stood, talking, it happened: my first “hey, baby.”

I didn’t respond, but I admit that the dude’s appreciation for my body was more than appreciated. When you’re not only insecure about your appearance, but your very identity as well, you take validation where you find it. Even though I was sure the catcaller had no idea what I really looked like in the gloom, it was a step.

Of course, a few weeks later, the novelty had worn thin. I quickly grew to learn the reality of catcalling, which I’d been sure was a relic of a bygone era only a few years prior. Raised in the Appalachian boonies of upstate New York, I didn’t have much opportunity to witness sexual harassment in real time; since my girlfriends never talked about it with me, I assumed that, since I’d only seen depictions of catcalling in old issues of MAD magazine, it was a big-city phenomenon that had probably died out ages before I was born as feminism grew in social import. Cue laughter from all the assigned-female folks reading this.

Several years ago, my then-girlfriend explained to me that she’d been catcalled since she hit puberty. My mind was blown. Every time she came home with a new story about how she’d been harassed on the street walking from the subway, my blood boiled. How could people find this to be appropriate? (Bob Beckel, whose “you’re a piece of woman” remark during a Fox segment on catcalling remains a low point for the career media hack, is personally invited to answer this question.) The more stories I heard from my friends and loved ones, the angrier I got. I’m still hearing them, about such exquisite male specimens as the ticket seller in Times Square who was “jealous” that a woman’s male friend would be “getting some tonight.” A friend of mine with whom I grew up told me she was even catcalled while walking in the countryside, that a grown man in a truck told her she was sexy—then made a U-turn to drive back and look at her again. She was 14.

Horrific as all this is for female-identified people of all types, I’m finding myself fascinated by how trans women are affected by catcalling—and how cis men are adapting to our growing visibility. Several friends have confided that they were once as flattered as I was to be harassed in public, but that their anger and fear grew over time. One friend told me she was accosted late at night by someone who wanted money, until he took a closer look and asked aggressively, “Are you a transsexual?”

Pooling our experiences, we realized that men are starting to take time to figure out what they’re dealing with before barreling forward into full-blown catcalling. Since I live in front of a bus stop, I’ve become accustomed to people sitting on my stoop while they wait, but I wasn’t prepared for the guy who’s apparently been watching me traverse the neighborhood of late and who asked point-blank last week: “Are you a girl?” I was so taken aback that I couldn’t even be silent, and I stammered out a quick “yes” as I opened the door. “I LOVE YOU,” he bellowed in reply. “That’s nice,” I squeaked as I rushed inside. As long as guys can be assured that they’re dealing with an authentic female (whatever that means), we’re fair game for come-ons.

Then again, outright chasers can be worse. Ask the trans girl who was followed for blocks by a guy who told her she “needed to experience” him because he liked “girls like [her].” If you’re going to get catcalled, at least hope for someone like whoever gave another of my friends her first catcall while she was wearing pants; after delivering his lackluster sales pitch, both of them kept walking in opposite directions, but were each so surprised by the other that they turned around to get a mutual second look. Leaving them too confused to process their emotions is better than having them follow you home.

I found that out one night when I was walking home from the train station. Replying angrily to a catcall I barely heard over my music, I picked up the pace and hustled inside as the man who I now realized lived in a neighboring building followed me right up to my door. The next day, I ordered mace.

It’s that mouth that gets me in trouble. I can’t let things like that go—or rather, I only do when I can’t think of anything to say. But the way I see it, my life’s in danger from these dudes no matter what I do, just like every other woman’s. Whether we keep our mouths shut and run, humor them, or just firmly say “no” or “go away,” we’re liable to get beat up or killed for our troubles. Why self-censor?

Cis women have accused me in the past (online, never to my face) for the “male privilege” of getting up in a harasser’s face without consequence. Leaving aside the point that I am actually putting myself at risk, given that 13 recorded trans murders have occurred this year so far in the U.S., I hardly think I’m alone in this. A dear friend of mine interrupted a predatory male at a bodega the other night and got into a verbal altercation with him, during which he growled something about “fucking [her] in the ass to teach you your place” and other charming epithets. An act without potential consequence? Hardly. But I’m sure the other girls he was preying on appreciated her help. And maybe he’ll think twice next time, if only to avoid losing face in front of another “fat bitch.”

This morning, I was on my way to the subway when a man on the corner purred “very nice.” “Nobody asked you,” I called back over my shoulder, and kept walking with a smile on my face. Boys, you’re on notice: shut up, or get shut down.