Someone told me it’s all happening at the zoo. 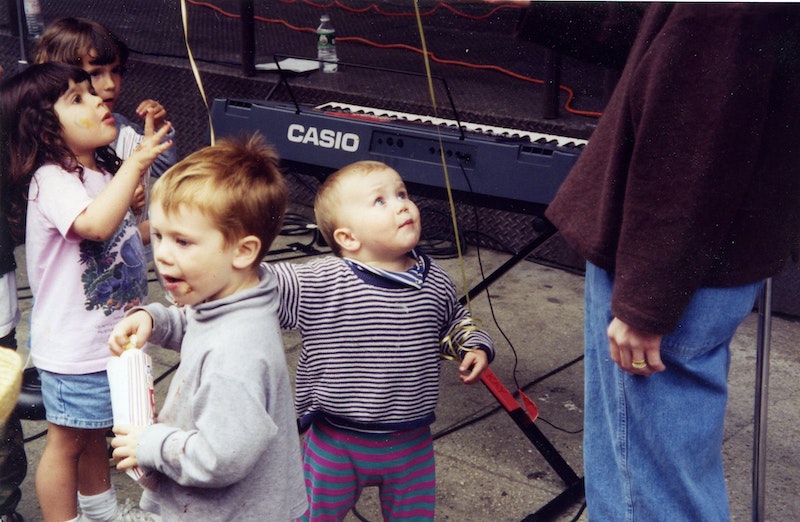 Last Saturday morning, my son Booker and I steeled ourselves for a bi-monthly visit to the Towson Town Center, an innocuous (charitable, it’s Good Friday) collection of shops that’s about a 15-minute drive from our Baltimore City home. Put it in the chore category: I was in need of Kiehl’s face moisturizer—the only “beauty” accessory that this pre-metrosexual purchases, thanks to dry skin that stings like a bumble bee if not applied post-shower each morning—and the Nordstrom’s there is the only place I can find it. (A couple of weeks ago, I was getting a five-minute haircut at Hampden’s Old Bank Barbers, and at the conclusion, the young fellow with the razor asked if I wanted any “product” in what remains of my gray hair. I looked at him incredulously and said I was “old school.” He said, “Ah, you were a Brylcreem kind of guy,” which was a scream since I don’t remember any of that stuff in our bathroom growing up.) At one time, in the rotating roster of retailers at downtown’s equally depressing Inner Harbor Gallery, there was a shop that sold the goop, but it went out of business in about three months. Booker was a good sport: there was nothing in it for him, save for the ritualized dad & son weekend gabfests we’ve had since he and his brother Nicky were tots, and we’d have preferred to browse at Fells Point’s Soundgarden.

Anyhow, on the drive home, Booker took me aback by professing that he finds suburbs “fascinating,” perhaps owing to the English-heavy curriculum he’s navigating at college this semester. As someone who grew up in suburban New York, in Suffolk County, an hour from the city, and who’s been an urbanite since 1973, I was about to verbally fence with my son, but he beat me to the punch, and largely withdrew the remark. I do understand why some of my Baltimorean friends gradually moved to, say, Baltimore County—better public schools, less mischief, handsome houses and grounds—but it’s not for me.

The picture above—around 1996, with May Conley, Nicky and Booker, and the legs of my wife Melissa—could’ve been snapped in almost any American city in any season but winter. As it happened, this was in Manhattan’s Tribeca, and there’s a lot going on. I’m guessing it was a street fair, with the music set-up, popcorn and ice cream. I’ve always liked this sort of event, especially the ones that aren’t pre-fab, with the same funnel cake and sausage clock-punchers who move from neighborhood to neighborhood each weekend.

The downside of living in a city—especially New York—is the constant construction (and street fairs) that block traffic and cause motorists to go kablooey. Baltimore’s not so bad in that regard—at least now, since the endless tearing up and putting back together of N. Charles St. mercifully reached its conclusion—but it ain’t great. New York’s the worst, naturally, and while I do get nostalgic about the Swinging 1990s when visiting these days, I don’t at all miss the long cab rides because of a water main break, impromptu construction or presidential visit, although I still get a kick out of all the honking and hollering—as if that’ll help—and pedestrians jaywalking and giving an angry finger to anyone who objects. It’s all so blasé. I won’t soon forget the time, back in ’84, when I was walking in Soho and the driver of a van backed out of an illegal parking spot, oblivious (or stoned) to all around and hit me square in the back, sending me sprawling on Crosby St. The culprit himself just drove off, though a few passersby asked if I was okay. I waved them off, and aside from instant lumbago and dizziness it wasn’t that big a deal.

I’m reminded of this as I look at #NeverTrump Twitter posts, promising that The New York Times and other outlets are just waiting to pounce on the impolitic lug with devastating articles detailing his involvement with the mob back when he was still a real estate developer. It won’t wash, and not only because none of Trump’s 1,018 offensive barbs haven’t stuck, but rather that anyone who works in New York knows that acquiescing to the mafia is just a cost of doing business. There’s a reason that the ugly, and dangerous, scaffolding that defines the city as much as anything else stays up for so long, and only a simpleton couldn’t figure that one out. When I first set up offices on Spring St. for New York Press in 1988, I was that simpleton, objecting to my landlord’s $150 monthly fee for getting rid of trash. “Oh, we can take care of that ourselves,” I told Kenny, a pretty good guy once you pierced his disguise. He looked at me like I was from… well, Baltimore, and said, “No, you don’t understand. You’ll pay the fee and be happy about it. If not, certain men will explain it to you, and, more importantly me, and I don’t need another fucking headache.”

I’ve gone down a lost highway from the disagreeable Towson Mall at this column’s start, but a little dab’ll do ya on that subject.