Disappointed By a Role Model

We were both seeking to seize our identities with both hands. 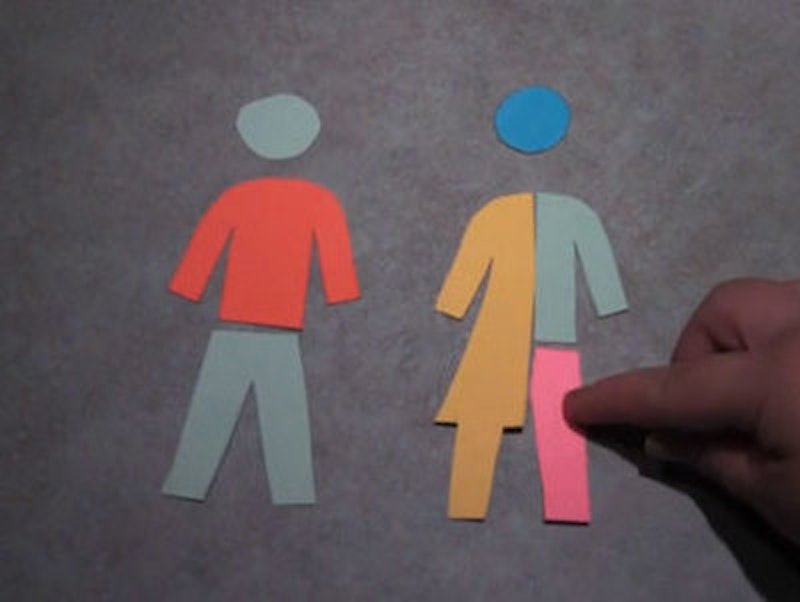 Content note: This column contains frequent use of transmisogynistic slurs due to its subject matter.

I’ve written previously about Laura Jane Grace, and why she’s been such a big figure in my life since I realized I was trans last year. After a friend referenced Against Me!’s album Transgender Dysphoria Blues in a poem, I looked them up and was captivated. TDB is a gut-punch of a record even if you aren’t trans; for me, hearing the line “In her dysphoria’s reflection she still saw her mother’s son” on “Paralytic States” destroyed my ability to pretend I wasn’t feeling something like that when I looked at my reflection. After seeing her play in Brooklyn, I was eagerly anticipating her forthcoming book, from which she’d read in between songs. I was sure it would be a tour de force of trans punk emotion.

Then Laura Jane announced the title of her book. It will be out in November from Hachette, and it is called Tranny.

When my friend Lindsay (with whom I’d attended Laura Jane’s show) told me the news, I tensed up. Surely there was a good reason she’d changed it from the far-superior Kill Me Loudly? I argued with myself and decided that my hero was merely reclaiming the word, as many have chosen to do. That was her right, was it not? And mine as well? We were both seeking to seize our identities with both hands, after all, and declawing a slur through reclamation is a common practice in marginalized communities. I would never refer to myself as such, I reasoned, but Laura Jane could—after all, she’s punk rock! She tattooed her entire right arm black! That seems like something an edgy chick like her would do.

But the more I considered it, the less that argument made sense. Reclamation really only makes sense given context, in this case, Laura Jane’s book. I’ve no doubt that “tranny” appears in more than one chapter, and that its use by both cisgender and transgender people is examined thoroughly. But to slap “tranny” on the cover with none of that care or artistry is to release it into the wild once more—only this time, bearing the endorsement of one of the most recognizable trans artists in the music industry. Just like I as a younger, more foolish white person once felt allowed to throw around the n-word in my poetry, simply because of a Donald Glover joke (and some dubious, Stephen Fry—adjacent opinions about free speech and offense), I began to fear that cis people—who already call trans women “tranny” with bigoted glee every day, while we are attacked and murdered—would feel empowered to reintroduce the slur to their lexicon without fear of reprisal.

That wasn’t the worst part, though, as others in the community pointed out to me. Again and again, I read anxiety-ridden posts from trans girls who now lived in dread of their local bookstores come November, nervously awaiting the day when they would pass by a stack of books screaming a word that had been thrown at them by abusive lovers, parents, strangers. They wrote of their terror of being cast under greater scrutiny as a result of the book’s visibility in stores and on talk shows, their already shaky safety jeopardized. Never having been the target of the slur myself, I had no idea how they felt, but I witnessed the expression of their dismay with a sinking heart. How could my beloved Laura Jane, who once upon a time I desired as a mother figure, do this to us?

And then the rug was truly ripped from under me. As the community tapped out their disappointment to Laura Jane over Twitter, her response broke my heart. While she acknowledged that she’d known the title would upset and anger people, and that it was a stomach-turning word even for her, she fired back with shocking vitriol against her sisters for even the most (initially) even-handed criticism. Denying that her wealth “insulated” her from slurs (despite a commonly estimated net worth of $5 million) and accusing her critics of “literally judging a book by its cover” (despite repeated assertions that the book itself was not at issue), Laura Jane shut down all subsequent debate by flat-out denying that any harm will come to anyone as a result of her choice and gaslighting.

Not only is this shocking and immature behavior from a 35-year-old woman, it’s also tremendously damaging to those of us who see her as a role model. I still find it hard to reconcile the Laura Jane of TDB and that Brooklyn show with the one I saw on Twitter this past Monday: the former a strong, emotional powerhouse who wasn’t afraid to admit her flaws; the latter, a sulking teen hiding from the consequences of her actions. No amount of context from her book could change the image I saw of Laura Jane that day, and I’ll never regain the same respect I once had for her.

So here I sit, wearing my “Gender is Over (If You Want It)” jersey I bought at Laura Jane’s show, contemplating the final words I read from her before shutting down my Twitter presence for the day out of grief. “I don’t want to represent anyone but myself,” she pled with us. “And I don’t want anyone to represent me.” Maybe so, Laura. I sure wish I had the ability to rely only on myself as a representation to the world. But while that might be your experience as a trans woman, it’s not the reality the rest of us face—the reality that says we must use avatars like Laverne Cox, Caitlyn Jenner, and yourself to be our voices in mass media in order to convince the cis masses that we are real people to be respected, not sex freaks to be beaten in the street. And while you’ll always be the woman who helped save my life, until you’re ready to take on the responsibility that is yours by necessity, the rest of your sisters will pay the price of your privilege.