The Girl and the Sandwich 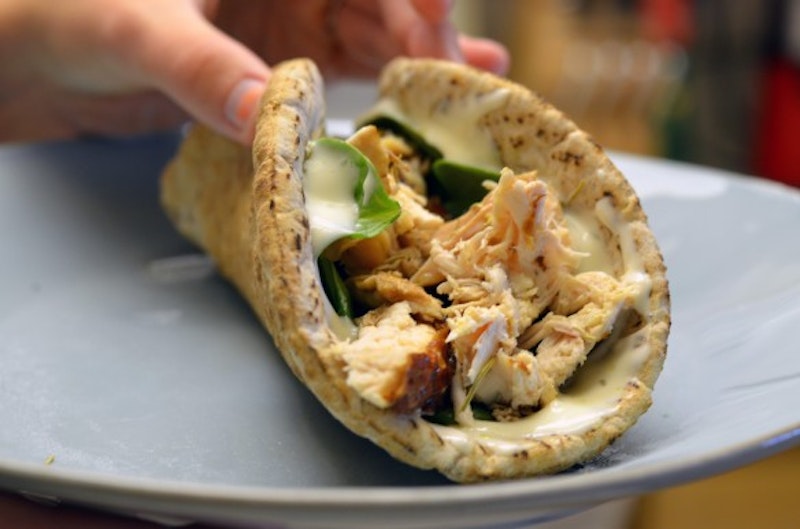 I spent a decade and a half living near a big university. One benefit was the presence of girls in their early 20s. They shopped in the grocery stores, they strolled the sidewalks, they rode their bikes down the street. You walked into a coffee shop or a fast-food joint and girls were sitting at tables and working behind the counter. Some were pretty, most weren’t, but being around them brightened my life. Not that I talked with them all that much, being shy and well past my prime. But a Buddhist told me my attitude matched well with his religion. In the Buddhist view, people are ahead of the game if they can enjoy, say, the smell of a flower and leave it at that.

During my last week or so in this neighborhood, I stopped by a place called Pita Hut. Like Subway, it’s a place where the fixings for your sandwich are laid out in metal tubs. You’re on one side of the acrylic, they’re on the other, and you tell the counterperson what you want as your sandwich gets assembled. Any bachelor who eats cheap will develop a routine for this process. There are bits of wording that come in handy, and you have to know when to warn the person off some dreadful item that seems to lure their hand (in my experience, cucumbers). You do this without being muffled or peremptory, and you treat it all as kind of a joke because it is. I mean, the two of you being so serious about whether cucumber winds up in your sandwich.

The counterperson was a girl of 22 or 23, heavily built, with lemon hair and high cheekbones. In pictures and on screen only a few types of girl come off as hot stuff. Real life is different. I wouldn’t have looked too long at a picture of this girl, but being near her felt very nice. She was graceful and she was pretty, and her wide torso narrowed distinctly at the waist before she widened again at the hips. Luckily we had work to do, since otherwise I couldn’t have said anything to her. I have a horror of making girls think I’m coming on to them.

Three or four college boys came in as the girl and I put together my sandwich. The boys sat at a table and waited, since only the one person was on duty.

My pita was done. The girl had piled on the ingredients, loaded them in, and I took that as a sort of compliment. But in the meantime the sandwich had become a wedge, no way of telling which end was up. So, as if giving a demonstration, the girl now held the sandwich beside her face. She pointed at what could be seen of the pita’s opening. “You start,” she said drolly, “here.”

“All right,” I said. “That’s what I’ll do.” I meant just to smile, but I laughed. The laugh jumped out of me. I laughed loud and hard. I suppose I was letting off some tension after several difficult weeks of finding a subletter.

One of the boys looked over at me. He was a slight, curly-haired fellow, and his face split open in a smile. He looked like it made him so happy to see how I enjoyed the girl’s joke. He was doting on me and the scene.

What happened next was that I ate my sandwich while reading A Game of Thrones. The girl took the boys’ orders, some more people came in, and I left while she was busy helping them.

I suppose I must be pretty old now. After all, a college boy liked seeing me joke around with a good-looking girl. Second point: here’s proof that my life, especially my social life, is exceptionally dull. Because every now and then I get out the memory of those few minutes and I run it through my head. It makes me feel better.