The 400, Manifest Destiny and more. 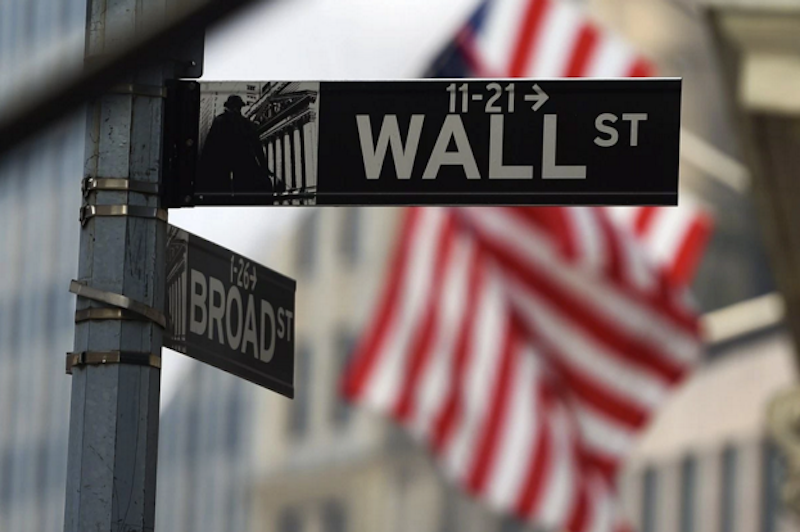 In lower Manhattan, traces of the past can be gleaned from street names, unlike uptown where they are hidden behind numbers. Broad Street was the widest street in the area other than Broadway, and it got that way because tall-masted Dutch ships once sailed down the middle; the waterway, the Heere Graft, was filled in by the 1700s, leaving an especially wide roadway. Old Slip, Peck Slip and Market Slip were once waterways where ships "slipped" in to dock. Bridge Street crossed the Broad Street canal, Wall Street was built to keep marauding Brits and Indians out.

More tangible traces of lower Manhattan’s past from a variety of eras can be located with some frequency both in Trinity Cemetery and on Wall Street, which issues east from Broadway and on which the spire of Trinity Church, once the tallest downtown edifice, has cast an intimidating shadow, since its current manifestation was built in 1846. 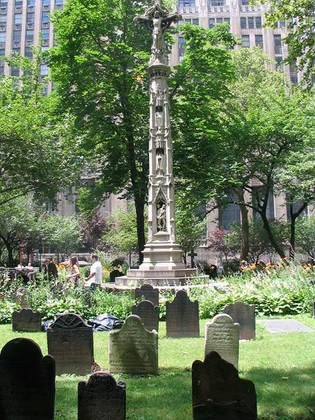 The New York City of the years following the Civil War was a time of great population growth, as immigrants from around the globe flocked here for new opportunities. In addition, an influx of wealthy arrivistes from the Midwest began to challenge the existing social establishments and its founding families, of which Caroline Webster Schermerhorn Astor (1830-1908) was indubitably a part. She decided to do something about this. The best method she could think of was to arbitrarily decide what personages and what families were really the ones that counted.

Assisted by Ward McAllister, Mrs. Astor, as she came to always be referred to, threw elaborate balls to kick off the winter every year beginning in 1872 and listed twenty-five friends who she deemed acceptable to invite, and each of the 25 could invite five ladies and four gentlemen of their acquaintance. In addition, prominent politicians, businessmen, ladies, men of means and debutantes would also be invited, bringing the number to what came to be referred to in hushed terms as “The 400.” The winter balls were held every year until 1892, but the list of The 400 was disclosed to The New York Times after that year, and thus the public was made aware who their betters were.

After Mrs. Astor passed away in 1908, she was buried in Trinity Cemetery uptown (joining many of the Astors) and an elaborate cenotaph, or monument memorializing a person buried elsewhere, was placed in downtown Trinity that featured carven groups of biblical patriarchs, designed by Thomas Nash. Beginning at the bottom, the cenotaph depicts Old Testament figures Seth, Enoch, Noah, Shem, Abraham, Isaac, Jacob, Judah, Ruth, Jesse and David and is crowned with a crucifix. 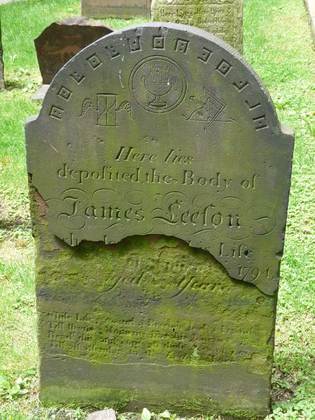 In January 1957, in his New York Times column, Meyer Berger revealed the curious code displayed on the top of James Leeson’s tombstone in Trinity Cemetery at Broadway and Wall Street. Leeson, who died in 1794, left behind an elaborate stone on which are carved Masonic symbols such as a compass and hourglass. (The “G” on Masonic symbols stands for “geometry.”) At the top of the stone are a series of boxes and partly-rendered boxes, some with one dot, some with two, and others blank. For over a century, the significance of these marks was debated… was it a secret message or just ornamental filigree?

Berger reported that in 1889, The Trinity Record (Trinity Church’s newspaper of the period) announced that they had solved the mystery, and it was fairly easy to figure out. Simply set up three tic-tac-toe boards, nine squares each, and place the letters A, B, C, D, E, F, G, H, I in the first; K, L, M, N, O, P, Q, R, S in the second; and T, U, V, W, X, Y, Z in the third. Then, place one dot on each letter in your first tic-tac-toe board, two dots in your second, and none in your third. (Count I and J in a single square: in colonial-era orthography, the two letters were the same.) Using this system, Leeson’s final dispatch is spelled out quite clearly.

“I’d rather be in Philadelphia,” or “To know him is to love him,” perhaps? No. 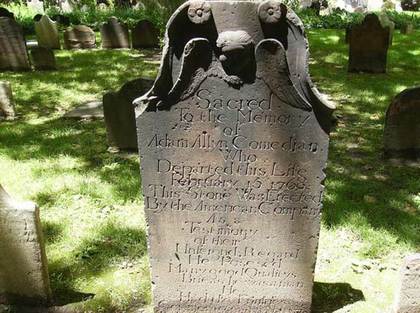 One of the more eclectic tombstones in the cemetery is that of Adam Allyn, whose profession,  ”Comedian,” is inscribed prominently…

“Sacred to the Memory of Adam Allyn, Comedian. Who Departed this Life February 16, 1768. This Stone Was Erected by the American Company as a Testimony of their unfeignd regard. He Posesed many good Qualitys. But as he was a Man He had the frailties Common to Mans Nature.”

Adam Allyn arrived in NYC with his wife in 1758. He made his American debut in Philadelphia’s South Street Theatre on July 20, 1759 in The Recruiting Officer. He also played in NYC, making his first appearance at the Beekman Street Theatre in November 1761.

The American Company, organized in 1758 by David Douglass, is considered the first American professional theater company. On February 15th 1768, the day of Mr. Allyn’s death, he was advertised to appear at 6PM as Old Philpott in a farce entitled The Citizen. 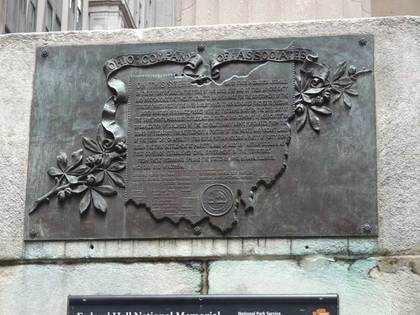 Walking east on Wall Street to Federal Hall at Nassau Street, part of the monument on the corner features a plaque depicting the state of Ohio, with all the history that has occurred here since 1701. Why Ohio?

The answer lies in America's desire for westward expansion that would be later distilled by a phrase coined in 1845 by Democratic Review editor John O'Sullivan, envisioning an America that would extend from the Atlantic to the Pacific, to be its "manifest destiny." Yet as early as 1786, some Americans were already making plans to extend our boundaries west. An organization called the Ohio Company of Associates, consisting of former revolutionary war officers and Massachusetts soldiers, was formed that year to plan the purchase and settlement of lands along the Ohio River, sending Massachusetts attorney and minister Manasseh Cutler to negotiate with Congress, which would soon pass the Northwest Ordinance in 1787 that divided the western lands into territories. Cutler and partner William Duer negotiated two contracts that led to the settlement of Ohio with the first settlement at Marietta in 1788.

George Washington had already surveyed lands in the Ohio River Valley by 1770. After the Revolutionary War, those loyal to the union were not paid with cash but with warrants for land in this so-called Northwest territory. The Northwest Ordinance ceded ownership of the territory to the U.S. Government and so became the template by which western lands were settled and later divided into states. Ohio itself would become a state in 1803 with its first capital at Chillicothe. The plaque at Federal Hall commemorates the Ohio Company. 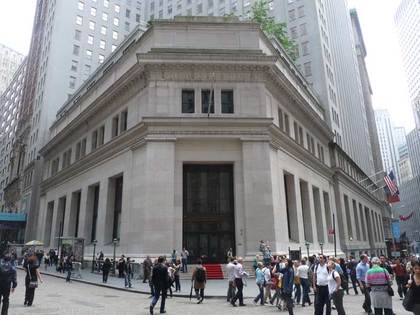 On September 16, 1920, person or persons unknown exploded a bomb in front of 23 Wall Street, then as now the offices of J.P. Morgan Inc., causing 400 injuries, some of them horrific, and 33 deaths.

When 23 Wall Street was constructed in 1913-1914, the Morgan name was so well-known that it was considered unnecessary to mark the building with his name, and it continues to be unmarked today... except in one respect. The exterior of 23 Wall Street is weirdly pockmarked on the Wall Street side. These marks were put there by the bombs that exploded on September 16, 1920. Morgan, Inc. has never repaired the building facade.

According to historian William Bryk in the March 6th edition of The New York Press, a single warning had come in the form of a note placed in a mailbox at Cedar Street and Broadway just before the blast:

“Remember we will not tolerate any longer. Free the political prisoners or it will be sure death for all of you. American Anarchists Fighters.”

Before the Morgan Bank was built here, at this corner was Downing's Oyster House, a popular restaurant with financiers, politicians and journalists in pre-Civil War days. (Charles Dickens ate here on his visit to New York.) The African-American owner, Thomas Downing, helped slaves escape to freedom as part of the Underground Railroad. He may or may not be the namesake of Downing Street in Greenwich Village.

23 Wall Street has been unoccupied since 2008, when it was purchased by Sam Pa, a Chinese billionaire industrialist.