After Iowa, the political discussions can begin. 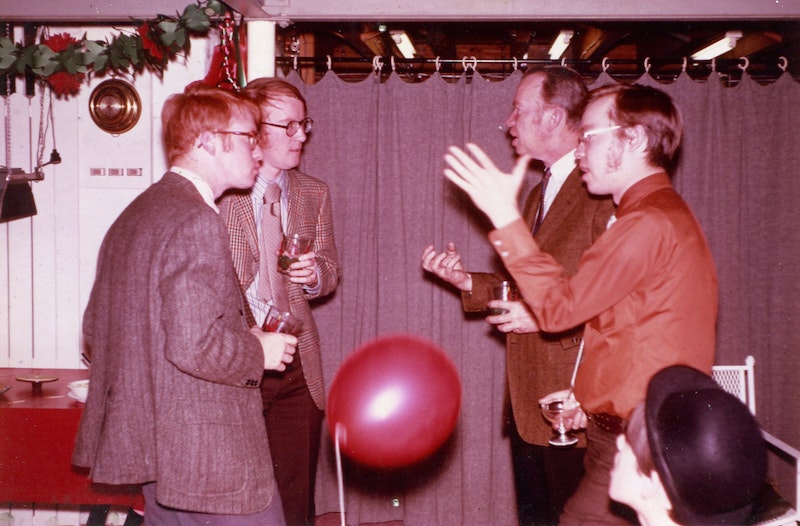 One of my clearest memories as a squirt growing up on Long Island is the continual political debate in our family of seven. In 1960, for example, my brother Doug, then 13, was a volunteer at John F. Kennedy’s Huntington headquarters, putting him in square opposition to my parents and two oldest brothers, who despised the moneybags Massachusetts senator and lined up for Richard Nixon. Same story in 1964, when they were split between LBJ and Barry Goldwater. My mother was a fairly reliable Republican (although unlike my dad, she occasionally went rogue and voted for a Democrat), but right from the start of the Vietnam War—her suspicion of JFK was sky-high—she was a dove. Frankly, I believe this was a maternal gut reaction, since, although firmly anti-Communist, she didn’t want any of her five sons to face possibly lethal conscription. When my brother Jeff was home from Brown University on vacation, he’d yak for hours with Mom about the war—this was ‘64—but she didn’t buy any of his nuanced arguments about the Domino Theory.

The picture above—taken at a 1965 Christmas shindig at my Uncle Joe’s house, with the three oldest boys and dad engaged in conversation, me taking it all in at the bottom right—is reminiscent of countless similar scenes: the adults making firm (if not nasty, like today’s political repartee) points, drinks in hand, and then returning to neutral corners. In fact, if you discount the attire of the four—who wears ties in 2016, especially at a party?—I’ve no doubt that the same sort of family conversations are taking place at homes across America as Monday’s Iowa caucuses finally conclude the endless no-votes-cast-yet speculation about the prospective Republican and Democratic presidential nominees.

My dad, and brothers Jeff and Doug, all gone now, would’ve relished this election, which, as I’ve noted before, is the weirdest of my lifetime, especially considering that unlike 1968 no mass urban riots, assassinations or thousands of body bags toted up have darkened the landscape. All of us thought it odd that movie actor Ronald Reagan was elected governor in ‘66—although it was chalked up to, “There goes goofy California again!—but he wasn’t a patch on Donald Trump.

I’m not embarrassed to admit that politics is a spectator sport that’s highly entertaining, and though this election isn’t working out as I’d hoped—a Rubio/Clinton contest—it’s difficult to imagine that the country will fall apart if Bernie Sanders or Trump prevails. In both those scenarios, I suspect the gridlock in Congress would hit a record-level, and that suits me fine. And, as my son Nicky wrote yesterday, that (mainly) Trump has so distressed the holier-than-thou mainstream media is a pure delight. I didn’t read the entire National Review issue that was (too little, too late) one long and contradictory jeremiad against the Manhattan developer/celebrity/professional boor, and I’ve stopped reading neocon Bill Kristol’s worrywart bleats about the future of the Republican Party. And, hilariously, once again there are countless self-aggrandizing luminaries who are promising to take up lodgings in another country if Trump or Sanders is elected. Just once, I’d like to see that happen: France’s population would’ve mildly surged if all the Hollywood actors made good on their pledge to leave should Ronald Reagan defeat Jimmy Carter in 1980.

And then there’s my go-to pundit, The Washington Post’s Dana Milbank, whose columns read like a reverse “Mrs. Agnew’s Diary” from the earliest issue of National Lampoon. As documented in this space, Milbank’s political journey (as he may put it) in the past nine months has zig-zagged from calling the large GOP field a “clown car” to promising readers Trump was a passing fad to a sober recitation of all of Trump’s sins to a piece this week begging people to abandon Sanders for (in his view) sure-thing Clinton in an effort to stop Trump.

Really, it’s an abomination. Milbank: “I adore Bernie Sanders. I agree with his message of fairness and I share his outrage over inequality and corporate abuses. I think his righteous populism has captured the moment perfectly. I respect the uplifting campaign he has run. I admire his authenticity. And I am convinced Democrats would be insane to nominate him.” I haven’t the foggiest how many young, ardent Sanders supporters read The Post (I doubt they’d fill D.C.’s 9:30 Club) but certainly their message would be, “Fuck you, Principal Milbank!” Once again, writing with the certitude that’s so far failed him, Milbank continues with his pitch for Clinton: “It seems more evident each day that Republicans have lost their collective reason and are beginning to accept the notion that Trump will be their nominee. And I doubt Democrats will make an anti-immigrant bigot the president by nominating a socialist to run against him.”

Reading Milbank is even worse than, as a kid, when peanut butter stuck to the roof of your mouth, or puking up that first six-pack you drank way too quickly. Same territory, though.