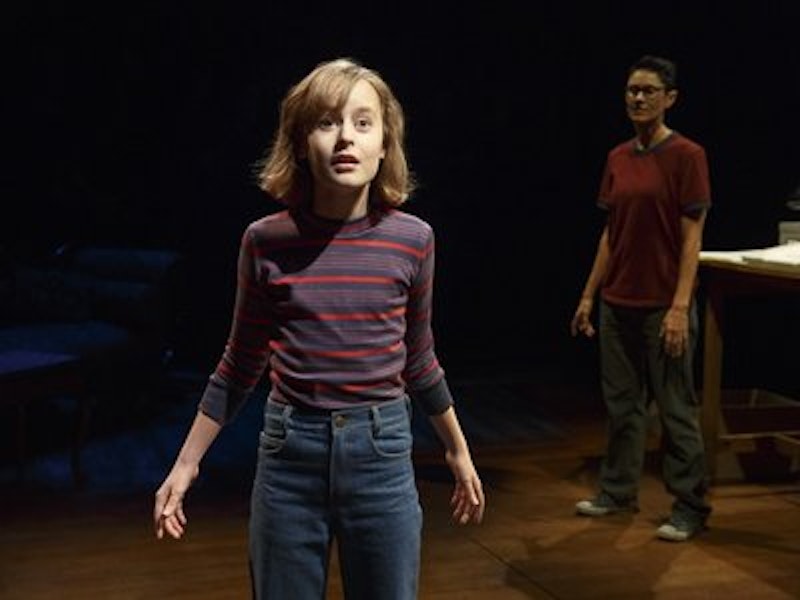 Fun Home was one of the first modern queer stories I read, so when I heard it was coming to Broadway, I was ecstatic and bummed at the same time—a new approach to a beloved story is always welcome in my world, but I was certain I’d never actually get to see it. Broadway prices being what they are, the show might as well be in Tijuana. But thanks to a timely intervention by my dear friend Raven, I saw it—my first Broadway musical—at Circle in the Square last week.

Alison Bechdel’s graphic memoir—about her childhood in a funeral home, her college coming-out experience, and peculiar relationship with her father, a gay man who killed himself while Bechdel was at school—is important to me in a number of ways. The obvious path is, of course, that it’s the story of a queer woman, a story I never thought I’d identify so strongly with as a child but which is now akin to my reality. But it’s also in large part an exploration of loss. Having lost my own father to cancer just over four years ago, the show came at a grimly apropos time for me, and I found myself overcome with emotion at unexpected times that had nothing to do with why I liked the book in the first place.

One of those moments came during “Changing My Major,” in which Emily Skeggs (making her marvelous Broadway debut as Medium Alison) rhapsodizes in 3/4 time about the newfound joys of lesbian love and lust found in bed with her new lover, Joan (Roberta Colindrez). I was especially excited to see Fun Home with Raven, since she was—in a roundabout manner of speaking—my Joan, which hadn’t occurred to me until that night. She and I met online years ago, quite by accident. Even though we weren’t physically intimate until I’d already come out to the most important people in my life, we quickly established an emotional bond that helped me realize many things about myself—most importantly, that I wasn’t a boy with an intense set of fetishes, but a girl with some issues to work through. Like Alison’s Joan, Raven proved to me that it was possible to be a queer (trans) woman without also being a sex object, that my identity wasn’t weird or gross, that I had the right to love every part of myself. Although the song itself is rather comedic, seeing Skeggs dance and cry out in joy with my first trans girl-crush sitting to my left almost brought tears to my eyes.

What did end up making me cry, which came as a shock, was Judy Kuhn’s rendition of “Days and Days.” Kuhn, who theater dorks will recognize as both Cosette and the singing voice of Pocahontas, inhabits the role of Alison’s mother with startling, exhausted sadness. Though my home life was very different from the Bechdels—we had many more dust-gathering piles of books, for one—I have the impression of living in an emotionally similar situation, where conflict is buried but manifests in occasional bursts. So when Kuhn bitterly reprised the lyrics of “Welcome to Our House on Maple Avenue” (”Everything is balanced and serene/Like chaos never happens if it’s never seen”), I felt myself begin to quietly sob and tried not to let my makeup run.

Similarly affecting was Michael Cerveris’ solo “Edges of the World.” Alison’s father Bruce, increasingly withdrawn and manic upon seeing his daughter seize her queer identity in a way he never could, laments the crumbling old house he’s trying to restore. It’s a haunting song in both delivery and staging, as Cerveris staggers about the stage between open trap doors that’ve become yawning black pits threatening to swallow him. I find it more difficult to see myself in male characters these days, but I saw my pre-transition self in that Bruce. I came out because I was terrified of becoming an old or even middle-aged man; like I said in my first trans column for Splice, I’d have ended up like Bruce—a suicide statistic. As Cerveris finished the song staring into the headlights of the truck that killed him shrieking, “Why am I standing here?” I was instantly terrified, and might have broken down right then if the scene hadn’t immediately shifted.

Seeing this side of Fun Home was a radical departure from how I experienced it while reading as a TA for my professor’s class on comics. Then, I could sink completely into Bechdel’s marvelous literary/scholarly analysis of her own life and that of her father’s, drawing dispassionate parallels to my own experiences at the time, quietly compartmentalizing my father’s death. Now, with fewer excuses to analyze panel structure and page layout, I’ve been forced to feel everything that was lying underneath the surface. Hormone replacement therapy sends you through a second puberty and makes you more prone to emotional volatility, but it’s only by welcoming that emotion into your life that you get a sense of who you were always waiting to be. I think that’s true even if you aren’t trans, but especially if you are or fall somewhere on the LGBTQIA spectrum. Every queer kid needs access to Fun Home, because all of us need permission to feel authentically—and this show is a great place to start.