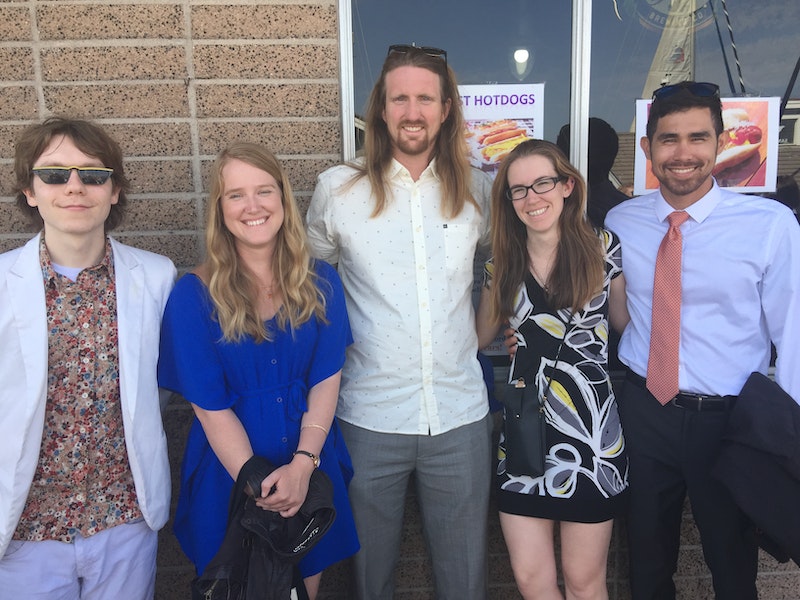 Last Friday, July 6th, was “a snow-globe kind of summer day” in Santa Barbara—lifting that description, in starkly different context, from Emily Fridlund’s nutty but compelling 2017 novel History of Wolves—as my son Nicky and I wandered up and down State St., sun beating down, palm trees surrounding us, just dawdling before the wedding of my sister-in-law Mary and Joel Ungar (picture below). It was joyous event, as Mary, whom I’ve known since 1963, and is the widow of my late, one-in-a-million brother Jeff, who died in 2012, has forged a new and exciting life. Jeff would have a Pepsodent smile—and who knows, maybe he does!—knowing that his wife of so many years has discovered a new happiness. More on the Western-themed wingding in a bit, but first a few digressions.

I’ve feuded with United Airlines since 1986, upon being stranded in Chicago for 12 hours—and this was when flying wasn’t such an onerous ordeal—and the representatives of the company at O’Hare gave me the backs of their hands. Scumbags. I’ve tried to avoid United ever since, but in this era of ever-worse Hostile Skies, it’s often impossible. Remarkably, Nicky and I (unfortunately, my wife Melissa and younger son Booker were both ill and unable to accompany us to the family affair, slipping in my numero uno Sly and the Family Stone song), whizzed through the four Baltimore/Santa Barbara to-and-fro flights without a hitch, which is a record for me during this curious century.

I’m not promiscuous in recommending hotels or restaurants, but the Santa Barbara Inn, hard by the Pacific Coast, is one of the best hotels I’ve laid down cash for on the West Coast, save the Four Seasons in Seattle. Coffee laid out at 5 a.m., extraordinarily accommodating service, and spacious rooms.

Anyhow, back to the long stretch of State St., which, in all honesty, except for the Spanish architecture and local vegetation, is, crowded with chain outlets like Abercrombie & Fitch, Urban Outfitters, Skechers, Starbucks and every bank known to Americans isn’t all that distinguished. Nevertheless, an acorn was found by the Detectives Smith, in the form of No Name Records, an independent shop that bore resemblance to the still-breathing Generation Records in Lower Manhattan, crowded with boxes of used and favorably-priced vinyl, DVDs and CDs, including scads of legal bootlegs. If my office wasn’t spilling over with boots, I would’ve had a field day—but felt no need to spend $12.99 for a single live Dylan song from a ’64 concert that I don’t own—but Nick went to town, picking up LPs by Patsy Cline, Sparks, Josie Cotton, Barry Galbraith and Wendy Carlos, among others.

And although the generic landscape of the United States is a hobbyhorse of mine—and about 25 million others who remember life before Amazon—while I was waiting for my son to complete his scavenger hunt, I sat outside on a bench, smoked a cigarette (drawing a catcall from a motorist, who, if he had the time, probably contemplated making a citizen’s arrest), and saw the craziest assortment of tourists, residents and rough-looking dudes. There was one guy, loaded down with a heavy backpack and carrying a skateboard, with a weather-beaten face that screamed he was living rough. Looked to be about my age, but the elaborate, and really ugly tats on his exposed legs testified to a man in his 40s, and that’s in the spirit of generosity.

Something I’ll never understand in a town or city that’s awash with food options peculiar to that specific locale—like pizza in the New York metro area, fried clams and lobster in New England, ribs in Macon, etc.—is that some people, who apparently lost their tastebuds or imagination along the way, will patronize chain establishments. In Santa Barbara, for instance, despite a large number of excellent Mexican restaurants, you’ll see tourists at the trough of a place they’re familiar with, eating salsa that’s dumped into bowls from jars of Tostitos and that guacamole sold at supermarkets across the country that has the consistency of baby food.

I canvassed two cabbies and a concierge about the best Mexican restaurant in town, came up three choices, and settled on Los Agaves, a threadbare storefront where you order food at the counter, pay the tab and settle at a table. I haven’t tasted better soft tacos, guacamole or nachos (which can be made artfully) since, well, the last time I was in San Francisco and Santa Barbara three years ago. And not even a sliver of attitude from the two different employees who set the grub on the table, and were lickety-split on re-filling our water glasses.

I do get carried away, so let’s cut to the main events. Mary and Joel were formally hitched at the town’s courthouse, a snazzy location that’s decorated with historical murals. The service was mercifully short, though not without some touching words from the bride and groom, and then the assembled gathered outside for transportation to the marina, where we hopped aboard the Channel Cat Catamaran for a bracing three-hour cruise. (Just before getting on the boat, I snapped the above photo of Nicky, my nieces Xela and Kira Smith, accompanied by their beaus Christopher Cummings and Jere Rutter, respectively.) Glasses were clinked as numerous toasts were offered, and I spent time gabbing with my niece Bronwen and nephew Caleb, as well as catching up on Chris Sale’s dominant performance, via cell, with Andy Jaye (my niece Zoe’s husband) and Red Sox-mad son Derek. We did so somewhat furtively, but it worked out.

What wasn’t so pleasant—but fascinating in a bizarre-weather experience—was the instantaneous emergence of oven-hot Santa Ana winds about an hour before we docked. Just 15 minutes previously, I was having a smoke outside, with a pleasant breeze at my back when all this dust kicked up. I like the moderate temperatures in Southern California, but would never live there, due to the wildfires, mudslides and earthquakes, which are for the birds.

On Saturday, the whole crew was transported an hour away to the Alisal Ranch in Santa Ynez, where an elaborate barbecue, country band that never tired and hay wagon ride up the hill were on offer. Nuts, I thought to myself, I forgot to pack my cowboy boots, spurs and 10-gallon hat and so looked like an Easterner wearing chinos, polo shirt and sneakers. Joking! I’m not much for line-dancing and all that goes along with it, so instead kept up a steady patter with my brothers, nephew Rhys and his wife Rachel, niece Jenny and her family, and once again huddled with Andy and Derek about that day’s Sox game. In truth, back in 1974 I did have a pair of hand-made off-orange cowboy boots made in Texas, and cowboy hat from Santa Fe, and while I fit in fine in Denver and Wyoming in ’76, back in Baltimore I was considered a freak on the litter-strewn streets. But better a guy with a perhaps peculiar style than a drone sleep-walking through the day.

Nicky and I returned from the hoedown just after 11 and hit the hay immediately, as we had a four a.m. wake-up call to make a flight back home that departed just after dawn. That unambiguously blew, but was a small price to pay to see Mary’s radiant smile and getting together once again with my large extended family. 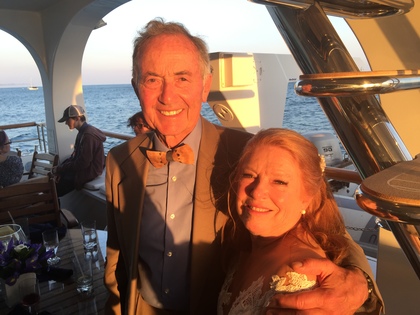