Get in My Woodlawn

A sliver of the Bronx. 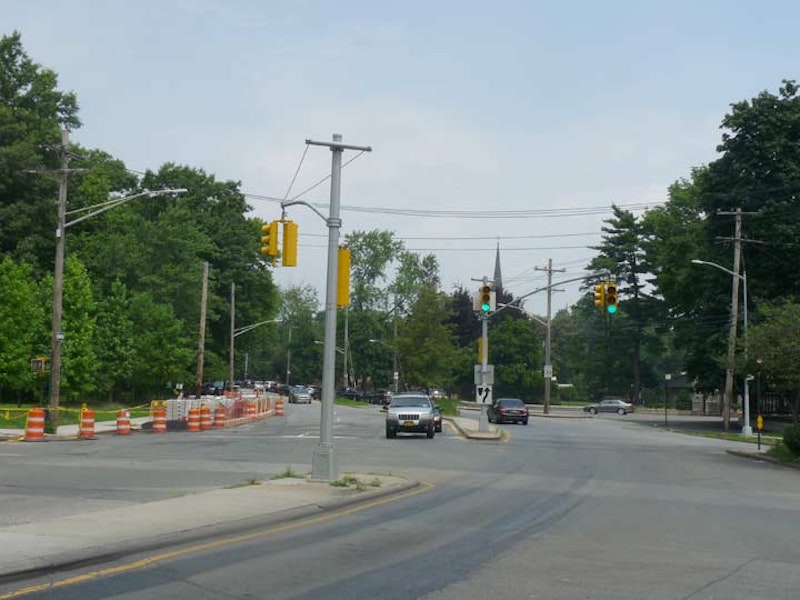 On the July 4th, I braved a sore back and the unlivable heat for a brief stroll around Woodlawn (the neighborhood, not the cemetery, though I did go past it). It’s a sliver of the Bronx wedged between Van Cortlandt Park, Woodlawn Cemetery, the Bronx River Parkway, and the undefended border of the Bronx and Yonkers. It’s an extraordinarily insular area, and in the past, a fellow shuffling about taking pictures has not been treated altogether kindly. Today, however, the residents were peaceable (on the holiday, not many were in evidence, anyhow). Locals call their neighborhood Woodlawn, while outsiders have it as Woodlawn Heights.

The above photo shows the beginning of the longest un-shrouded stretch of Jerome Ave., which was named for financier/racetrack owner/grandfather of Winston Churchill, Leonard Jerome (who’s nonetheless buried in Green-Wood Cemetery in Brooklyn, not Woodlawn). Like 5th Ave. in Manhattan, Jerome Ave. serves to divide East and West numbered streets in the Bronx. In 1917, the elevated train, a northern extension of the Lexington Ave. line in Manhattan serving the #4 train, covered the majority of the lengthy avenue, which runs from the Macombs Dam Bridge across the Harlem River up to the Major Deegan Expressway at E. 233rd St. 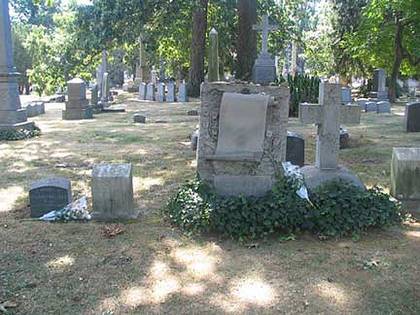 The main gate of Woodlawn Cemetery is located here on Jerome Ave. where it meets Bainbridge. Woodlawn Cemetery is probably third on the pecking order of New York City cemeteries after downtown Trinity Cemetery and Green-Wood if you measure their worth by the celebrities interred therein.

The cemetery’s star power is staggering. Here you’ll find Herman Melville, who died in humble circumstances unaware of the resonance his fiction would acquire after his death; railroad tycoon and hotelier Austin Corbin, responsible in large part for the importance of the Long Island Rail Road; investigative reporter Nellie Bly (Elizabeth Cochrane), who blew open the doors to abuses in mental hospitals and prisons; Joseph Pulitzer, publisher of the New York World and a founding father of crusading journalism; Ruth Snyder, whose execution in the electric chair for murder in 1925 was secretly photographed and appeared on the cover of New York’s Daily News under the headline “Dead!”; Frank Woolworth, whose stores dominated the five and dime business for decades; Robert Moses, whose ambitious programs over five decades redrew the map of New York City; Fiorello LaGuardia, the “Little Flower” whose mayoral regime was transformative; jazzmen Duke Ellington and Miles Davis; and many others are all permanent residents of Woodlawn.

Unlike Green-Wood, which has always welcomed freelance tour guides (such as myself), Woodlawn insists that their own guides handle everything, and photography has always been more problematic than at Green-Wood. A few years ago, I did squeeze off some photos in the large “burial park” unaccosted. 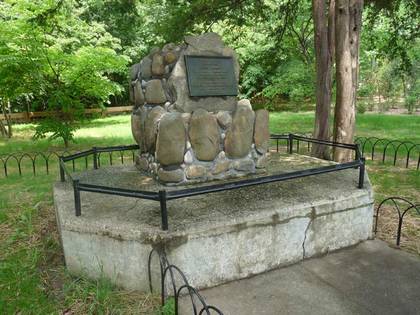 On August 31, 1778, 17 Mohican Indians, led by Chief Abraham Nimham and fighting on the side of the patriots, were massacred after their defeat by Colonel Simcoe and his Queens Rangers, fighting for the Crown. The Indians are commemorated at Indian Field in Van Cortlandt Park on E. 233rd St. east of Jerome Ave. The Mohicans, all from Stockbridge, Massachusetts, had tracked the British through the Bronx but were finally met by an overwhelming force of British and Hessian troops. This battle, on land owned by the Devoe family, was the only one in the Revolutionary War that occurred completely within what would become Van Cortlandt Park.

The Mohicans were buried in Indian Field by the Devoes and their gravesite is marked by a plaque and a cairn, a stone mound used in Scottish burials, at Van Cortlandt Park East and E. 238th Str. Chief Nimham was also commemorated by tiny Nindham Place in Kingsbridge Heights, but that street has since been demapped. 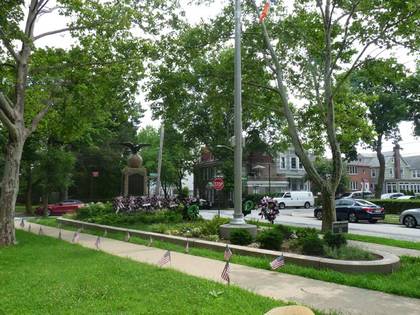 In a city filled with World War I monuments, one of the most distinctive is just across Van Cortlandt Park South in the triangle formed by E. 238th and Oneida Ave. It consists of a concrete sphere on which sits a sculpture of an American bald eagle, all balanced on a stand containing plaques of Woodlawn Heights soldiers who gave up their lives in the “Great War.” One of them, Private Howard Buse, was killed in the United States, as he was standing guard on the Mill Rift railroad bridge over the Delaware River near Port Jervis and was struck by a train.

Chief Nimham and his group were not Oneida Indians; it’s thought that the name commemorates the gunboat that Admiral David Farragut (who is buried in Woodlawn Cemetery) commanded at the Battle of New Orleans during the Civil War. 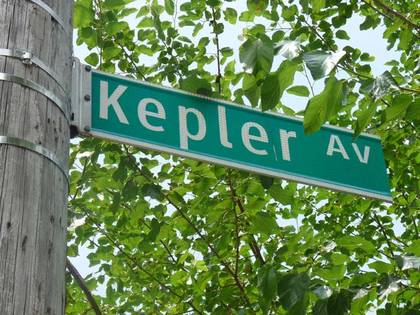 Though a number of streets in Heartland Village, Staten Island, were named for astronauts, Kepler Ave. here in Woodlawn Heights is named for an astronomer,  Johannes Kepler of Germany (1571-1630). Among his chief discoveries was that planets in the solar system move around the sun in elliptical orbits, and his findings laid the groundwork for the findings of the great British physicist, Isaac Newton. The late Bronx historian John McNamara, in his epic History in Asphalt, is unsure of why this far-flung Bronx outpost was given Kepler’s name, but does say that the avenues in Woodlawn Heights received their present names in 1896. 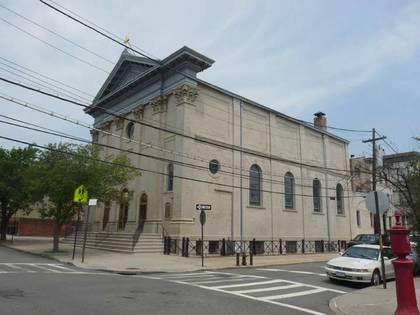 “Barnabas” is a big name in the Bronx. There’s St. Barnabas Hospital on 3rd Ave. in the Belmont section, and here’s St. Barnabas Roman Catholic Church on Martha Ave. and E. 241st. The Roman Catholic parish of St. Barnabas was established in 1910 and while the church itself, dedicated in 1911, is technically in the Bronx, the parish straddles two cities, New York and Yonkers. The corner of Martha Ave. and E. 241st St. is named for the longtime pastor, Father John Considine, who served from 1965 to 1986. Like many Catholic parishes around NYC, a small town sprung up around the church consisting of a grade school, parish house, a rectory and cenacle. 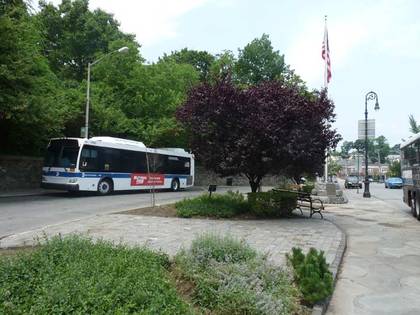 There’s an unusual space at Katonah Ave. and E. 242nd just before the Bronx-Westchester line where the Bx 31, Bx 34 and Bx Manhattan Express #4 buses turn around. MTA bus lines don’t enter Westchester County (though the Bee Line in Westchester enters the undefended border with no trouble.)

Here we also find an unusual memorial installed by the Department of Environmental Protection in honor of the tunnel workers and sandhogs who lost their lives in the construction of Tunnel #3, a major water conduit to NYC that began construction in 1970 and will be finished around 2020. There is also a callout to Monsignor Considine of St. Barnabas Church. Manhole covers are stamped with the names of sandhogs who lost their lives during construction.

A few blocks south on Katonah Ave. you’ll find the headquarters of  Local 147 Tunnelworkers, whose numbers include many Irish immigrants. 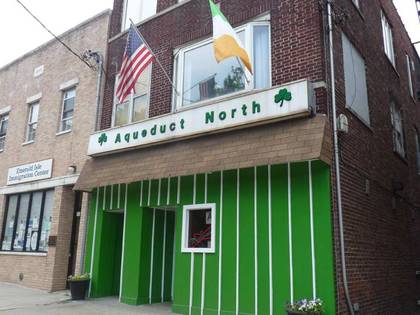 According to the New York Times in 2011, 44 percent of Woodlawn’s population was of Irish extraction. A look at the businesses along Katonah Ave. bears this out, with even the deli awning signs bearing Irish symbols. Woodlawn has been Irish since the 1840s, when Irish immigrants fleeing the potato famine joined gangs building the Croton Aqueduct from several miles north down to the former reservoir where Bryant Park sits now. Woodlawn’s Irish population is always prominent, but ebbs and flows in association with Ireland’s economic situation: when it was flying high in the 1990s, it decreased here but when it guttered in the 2000s, more Irish arrived.

Pubs, almost all of which display the Irish tricolor in addition to the Stars and Stripes, come thick and fast along Katonah Ave. The most well-known of them is likely the Rambling House, which has played host to Irish-American City Council president Christine Quinn, as well as Mayor Bloomberg, when they visited the area. Another, Behan’s, is named for Brendan Behan (1923-1964), a poet, writer, novelist, playwright, and Irish Republican Army supporter. He spent time in Hollesley Bay Borstal, Suffolk, England (a youth detention center), inspiring his 1958 autobiography, Borstal Boy. He was fluent in Irish and composed several plays in that language. Unfortunately, alcoholism claimed his life at 41.

The name of Aqueduct North is likely a nod to the new tunnel, but also the Croton Aqueduct, which is found underground in Van Cortlandt Park. 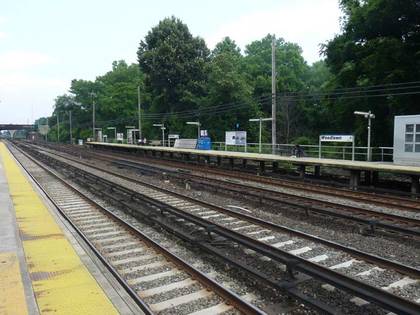 Instead of treating myself to a Carvel, I sprung for a $6.75 ride back to Grand Central via the Metro-North railroad at Woodlawn. Unlike many Long Island Rail Road stations, some Metro-North stations are still equipped with fluorescent lighting and haven’t been upgraded much over the past few decades. I was back in town in 20 minutes, which beats the alternative #2 train on White Plains Rd. or the #4 (which I used to get here) on Jerome Ave.