I don’t scream for ice cream. 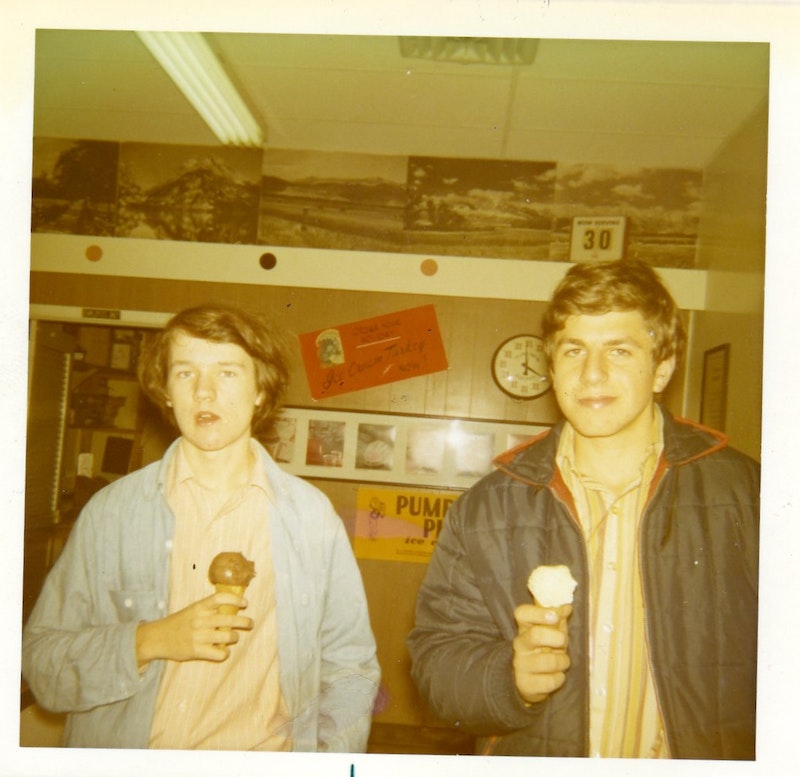 It’s ridiculously inconsequential, and doesn’t compete with the advertorial Forbes ran on Baltimore as a “cool” city to visit, mostly a hummer for Kevin Plank and Under Armour (most cities have “cool” aspects, with perhaps the exception of Newark), but I can’t remember the last time I ate ice cream. In the 1971 photo above, I’m at a Baskin-Robbins with high school buddy Bobby Ringler in downtown Huntington, New York, both of us 16 and in 11th grade. It’s unlikely, I suppose, that was the last Rocky Road cone I consumed, but it was somewhere in that timeline.

I’ve never had a Dove Bar, which as one recalls, was very popular in the 1980s because it was “sinfully rich,” especially for “chocoholics” and though the owners’ hypocritical politics wouldn’t have deterred me, Ben & Jerry’s ice cream has never dribbled down this chin. It’s not for de-activated sweet tooth, since every night I eat pineapple, which is loaded with sugar (but not the taxable kind) and various fruits. And, at this point, at 62, my digestive system doesn’t react well to cream, butter, mayo, milk, corned beef and, most regrettably, almost all cheeses. So if I revisited my pre-teen forays to the Woolworth’s counter in Huntington with my mom, and had a banana split (never got the banana part, but I love the whipped cream, nuts, and two flavors of ice cream), two to one I’d make a visit to the john 15 minutes later.

Yet, unlike, say, savoring wedges of Stilton or chunks of Parmesan at an Italian restaurant, which I might be able to handle after a head-to-toe purge of every single toxin in my aging body, the desire for ice cream isn’t there. It’s not because of the calories, which are abundant, since my weight isn’t an issue; I just gag at the thought (apparently unlike piggy Donald Trump, who lords his extra scoop of ice cream over his dining companions) of soft vanilla or hazelnut ice cream, drizzled with caramel or chocolate sauce.

Like a lot of kids who grew up in the 1960s, I ate a lot of ice cream. It started as a tot, when one of my first memories was hearing the jingle-jangle of the Good Humor truck lumbering up LaRue Drive and all the neighborhood kids, and some parents, scooting swiftly out to the curb to wait for the guy to come around. (One of my brothers had a summer job as a Good Humor vendor, and he hated it, from the uniform to the dogs chasing his vehicle.) I favored the Chocolate Éclair bar, which went for a dime; my parents were suckers for the Toasted Almond. When my pockets were less flush there was always the nickel Italian Ice, or another kind of fruit pop, and that was almost as satisfying.

Not surprisingly, in a family of seven our freezer usually had a carton or two of off-brand ice cream—on very rare occasions, when on sale, my mother would spring for a tub of Brayers, which was the Cadillac of ice creams back then—and it was great: chocolate swirl and chocolate mint were my favorites, far better than the bogus Neapolitan, or boring old vanilla. My dad was a hearty ice cream enthusiast, and after dinner he’d have a big bowl while watching the tube with my mom, sometimes dozing off mid-bite.

There were perils to the ice cream at home: some cartons, neglected, developed freezer burn, and you had to scrape the bad parts off, just like an overripe peach. And if, during a thunderstorm, the power went off, the ice cream turned all soupy, inedible really, but never tossed, since my mother jammed the refrigerator so aggressively that if one of the kids, playing scientist, ventured to the bowels of the appliance, he’d be assaulted by rotten olive loaf or Velveeta cheese that had turned to a moldy crust.

My favorite ice cream as a kid, always in a cone, was Howard Johnson’s Peppermint Stick, which I’d sometimes get after our family finished an all-you-can-eat fried clam dinner. (They weren’t the real deal—New England’s Ipswich clams had that honor—but still pretty great, even the frozen boxes that as a teenager I’d broil crispy and smother with lemon juice.) And there was, as New Yorkers remember, the old-fashioned Carvel stands, where you could purchase soft ice cream, a novelty back then. I soured on Carvel once they expanded into strip malls and added items like very bad ice cream cakes. And in high school, at a Friendly’s down the street from “The Big H” mini-mall, there was usually a pal working—always a girl—and our crowd would congregate there before an evening out. I had the Friendly’s version of Peppermint Stick there as well, although it didn’t match HoJo’s.

After that, my ice cream days are a blur, mostly because there were so few. In college, I worked as a parking lot attendant at the Johns Hopkins Faculty Club, and included in the salary was a free dinner, eaten downstairs with the help (all black women by the way; it was the mid-'70s in de facto segregated Baltimore, all very William Zantzinger). Anyway, my roommate and I—we shared the job—would often invite friends to our dining dump, and we’d snoop around, work the tap beer, and get some ice cream for them. I abstained; though not on the National Premium draft in very cool seven ounce glasses.

It’s possible, when I became a parent in the 1990s, that I might’ve taken a lick from one of the boys’ cones, but I don’t think so. I would, against my better instincts, abscond with several of their fries, and maybe even have a Big Mac myself, with the sickly sweet “special sauce” than now makes me feel a bit ill.