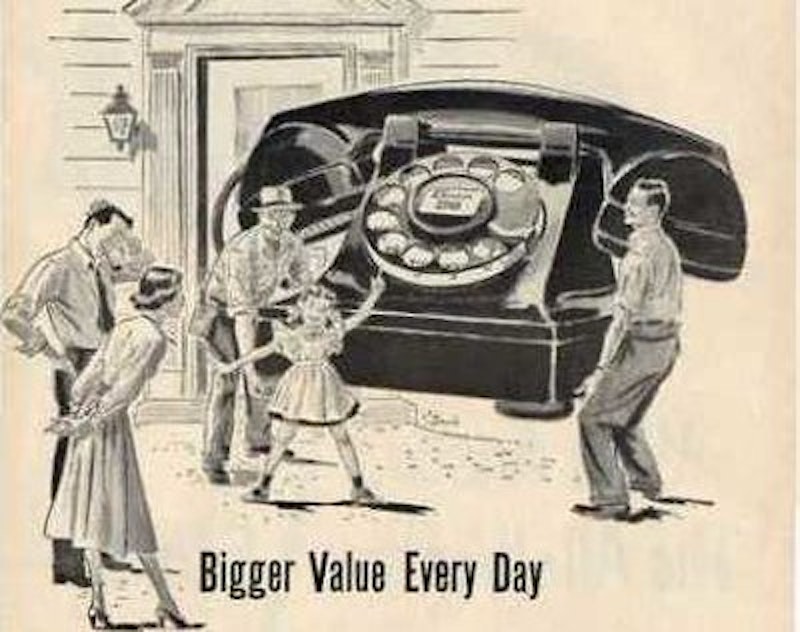 The story goes that about 50 years ago my father and the family were playing cards in their country cottage when a man burst in screaming that his buddy was dead in a ditch outside. As a result, today it’s difficult to get Internet service set up there.

What happened was this: In the mid-1960s my family built a cottage in my grandmother’s home town, south of Montreal and just north of the Vermont border. It was a small house. Water came from an open spring nearby. There was no telephone. In that situation, in that place, at that time, a phone didn’t seem to be a necessity.

One Saturday night my grandparents, father, and some aunts and uncles were playing cards, as they regularly did—poker variants, a nickel to ante: Midnight Baseball, Daylight Baseball, Kings and Low in the Hole, Queens Down and Follow the Queen, Spit in the Ocean. When the night was well on there was a pounding at the door, and when they opened it a panicked man blurted out that his friend was dead outside.

Somebody took the guy over to the neighbor’s house to use the phone, while my father and uncles got some blankets and went out to see if they could find the alleged corpse. They did, and discovered he was alive, if asleep. It turned out that the man had left a bar in the nearest town, and, alertly deciding that he was in no shape to drive home, set out on foot. He made it just about to my family’s house and then, tired, lay down in the ditch to rest, where he fell asleep and where his friend found him a little later.

All’s well that ends well. But it led my grandparents to decide that it might be a good idea to get a phone at the cottage after all. Just in case the next dead guy really was dead. So they did, and since it was fifty years ago it was a landline. Only not exactly the kind of landline old people like me are still used to.

Fifty miles from a major city, the only kind of phone line available at the time was a party line. I expect people under 40 may not know the term as it applies to telephony. I don’t think I’ve ever used another one myself, and can’t even think of a time I’ve seen one in an old movie or TV show. A party line’s a phone line that doesn’t just run to one household. Instead it connects several numbers, each of which has the line in common. Each hears the phone ring when a call comes in to any of them. Each household gets a separate ring; calls for a house might be signaled by one long ring and two short ones, the next house two longs and one short, and so forth. Of course, in the rotary-dial days of 50 years ago all phones rang, instead of vibrating or playing music. But if you picked up the phone and somebody else in another home was already on the line, you couldn’t use it—just eavesdrop.

In the 1980s, well after the house had been extended and a well dug, the phone company did something to their lines so that the party line acted like a regular one. We no longer heard the occasional mysterious ring, no longer had to worry about picking up the phone to hear unknown people or worry about them hearing us. We soon forgot, in fact, we were on a party line at all.

Which brings us to the present day, and my aunt, the current inhabitant of the cottage, trying to get DSL Internet set up. As of this moment, it’s an ongoing process because the old infrastructure is still giving us problems.

First, a party line can’t carry Internet signals. Bell Canada promised that wouldn’t be a problem; somewhere in the last few decades they’d set up a regular landline in the area, and they could switch it over. It’d take some time, but they could do it.

And so they did. Even after that, though, Bell’s proved oddly mulish. My aunt’s getting Internet through another company, Teksavvy, which uses Bell’s lines. But Bell keeps telling them that my aunt doesn’t live at her address—the same address to which Bell sends their bills.

Bell’s front end, the billing services, has her correct address in their files. Their back end, the technical services, have another. The bad address has the right street, but the wrong number for the house. It’s an address we don’t know, that my aunt has never lived at, nor did my grandfather who had the account before her. An address, in fact, that as far as we know nobody in our family’s ever lived at.

I can’t be positive, but strongly suspect the address was associated with the party line. I think Bell’s technical services, for arcane reasons, put that number in their file for the cottage’s account because the line serving the house didn’t belong to the house alone. It’s a guess, but neither of us can think of any reason for Bell to have that false address—and specifically for Bell’s technical support side to have it.

What we’re facing, in other words, is the difficulty of a technological upgrade. Old infrastructure doesn’t always go away easily. It can be replaced or superseded, but ghosts of it remain in the new systems, bugs and errors and glitches waiting to happen. Eventually they become harder to root out because nobody remembers the old structures that birthed them. Nobody’s been around long enough to see the evolution of the whole. Institutional memory’s lost.

How many of the people at Bell trying to deal with us know what a party line was or how it worked? Some, sure; at least one guy at tech support knew about it (and said my theory that the party line caused the bad address is quite possible). But I wonder how many party lines are still part of the overall network.

On the other hand, imagine it the other way around. Imagine trying to explain to the phone company five decades ago that 50 years later the party line would make it difficult to set up a connection to the global computer network that everyone uses to check their mail, keep up with their friends, get the news, listen to music, watch movies, and shop. They’d rightly call it science fiction, and point out that they couldn’t afford to think too far ahead. The party line was Hobson’s choice: this, or nothing.

The best technology available for the house has become archaic 50 years later, and more than that, it’s become a barrier to setting up the technology of today. I’ve read a number of articles about how various places in Africa are skipping over the installation of landlines in favor of cell phones. They’ve got it right. The less you install the less you need to update. Sure, at least software can update itself. But human error’s a constant. There’s no updating the wetware.