Take a ride to the 4th Avenue station. 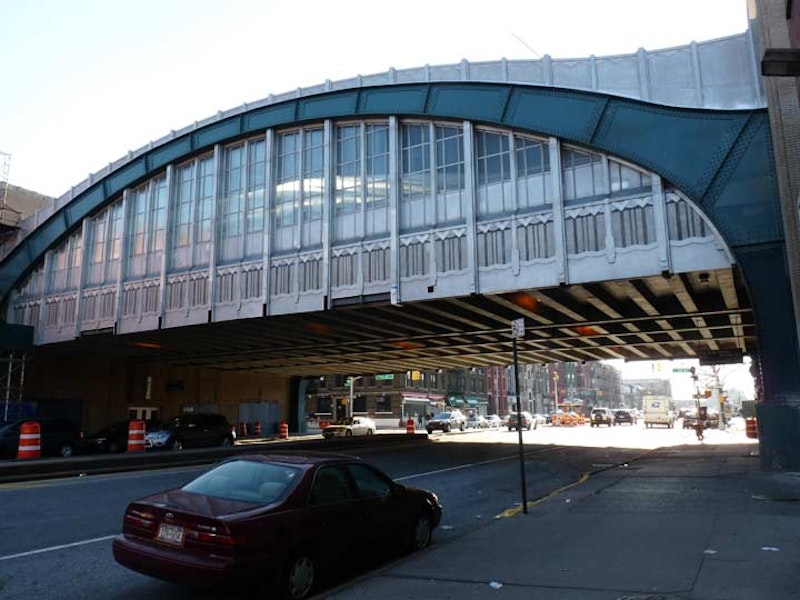 In the 1920s, New York City began to build its Independent Subway, which originally was meant to compete for business with the Interborough Rapid Transit (which we now know as the subway lines that are numbered) and Brooklyn-Manhattan Transit, which today comprises, for the most part, the J, M, N, and R lines. The IND, as it came to be known, was built on two trunk lines in Manhattan on 6th and 8th Avenues, and forayed into the Bronx on the Grand Councourse, Queens on Queens Boulevard, and Brooklyn as far as Park Slope, where it originally ran as far as Church Avenue. Today’s A through G lines mostly run on tracks built for the Independent.

In 1940, the city purchased the IRT and BMT and “unified” the subway with the IND. Many more free transfers between lines were instituted, but it wasn’t really until two key connections between the BMT and IND were made at the Manhattan Bridge and in the East River tunnels in the 1960s that trains from the two old rivals could truly intermingle. Though there are plenty of free transfers to the IRT, because the cars and tunnels are narrower on the IRT (which was the “original” subway going back to 1904) there is no such intermingling of IRT cars on former BMT and IND lines to this day. True integration has never been accomplished.

The IND built just two elevated stations in Brooklyn in 1933, the tallest station in the system, Smith/9th (tall enough to let tall masted ships on the Gowanus Canal) to pass beneath it; and the Fourth Avenue station, lower because it is built just west of a tunnel entrance. There had been plans for the IND to build an elevated station that would connect the Roosevelt Avenue station in Queens with the Rockaways which would have been elevated in Glendale and Ridgewood, but the Depression and World War II canceled those plans; in 1956, the Transit Authority reached the Rockaways anyway by rehabbing a Long Island Rail Road trestle over Jamaica Bay that had burned in 1950, and then extending the A train over the former Fulton Street Elevated to meet it.

At the Fourth Avenue IND elevated station (opened July 1, 1933), the tracks are close to the ground, but still high enough to require bridging over the avenue. Engineers came up with a beautiful arch bridge with Art Deco accents. For the first few decades of its existence, the windows on the platforms were clear and allowed a view north to the Williamsburg Building and south toward Bay Ridge.

The windows on the arch bridge had been painted brown for many years, since at least the 1970s; I remember grime-caked windows you could see through as late as the Sixties. The MTA was tired of vandals graffiting and breaking them, so the agency just painted them opaque. Now and then, though, the paint flaked off and permitted a view.

For much of the last decade now the MTA has been rehabilitating the windows and has actually finished with the eastern set, but has installed an opaque covering on the windows, apparently so no one will think about breaking them. I’m not sure when, or if, the western set will reopen, and that set of windows remains covered by plywood. 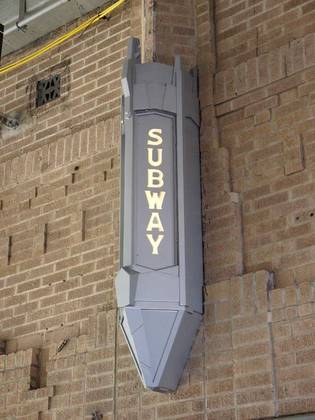 Three of the original Art Deco-influenced pencil-shaped entrance signs remained in place through years of neglect, and were rehabilitated along with the rest of the station. Details on the arched bridge, as well as the brick viaduct between 3rd and 4th Avenues, also reflect Art Deco design elements.

If you’re not familiar with this area of Brooklyn, it may be a bit hard to believe, but the IND at this point quickly dives back underground, where it stays until it connects with the older Culver Line at Ditmas Avenue. The reason is geography: the land slopes sharply upward here (the Slope in Park Slope).

Why elevate two stations in the first place? It was considered more architecturally sound to elevate the subway over the then-busy Gowanus Canal rather than tunnel under it. As a product of that construction, the Smith-9th St. station is the highest elevated station in NYC, rising more than 87 feet above the street. It takes two escalators to get up and down. 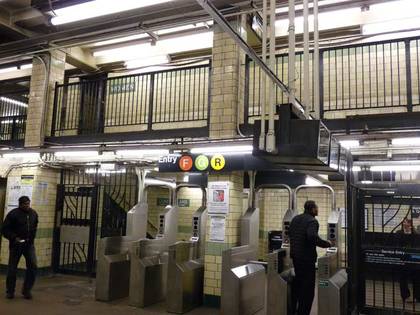 Heading in, 4th Avenue reflects the overall IND design formula: off-white glazed brick tiling with simple color tile informational and directional signage. A little-known IND design element held that all IND stations between express stations were tiled the same color, with the color changing at an express station. This rule holds true even here on this elevated stretch, as the Bergen, Carroll, Smith-9th, and Fourth Avenue stations are all tiled in light green. The color changes to yellow at the “express” center-platformed 7th Avenue station, with following stations all tiled yellow until the “express” Church Avenue station, which is maroon. I’ve placed “express” in quotation marks because the F and G lines, which run here, feature no express service and haven’t, with the exception of local platforms being closed for trackwork, for decades. At present, the express tracks on the Culver Viaduct, to which this line connects, are in use while the Metropolitan Transit Authority rehabs several stations. 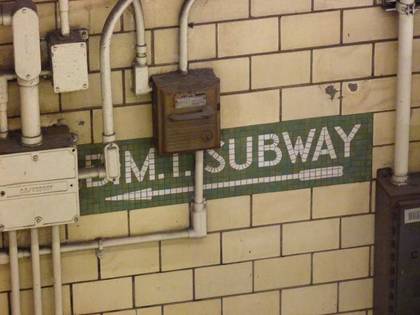 Prior to the subway unification in 1940, there were free transfers between the IND and ORT/BMT, but they were doled out sparingly. As this original tiling indicates, there has been a free transfer to the BMT 4th Avenue Line, the R train, since the station opened. The 4th Avenue Line, Brooklyn’s first subway, opened in 1915 and connected to the Manhattan Bridge, but ran to the Chambers Street station. The tracks were only later connected to the Broadway BMT. 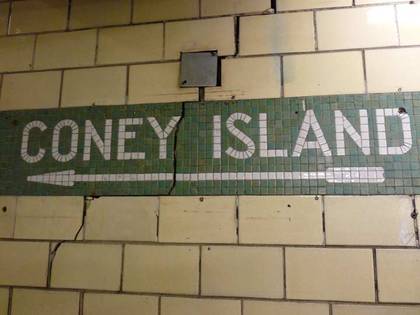 The presence of a “Coney Island” tile sign, pointing to the southbound platform, at the 4th Avenue IND is a puzzlement. In 1933, when the station was built, the end of the line was at Church Avenue, and the line was only connected to the Culver Viaduct on McDonald Avenue in 1954. It’s possible that the city planned to build out this line to Coney Island from the jump, and created the signs in anticipation. I do not believe the sign was created in 1954 because by then different sign designs were in use and I don’t think the city would have gone to the trouble to replicate the 1933 signs exactly. 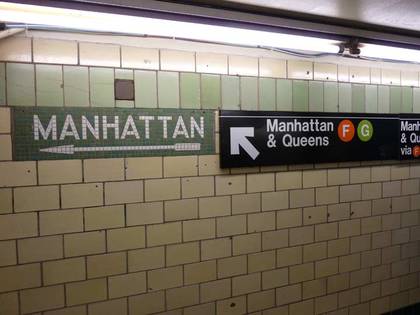 In the 1970s, the MTA hired a design firm called Unimark, and chief designer Massimo Vignelli, to standardize subway signage. After different colors and fonts were used for several years, black signs with white trim and Helvetica type were settled upon, and the MTA has been quite thorough, especially in the last 30 years, in rooting out earlier signage and sign designs, with many beautiful enamel signs in a variety of fonts and colors eliminated. In the IND, in many cases the MTA has left the simply-worded tile signs in place, but placed somewhat redundant modern signs next to them. 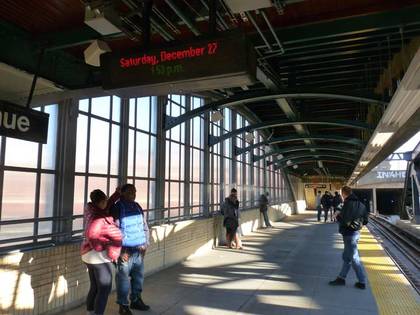 The northbound platform of the station has gotten, thus far, the deluxe treatment with the rehabbed panels. The windows are now glazed polyurethane and aren’t opaque, though they do allow sun rays to streak onto the platform. Combined with the metal “ribs” of the superstructure, the effect is unique in the entire subway system. 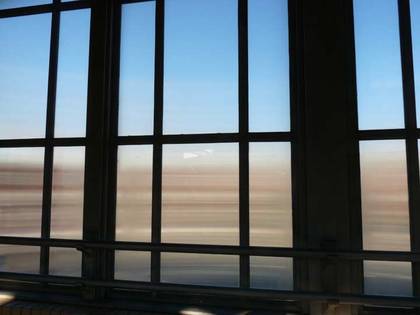 At sunset, the colors are diffused into works of art. 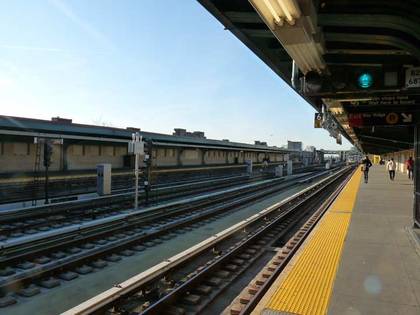 It has to be emphasized that the “panorama” only exists on a short stretch of the northbound platform. The rest of it is a brick wall with filled-in windows, which were also originally glass but the city decided to simply cover them over rather than constanttly replace the glass after angry vandals continued to break them. 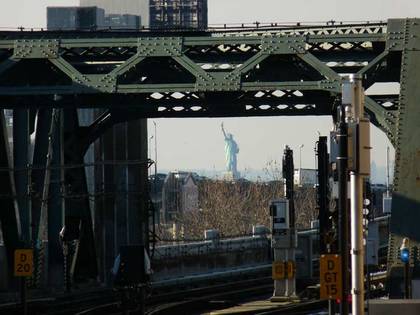 The Statue of Liberty can be clearly glimpsed from the west end of the platform, and through subway windows as it makes the curve on the viaduct west of the Smith-9th Street station. If you use a zoom lens you can obtain a good photo of the station through the ribs of the viaduct that spans 3rd Avenue.

The Fourth Avenue station is one of the subways’ unremarked-upon masterpieces. However, the city does not apparently have the money or the inclination to complete its excellent rehabilitation work to include the southbound set of picture windows over 4th Avenue, and that’s shame.