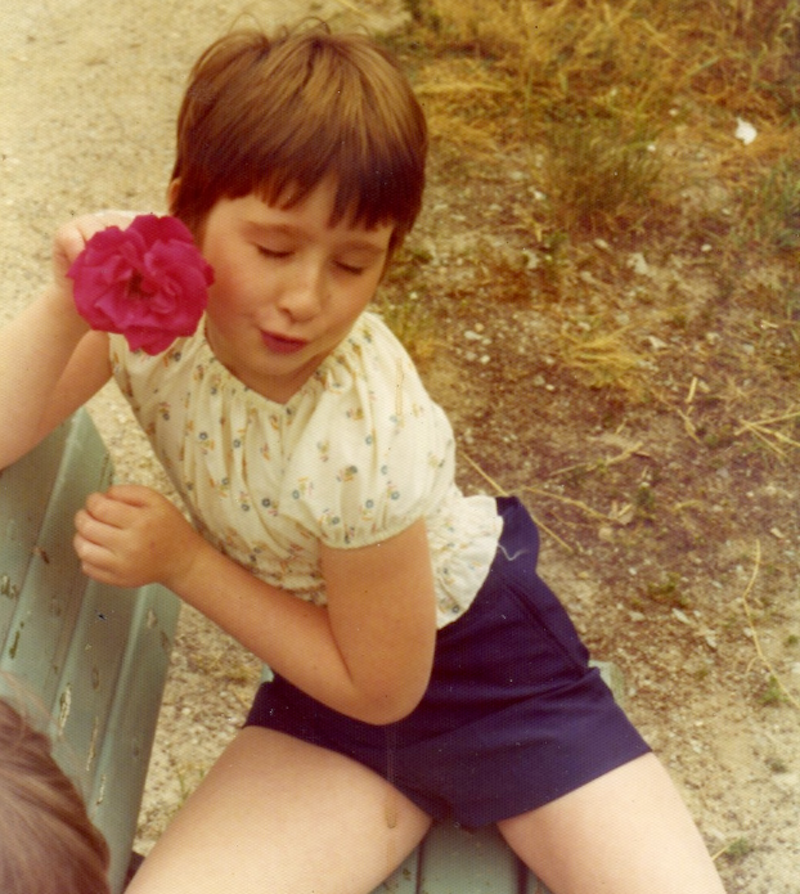 It was 42 years ago, the summer of 1975, and I was in a small, hilly German town along the Rhine, in the midst of a month-long European jaunt in which I was charged with minding my niece Traie (8) and nephew Caleb (6). We’d just had a long lunch at an upscale riverside restaurant, and the highlight was a bottle of Trockenbeerenauslese, liquid silver that my brother rhapsodized over, proclaiming it the finest German wine he’d ever sampled. I didn’t complain, since wine at one p.m. was outstanding (along with the huge chunks of pork smothered in red cabbage), but I’d be fibbing by claiming I captured any nuances whatsoever in the cherished Trock.

While my brother and sister-in-law either napped or went to a tiny museum—can’t recall now—I took the kids for a walk in the town near our hotel. The gardens were splendid, and for some reason, I remembered that a few years earlier I’d been taken by a slight Robert Frost poem from 1928, “The Rose Family.” It’s short, and reads: “The rose is a rose,/And was always a rose./But the theory now goes/That the apple’s a rose,/and the pear is, and so’s/The plum, I suppose/The dear only knows/What will next prove a rose./You, of course, are a rose/But were always a rose.”

(I was a high school senior when Frost was briefly covered in a fall English class, and after I wrote a whimsical, stream-of-consciousness essay on the poem, the teacher, bless her heart, allowed me to skip all the remaining classes and hole up in the library where she generously said I’d learn more. Miss Frazier, probably 25, was a hippie, ’72-style, and lived in the artsy New Hope, PA just a half-hour away from my greater Trenton home. Sometimes, I’d take our station wagon for the half-hour ride, windows open, radio blasting, joint burning, and join her at a café or one of the arts fairs.)

Corny, right? Well, who didn’t have youthful literary lapses? At least Khalil Gibran’s The Prophet—pure mush—or the Jesus craze that hit my high school in ‘71 for about five weeks, didn’t bamboozle me, like many of my stoner contemporaries. Anyway, toting a Minolta 35mm, I had my niece pose with any number of roses, and the result was the above photo, which, in retrospect, looks sort of racy, innocent intent notwithstanding. My sister-in-law was not amused by the print I sent her later in the summer, tossing off a volley of hilarious brickbats that are best left to history. Traie, on the other hand, a witty hambone even at eight, loved this particular photo and the outtakes.

The kicker of that day, though, came hours later. I was at a cheap chicken and fries dump with the kids for dinner, and, while ordering another brew, suddenly my brother came in, and whisked us away to the one-star restaurant nearby where he and his wife were dining. This was unusual, since it was mid-meal, but his excitement was palpable: “Pal, I’ve just had the best beer of my life, and couldn’t deny you the pleasure—right now—of having your own schooner.” Now, this was 1975, way before microbrews, craft beers, and the globalization of all potable items, so when I sat at the bar and waited five minutes, tongue hanging out, for the cranky barkeep to pull my own glass of Pilsner Urquell, I wondered what all the fuss was about. I soon found out, and while somewhat disturbed that this beer (a beverage I knew something about, unlike wine) came from Czechoslovakia, it really was an astounding LSD trip for the tastebuds. I had another, and then returned the next day for a couple more, before leaving Germany for Oslo.

Twenty years old in the heart of Old Europe: I couldn’t provide a better script. The kids were a delight, and each night I recited, off-the-cuff and a little lit, a new chapter of Irving the Wolf and his adventures in the Black Forest of Germany. Irving and I were friends, I assured Traie and Caleb, and on one occasion in Amsterdam, there was a rustling outside our fourth-floor room. One of them was nervous and asked their uncle to investigate: clandestinely rolling my eyes—although I was happy to temporarily escape Caleb’s non-stop singing of Ringo’s horrendous hit, “The No-No Song”—I peered out the window and reported back that it was Irving in the flesh, trying to join us.

They were thrilled, said they heard his howls after all, but alas, never got to meet him because after the five-minute intermission from story time, they’d both dozed off. In the morning, I explained that they’d missed out, with Irving hanging out, having a few Tuborgs with me, reminiscing about past adventures we’d had, but now he was off to rescue his sister from a rival Wolf Lord. The kids’ disappointment was intense, and as they told their parents about the near-sighting, my brother looked at me with a grin, and later clapped me on the back, saying, “Well, pal, as a babysitter you’re unorthodox, but keep that Irving shtick front and center.”

That fall, back at college in Baltimore, I went to a “gourmet” liquor store in Charles Village to seek out Pilsner Urquell, bought a couple of 12 oz. bottles, and it tasted like piss, stale, probably sitting on a shelf for several months. No matter: I remembered that first sip, all those roses and, not incidentally, the pair of light blue sneaker-shoes (the kind that Mick Jagger wore on the Stones’ Exile on Main Street tour in ’72) that I bought for a song in an obscure alleyway store in Copenhagen, and wore upon returning to my job of hawking 60-cent bottles of National Boh at the Orioles’ Memorial Stadium.