No Fear on Horseback 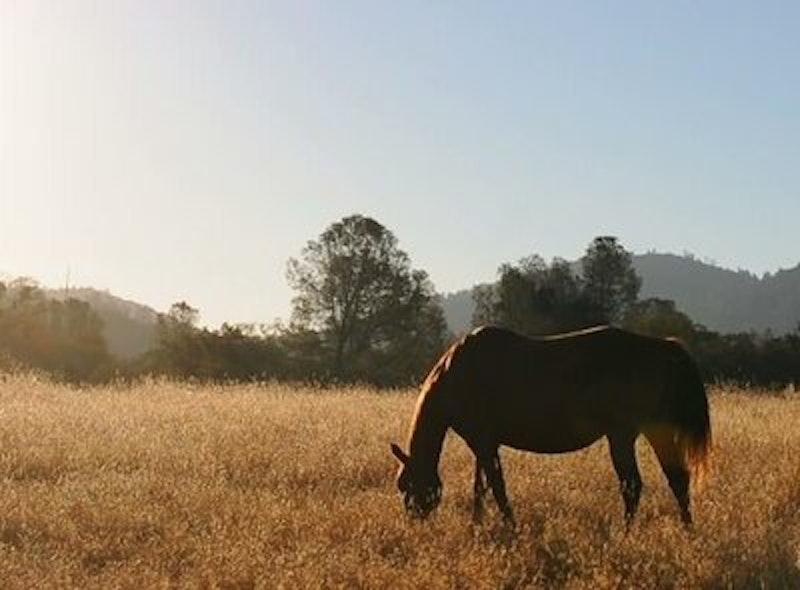 Julio, the horse I regularly ride at Dorothy Crosby’s stable in Stoddard NH was dining when I arrived for my riding lesson a little before 3:00 p.m. That is to say, he was off in the tall grass, grazing. He was wearing his halter. I had his lead rope in hand, taken from its usual place in the barn. I approached him. He kept his head down and kept eating. I moved up on his left and extended my hand. He quietly moved, just fast enough to evade me. This went on for some time.

We both stopped. He resumed his lunch. I began taking short steps toward him, with long pauses. He didn’t move. I came close enough to seize the bridle and clipped on the lead rope. Then I began moving toward the stable. He remained in place. In a contest of strength between a 194-pound human and a 1000-pound horse, the equine animal always wins.

Finally, after some conversation, he began walking. At some level, he understands that his job is to let me ride him, though he’d rather remain at lunch.

Black fly season in New Hampshire, which is supposedly exclusive to June, extended into July this year. The term refers to the swarming of black flies, which bite every warm-blooded creature. They love my wife and so she retreats into the house. They don’t bother me that much. Of course, I slather on the insect repellent. My neighbors insist that the flies come out only in the morning and late afternoon, but I find them out at all times of day.

Dorothy sprays a safe insect repellent on Julio. He doesn’t like it. We have to take off the fly mask to put on his bridle, bit, and reins. The mask prevents the black flies from getting into his eyes and ears and driving him crazy.

Once we were out in the ring, the insects flew up Julio’s nostrils. Every now and then he would fling his head to the ground to clear his nose. This had the incidental effect of flinging me abruptly forward from my seat. With the help of my boots and breeches, I didn’t go flying over Julio's head. I regained my seat, shortened the reins, controlled him, steered him back to the path, and then resumed the trot. I was fine. I don't feel fear on horseback. It's only the dismounting that bothered me at first, and I'm getting used to it.

Sometimes Julio resumes the trot. More often, he walks. I haven’t yet consistently become the alpha in our relationship. Dorothy mentioned during the lesson that Julio can be obstinate, sometimes difficult. At that moment, I was turning him, a rare success in that lesson. I laughed and then replied, "I don't want an easy horse. I want to learn how to ride."

For the moment, I'm simply trying to learn how to keep Julio at the trot. That requires me to move in rhythm with the horse. I've never been particularly well-coordinated, so while I’m improving, I've not yet perfected the movements. Once I do that, then I'll go on to other things.

That last lesson was twice interrupted by the weather. I had groomed, saddled, and bridled Julio, led him to the ring, mounted, and had taken him twice around at a walk while maneuvering him in and out of the orange highway cones Dorothy had set for us so I might learn to drive him—she uses that term, which I find charming—when it began to hail. Rain we can deal with, but the dime-sized hail hit the horse in a series of little stings. For the first time in the months I’ve been working with him, Julio seemed concerned and fearful. So, as Dorothy came over to us, I slipped my boots from the stirrups, threw my right leg over his back, fell to the ground, and we led him back to the stable.

We waited about 10 minutes for the weather to clear. When the hail stopped, we led him back to the ring, I remounted, and I took him to the trot. I have learned how to post, rising in rhythm with the horse's movements, which is how one avoids having one’s seat shoved into one’s sternum. I still don’t do it well. It will still be some time before I learn how to take him to the canter and the gallop, not to mention taking him over the fence.

Anyway, after about five minutes of trotting, the lightning flashed, the thunder roared, and the rain poured down. Thunder terrifies horses. So I rode back to the stable, took him to his stall, groomed him, cleaned up the mess, and went home. Happily, he had relieved himself outside the stable and so I didn’t have to shovel that up, not that I would have minded. My brothers, sisters and I were taught to pick up the toys and clean up after we’d played.

Major General John K. Herr, the last Chief of Cavalry of the U.S. Army, estimated that a competent cavalryman needed two years' training. That was a full-time job, eight hours a day in the saddle followed by the grooming, plus the other elements a soldier must learn of the profession of arms. Recruiters always admitted that the cavalry was among the most physically-demanding of branches. It may explain why so many old cavalrymen lived into my lifetime. They had to be extraordinarily fit to do the job.

I do this one day a week for two hours. At this rate, I’ll be working with Julio and his successors for the next 30 years. I should be competent at the age of 92.