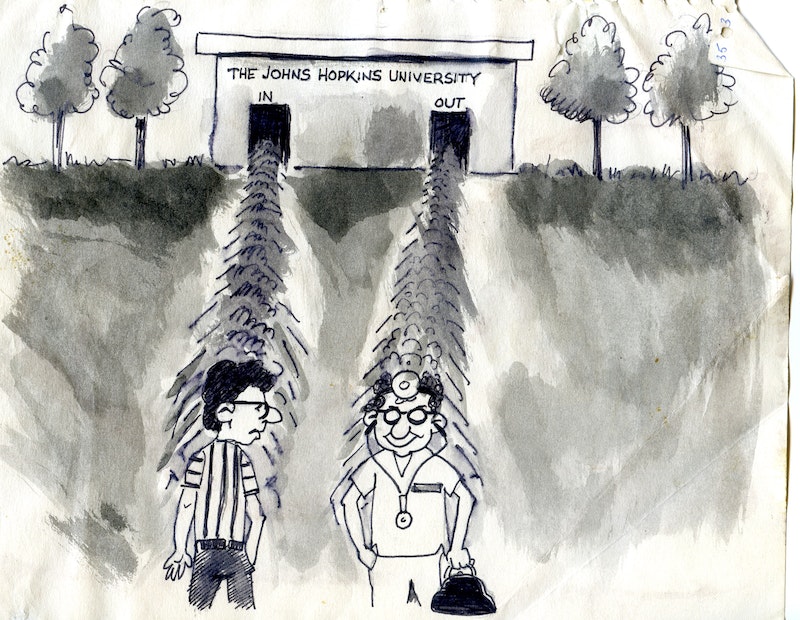 At Christmas break after my first semester at Johns Hopkins in 1973, my brother Doug (Hopkins ’69) and I had a long conversation about the pros and cons of the university. Not atypical for an English major, I ranted about the overwhelming presence of pre-med students (neatly captured in my friend Craig Hankin’s illustration above, for the Hopkins News-Letter as I recall), the “throats” as they were commonly derided, the guys—and a few women, this was ’73 after all—who were nameless, shuffling around campus with a huge stack of books, muttering about eight a.m. Organic Chemistry classes and living in the library. Doug wasn’t buying any of it: “Years from now, when you’re inevitably at the hospital for a procedure, you’ll be happy to have a Hopkins-educated doctor holding the scalpel.” Eight years older than me, Doug gently said I was naïve; that students grow up and settle into lives that are completely disparate from college days. Yes, he agreed, some doctors will always be pricks, but the God-complex is often part of the profession. Doesn’t mean they’re not skilled.

As it happens, on the few occasions I’ve had this or that done at a hospital—nothing major, a busted foot here, thrown-out back there—I’ve no idea where the various docs matriculated, but my brother was undoubtedly correct. In fact, in 1987, at a 10th anniversary reunion here in Baltimore, I was pleasantly surprised at just how decent many former adversaries, at the age of 31 or 32, had turned out. People I’d regularly ridicule in the pages of the News-Letter—some pre-meds weren’t entirely invisible, but involved in student government, lacrosse and fraternities, as well as overwhelming my freshman dormitory Griffin Hall—were cordial partners for a 10-minute conversation. Who knows what they thought of me—I was co-owner of Baltimore’s City Paper at the time—but several were diplomatic enough to offer congratulations on my professional success, and I reciprocated.

A lot of pre-meds at Hopkins wash out after the first year—many relieved, shedding their parents’ desire for entirely different lines of study—but a bunch of my friends soldiered on. I remember one fellow, a genial and kind person from New England who was active in the party scene, who couldn’t resist an 11 p.m. entreaty to go on a weeknight adventure. His grades suffered and by junior year he’d flunked out. Not uncommon. Another, also lacking the pre-med gene, graduated but had a devil of a time getting into medical school. He persisted, taking the MCATs over and over, and finally found a university that’d take him. After years of internships at podunk towns, he emerged as a renowned brain surgeon in Manhattan.

I do recall one incident in 1975 at a dance at JHU’s Glass Pavilion that was illustrative of the divide between arts and science majors. I wasn’t gifted on my toes, but did enjoy enthusiastically dancing, and, as the evening grew late, after a gallon or so of keg beer, and a tab of Mr. Natural, I slipped and hit the stone floor hard right on my noggin. I was out for just a few seconds, but clearly remember my News-Letter colleague Marc Duvoisin (now managing editor of The Los Angeles Times), separating the rubber-neckers from those who could help, and issuing a directive: “All pre-meds, leave!” I was shuffled off to nearby Union Memorial Hospital, diagnosed with a mild concussion—and given a lecture—and was on my feet, ready to roll just 36 hours later. Who knows, it could’ve been a JHU graduate who treated me.