Are We Beyond All Redemption?

By the time any of us takes meaningful action, it will be too late. 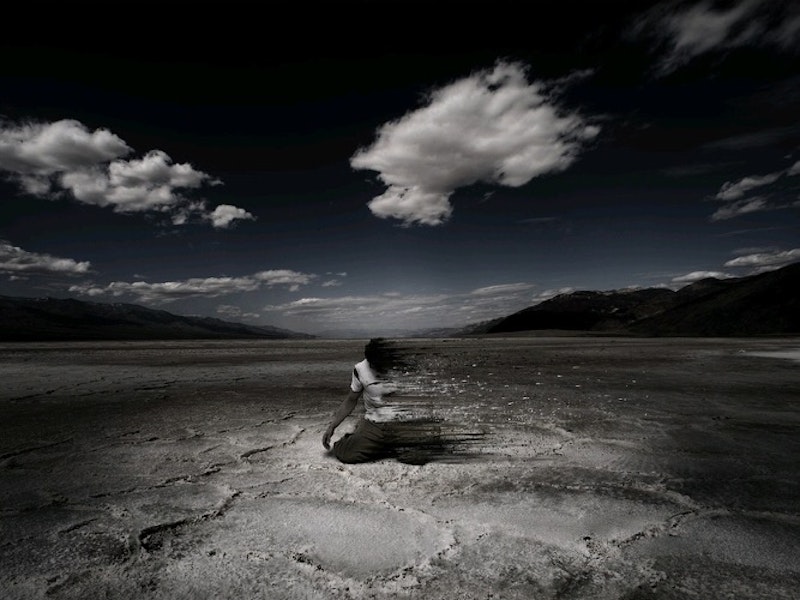 Certain truisms—not necessarily original ones—recur and are recycled in my mind from time to time, sometimes surfacing in conversation. This is one of them: “The older I get, the more I understand why so many people willfully surrender their lives to drugs and alcohol.” Adulthood is a trap; you’re granted the freedom you dreamed of as a child, only to realize, swiftly or not, that freedom isn’t free, that knowledge isn’t necessarily power, that life doesn’t automatically become easier or more enlightening.

I spent this past weekend visiting a college friend and her family in the suburbs of New York City. She took me to an intense, hour-long spinning class led by a burly, enthusiastic dude who looked like Will Ferrell. There was a hike, dinner at a great Indian restaurant, exchanges with her two irrepressible and curious children. Somehow the friend and I found time for the sort of deep, searching discussions we never could have had as hapless undergraduates: about dreams, death, religion, feelings.

At some point, the talk turned to Ferguson, MO; the friend asked me to explain why it mattered, what had happened. Why was this place constantly in the news? What did it mean? I thumb-nailed Ferguson and Baltimore so she could understand, and we proceeded from there as I swallowed my disbelief that it was even necessary to explain modern American police brutality and punching-up to anyone in 2015.

Later, falling asleep and turning this over in my mind, I was better able to fully grasp her disconnect. My friend is a non-practicing attorney who a) resides in an affluent suburb, b) is not on social media and doesn’t watch television, and c) is extremely focused on her family and businesses she’s attempting to launch. Her world, in other words, is vastly different from the one in which myself and most friends, associates, and family members of mine reside. It’s a realm of social and economic mores that I’m just fluent enough to absorb and nod knowingly in acknowledgement at without inadvertently transmogrifying into some sort of rabid Michael Moore acolyte. The real, key question was this: did I pity her dissociation from a significant American humanist narrative, or did I envy her? I fell asleep envying her.

That weekend the friend and I talked a bit about ways that reality can be perceived: literal, spiritual, at a distant remove. We attended many of the same philosophy courses, so this was in a sense a continuation of those half-forgotten Michel Foucault-fueled colloquies. She’d graduated to other gurus, and promised to pass along the requisite YouTube links, and I found myself awed by the conceptual nonfiction she devoured on the regular. She’s a singularly focused conversationalist, and it’s easy, often, to lose track of a train of thought. Here’s a strand I dropped and just found: maybe the paranoid and certifiably insane are simply more tapped into what’s actually happening than the rest of us are. Again, hardly original—but consider the most far gone among them, shut up in sanitariums and heavily tranquilized, adrift in placid daydreams, and swear to me on a King James Bible that you’re not even a little jealous.

As a child, I was known to throw myself headlong into sci-fi story anthologies. In one story a man leaves a security-smothered nightmare America to travel to an island where his ex-wife and child reside; it’s a sort of high-tech paradise for those who can afford to wall themselves away from the increasing barbarism of the larger world. When the man, sickened by the island, inevitably leaves, the ex-wife has a clone of him created; this is the story’s big twist. What this has to do with anything, I don’t know. I don’t remember what the story was called, or who wrote it. Maybe it doesn’t even matter.

A high school girl was yanked out of her seat and thrown to the ground in her classroom by a police officer, when she failed to obey the officer’s order. The United States and China are, and have been, engaged in a very subtle game of chicken that everyone everywhere should be freaked out over; not to be outdone, Russia is engaging us in a parallel game. Our telephones are turning us into automatons, and we’re all pretty thrilled about it. The drones that are efficiently slaughtering terrorists and anyone else who happens to be nearby will soon be delivering your Amazon orders. Your neighbors are kind, caring people unless they know enough to hate you, or many of those you know and love, who perhaps are at odds over a war of tiny differences that don’t matter in a larger sense.

Most of the 2016 American presidential candidates are jokes the media can’t resist repeating, over and over again. No one’s mind can be changed. Refugees abound and you probably know someone who will become one before too long. A new ocean is forming to the north. We probably both have cancer and won’t be able to find gainful employment elsewhere should the need arise. Five minutes after shutting the browser where you’ve skimmed this article—alternating between this site and, say, Politico on your iPhone—you’ll have forgotten every word, every idea, every failed segue therein, plus to take out the trash, brush your teeth, call Mom back, put the cat out. By the time any of us take meaningful action to sell everything, fall off the grid, and escape to a remote mountain cabin beyond the range of cellular service, it will already be far, far too late.