I regretted the way I’d let anger dictate my thoughts and actions. 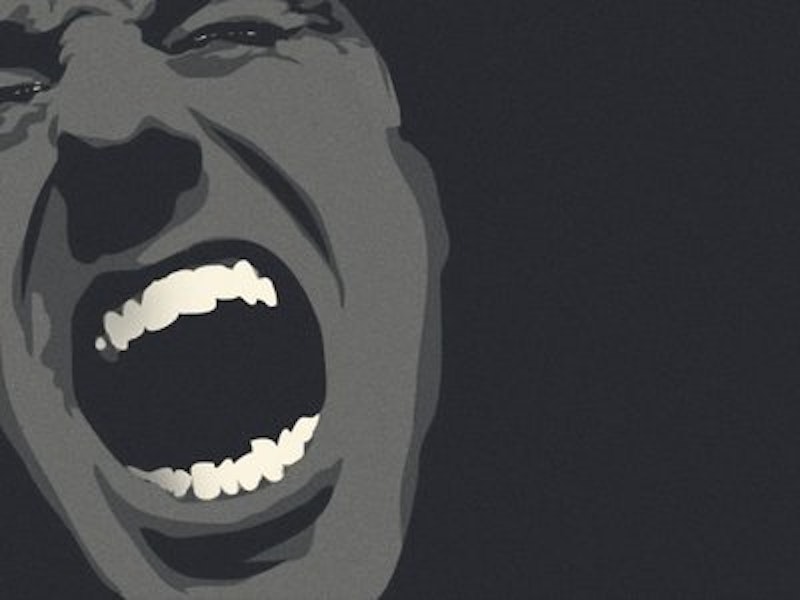 At my court-ordered anger management class, the instructor said, “You’re the type of person who holds something in for too long, and then, when comes out, it explodes.” I’d been telling myself that I didn’t need the class, that it was all just wishy-washy bullshit. But she was exactly right. This was the real reason I’d gotten charged with second-degree assault and, in addition to a month of anger management courses, sentenced to spend three weeks in work release.

One year earlier, I’d punched the singer of my band, Paul, onstage—in front of an audience of about 60 strangers. My mom, dad, sister, grandpa, step-grandma, aunt, and two cousins were also there.

Paul and I played in a metal band called Dysdera. We constantly evaluated each riff, as well as the songs as a whole, to make sure that nothing was too predictable. The result was the best music I’d played—a mix of venomous sludge metal and hyper-fast hardcore.

It’s difficult to find people that know about underground heavy music, let alone musicians that can play it well. Sam wrote brilliantly discordant guitar riffs; Chris’ bass work sounded like a sandworm from Dune burrowing through the earth; and Paul could scream and growl like a feral badger. I was 24, and I’d been wanting to play drums in a band like this since I was in high school.

Within six months, we’d opened for Black Cobra (a key influence) and many of Denver’s amazing bands. Playing this music live fills me with a raw electricity that I can’t find anywhere else, and Dysdera helped me discover that. At some point, though, band practice became an exercise in cutting passive aggression between Paul and me. Later, when I told my friend about this situation, he said, “It sounds like psychological warfare.”

We all jibed each other at practice and shows—mostly good-naturedly—but the interactions between Paul and me turned into something entirely negative. Although I’m not quite sure when our relationship became caustic, I think it stemmed from a misunderstanding. When we started Dysdera, I’d been sober for about three-and-a-half years. Paul loved to smoke weed, but it didn’t affect his performance, so it wasn’t any of my business.

One night, I watched Doug Benson’s mockumentary, Super High Me. Despite the comedian’s jokes about the “dangers” of weed throughout, he also admits that he gets high to deal with anxiety. With Chris and Paul the next day, I talked about Super High Me, saying, “That’s such a horrible idea,” in reference to Benson’s self-medication. Paul had previously mentioned that he felt anxious if he didn’t smoke. By the time I realized that he took my comment as an insult, however, our anger for each other had mutated into hatred.

Paul and I started mocking each other in subtle and vitriolic ways. My parents paid for my school, so Paul often said something about me being an idealistic rich kid. He was right. In true neo-liberal fashion, I’d loudly voice my opinions on how people should live, rarely thinking about how privileged I was. At one practice, Paul showed me a sketch he’d drawn. He was a good artist, and the face on the page looked exactly like mine. With a shaved head and stubble, the face had a dialogue bubble next to it that read, “Moral$.”

I kept pressing the addiction button with Paul. I knew that his drug use was a soft spot, so I poked at it, routinely saying how shortsighted it was to hide behind a veil of pot smoke. When we derided each other, it was buried in an anecdote, joke, or seemingly harmless comment. I often didn’t realize that he’d been talking shit to me until a few days later, and it was likely the same with him. The goal was to make the other person feel like a dullard.

After six months of this mutual psychic abuse, we booked a show at the Aggie Theater in Fort Collins. Even though it was our biggest concert yet, I decided that it would be my last with Dysdera. We’d recently recorded our first LP, and I loved every second of it. But I constantly felt on-edge at practice, and the passive aggression between Paul and me had become more acidic.

Of course, in true asshole fashion, I had to get in one last jab. We set up our equipment on the large stage at the Aggie, and then I said something cutting to Paul backstage. I can’t even remember what it was. Also wanting to have the last word (our personalities were much more similar than either of us would’ve admitted), Paul waited until our set to get back at me.

Despite the fact that this was our biggest show, Sam got wasted beforehand. Most of our songs had curveball changes that were difficult to pull off sober. We stumbled through the first two songs. Paul, Chris, and I were pissed at Sam, which only exacerbated the tension between Paul and me. After we finished the second song, Paul said, “This next one goes out to J.J.’s mom, because she’s so cool.” My parents and family have always been amazingly supportive, and my mom had been to multiple Dysdera shows. Given the context of my relationship with Paul, I felt sure that he was making fun of her. In that moment, a red heat constricted my brain.

We played two or three more songs. The next thing I remember is hearing Paul say something about “sucking on your mother’s titties.” What scares me now is how immediate my reaction was. I got up from my drum stool and punched him repeatedly in the face.

The scene quickly devolved into a farce. Sam and I screamed at each other while I broke down my drums. My dad climbed onstage to keep Sam and me from getting in a fight, but then he and Sam nearly came to blows. Wanting to leave before the cops showed up, I hurriedly loaded my drums into my truck. As I drove away, a police cruiser pulled up to the venue. Paul and a police officer both called me that night. I deleted Paul’s message without listening to it, and laughed as I listened to the policeman’s request for me to call him “regarding the events at the Aggie Theater.”

One year later, my sister got pulled over because there was a warrant out for my arrest, which I didn’t know about. I turned myself in and went to court a month later. The judge told me that I could get the assault charge reduced from a felony to a misdemeanor, but I either had to spend a week in jail or three weeks in work release. I chose the latter so I could keep my warehouse job.

Work release is basically diet jail: you get to leave for work, but, when you’re off, you have to stay in a dismal concrete facility with several other inmates. Here, time trudged like a dying tractor. During those three weeks, I often thought about the night at the Aggie. I didn’t regret punching Paul. Instead, I regretted the way I’d let anger dictate my thoughts and actions—like some kind of mind-controlling parasite—rather than dealing with the situation before it got so out of hand.