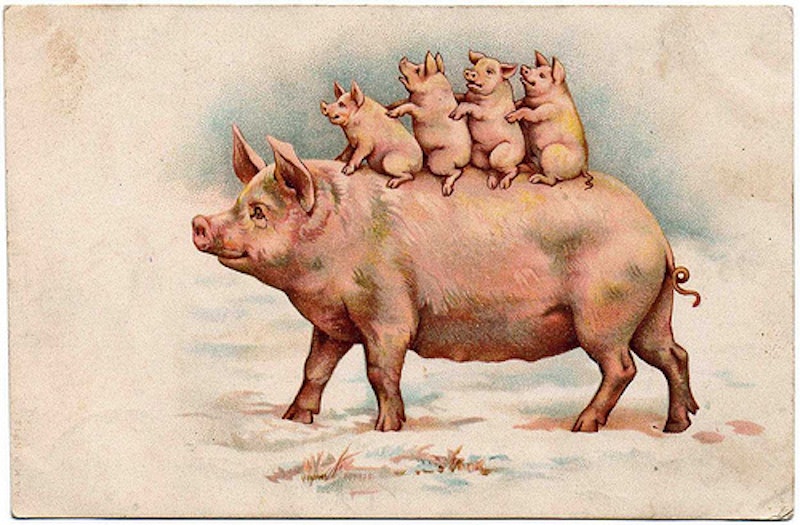 I was feeling snotty and unappreciated one day, so I created a literary magazine called Pearls Before Swine. Like, you know, my words were the pearls and the readers were the swine.

I didn’t have much of an audience or a Millennial media lifestyle brand anyway, so it didn’t matter if I insulted them. There was no one there to insult. I was writing in a void. “You’re just a stupid pig,” I tweeted to no one, and no one cared. No one’s feelings were hurt.

Or so I thought!

Imagine my surprise when one day, as I sat at my desk, toiling in apparent obscurity, wearing my special cap with a feather in it that I jokingly refer to as my “thinking cap”… an army of pigs marched through the door! Actual honest-to-god pigs!

They spoke to me in a sort of pidgin-hybrid of American English and oinks.

They had a leader whom they referred to as the Mayor. He wore a medal on a ribbon around his neck. I don’t know the backstory there, but I bet it’s a doozy.

“Excuse me, oink, fine human sir,” said the Mayor. “Are you, oink, the individual who’s responsible for this publication?” He pivoted to the side, and somehow—don’t ask me how—there was a copy of my magazine, strapped to his back kind of like a saddle. It was the latest issue and everything.

I stared at the Mayor and his pig friends. I didn’t know what to say. I wondered if they were insulted—was “swine” considered derogatory? If I’d insulted them—what would they do to me? They looked like domesticated pigs, the kind you would see on a farm—like Wilbur from Charlotte’s Web. I hoped they were more civilized than, say, wild boars. I hoped, if need be, they’d listen to the voice of reason.

I gulped hard and decided to tell the truth. “Y-yes, sir. That would be me.” It might sound weird that I referred to a pig as “sir,” but the Mayor had a gravitas about him that commanded your respect.

The Mayor and his pig brethren stared at me. It was a tense moment. I thought of that saying “in a pig’s eye” and wondered what the heck it meant. If I’d ever known, I couldn’t remember.

He said: “And these words, oink—these are your ‘pearls’?”

Gulp. “Y-yes, your grace. Those would be them.” Admittedly, saying “your grace” amounted to laying it on a little thick, but at this point I was both awed and getting pretty freaked out. The Mayor turned to his left, then to his right, for dramatic effect, making sure he had the rapt attention of all who were assembled.

He said to his pig pals: “This is him—the one who has been giving us pearls! The others all scoffed. ‘Oh ho ho, what a joke—bestowing our precious pearls upon a bunch of lowly swine.’ Even the freaking Bible made fun of us—the Bible, bro! That’s what started it, in fact!” He shook his piggy head from side to side in sad acceptance of the truth.

He continued, brightly: “But this man—this paragon of open-mindedness and compassion, oink! He gave us pearls of wisdom, proffered expressly to us—it says so right in the title!” I wondered if the pigs had ever heard of irony, or even sarcasm, but I wanted to be their hero so I didn’t bring any of this up. I decided to just go with the flow.

He said to his followers: “Well, folks—what are you waiting for? Let’s give him an, oink, group hug! Circle of mud!” I gathered that “circle of mud” was their special oink-language word for a group hug.

And then the pigs shuffled up to me in a most endearing and stub-legged manner, surrounding me with their love and oinking out their glee. They even sort of nudged me with their soft snouts until I was riding on their backs, like when someone is tossed into the air while everyone sings “For he’s a jolly good fellow.”

They carried me off to their pig town, which was a self-sufficient democracy away from any humans, with some rather commendable social-welfare programs for the poorer pigs. They made me their Writer Laureate. I was so happy and self-fulfilled that I stayed there. I married a beautiful sow, and we have half-pig, half-human babies. And I was never condescending again, even on social media.