I liked a photo I saw of a toddler holding a “Keep Abortion Legal” sign. 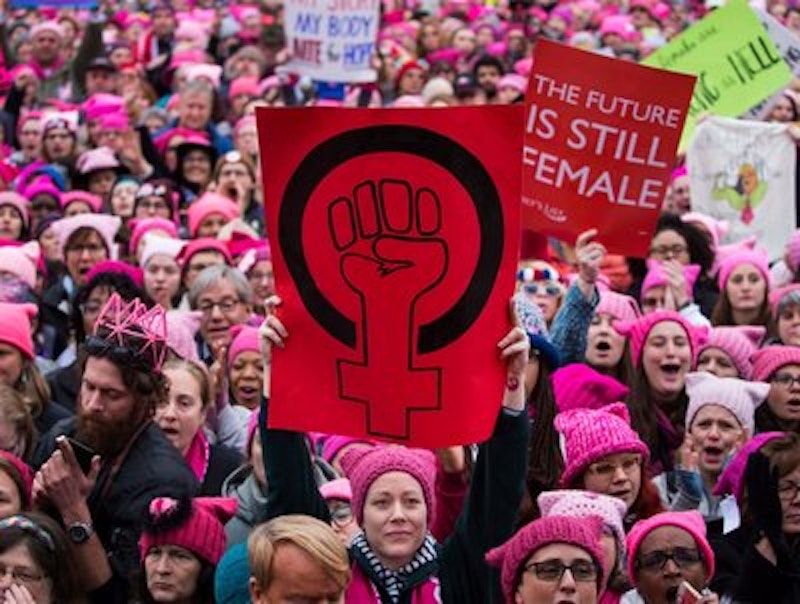 The raucous absurdity of our times is overwhelming. Ronald Reagan’s CIA Director William Casey was quoted by Assistant to the Chief Domestic Policy Adviser Barbara Honegger and White House correspondent Sarah McClendon as stating, “We’ll know our disinformation program is complete when everything the American public believes is false.” The CIA is inept in its assigned task of collecting information and projecting possible outcomes of foreign affairs, but its rogue domestic operations have been amazingly effective. Here in 2017, the American people don’t know anything.

Standard operating procedure when dealing with leaks of sensitive material generally consists of discrediting the source and “poisoning the well,” generating enough data chaff to obscure the real subject of inquiry. One of the most effective disinformation tactics ever devised by CIA was the creation of the “conspiracy theorist” meme to impede inquiry into the clearly flawed Warren Commission report on the assassination of John F. Kennedy, backed up by heavily funded “scientific” research pathologizing citizen inquiry into dubious historical events. If you doubt that Lee Harvey Oswald was the greatest marksman in the history of sharpshooting, it’s simply because you suffer from a mental disorder, a compulsive need to make sense out of irrational events, like 19 Arabs with boxcutters penetrating the tightest and most expensive air defense system in the world with civilian aircraft or journalist Michael Hastings’ brand new Mercedes hijacked by gremlins.

These people suddenly worried about the expanded powers of the executive branch of the government are amusing as hell. Where were they when Ed Meese and Oliver North cooked up Rex 84 and Operation Cable Splice under Reagan? Where were they when George H.W. Bush unleashed his campaign against former ally Iraq for defending their oil fields against Kuwaiti slant drilling in 1991? Where were they when the Clinton administration violated the Posse Comitatus Act by sending military forces to Waco, Texas, or when they needlessly deployed NATO forces to destroy Yugoslavia? Where were they when George W. Bush effectively suspended the Constitution and kicked off an ever-expanding never-ending war with no clear objective or goal, a war on an abstraction labeled “terror” that metastasized even more under his successor, Barack Obama?

The international Women’s March last Saturday was an example of pointless virtue-signaling and narcissistic self-pity. Watching the footage was a tremendous exercise in schadenfreude. Close to a million women and their supporters showed up in D.C., with their pathetic disempowering knit pink pussy hats, mewling about the blasphemous eldritch horror of an alpha male in the White House. I really liked a photo I saw of a toddler holding a “Keep Abortion Legal” sign, and I spit beer out of my nose when I saw a sign reading, “Stop The War On Women.” The latter was the only evidence I saw that anyone there knew or cared that there’s a war on. Somehow I’ve missed the drone strikes on Planned Parenthood clinics and the mass incarceration of women seeking contraception and abortion. I know there’s a War On Drugs. I’ve lived my whole adult life half-expecting to have my door kicked in by a SWAT team because I smoke flowers.

A peak moment was when organizer Linda Sarsour got up to the podium to preach the virtues of Sharia Law. Watching this overwhelmingly white middle-class crowd of women applaud the proposition that Islamic law will protect them from the depravity of cis-gendered heteronormative patriarchal white men was epic, as was the footage of one of the marches in Europe, where the great feminist horde began chanting “Allahu Akhbar.” It’ll be fun to see how that works out.

Logic and proportion have fallen sloppy dead, as the great Grace Slick once sang. She had the good sense to retire while she was still at her peak, unlike that wretched overrated slut Madonna. Reality is closing in on David Lynch and Thomas Pynchon. I can’t wait for the new season of Twin Peaks. I wish someone would adapt Gravity’s Rainbow into a long-arc television series. James Franco was born to play Tyrone Slothrop. To paraphrase Joe Hill, “Don’t mourn: Netflix and chill.”