My Mid-Life Crisis and the Man in the Elevator

If only I’d written obits for The New York Times. 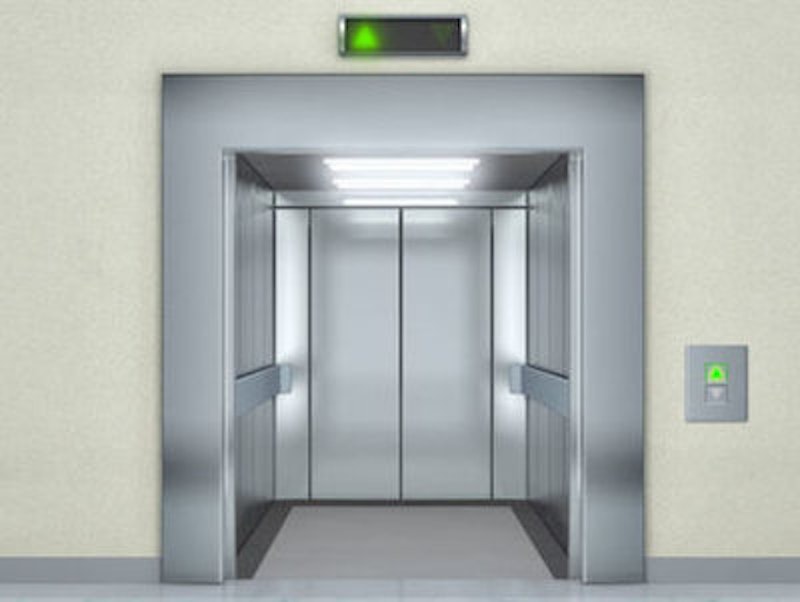 Bear in mind that none of this happened. I bothered to construct the following fantasy and I’ve never thrown it away. It hangs on after six years of occasional use. That fact shows something about me. My soul may not be small—I hope it isn’t—but let’s say it’s musty. To visit my psyche is to be somewhere out of the way, a spot that’s down a few corridors and around a few corners. I mean that I never did live my life, and I think my daydream demonstrates as much.

The fantasy is that I’m a new guy at The New York Times and I get chaffed by one of the old hands. This is in the elevator coming back from lunch. The old hand and a buddy get on board, and I stand back against the wall as they chat. The old hand catches sight of me. We don’t know each other from work, just from the hallways. Maybe we’ve been introduced. He knows that I’m a copy editor and new, and obviously I’m young. Thirty-five, 36 or so, but at the Times that means you’re a kid.

The old hand leans toward me. He raises an eyebrow and with delicate interest inquires, “And how is the novel?” The joke being that every young copy editor has a novel in his drawer and is telling himself that’s his real project.

I’m ready for him. “I don’t keep up,” I say. “How are the cinema and the dance?” Touché! My interlocutor smiles quickly, his ear canting up a half inch as he absorbs the sting. Meanwhile, his buddy makes a show of laughing. “Well, Walter,” he says, announcing his approval. “How are they?” Afterwards news of my comeback circulates. All agree that I have hit the right note. Wit and sense are both mine. I’m a young fellow to respect.

This fantasy sprang up when I had turned 49 and felt awful about my life. I hadn’t gone to the Times. There’d been a chance back in the 1990s, but I didn’t follow through. Instead I went off to seek adventure and write novels, with neither quest amounting to much. Really, I think I was afraid of coping with a new office, since my social skills are painfully bad. Instead I chose to sideline myself. The result, or one result, was that for a few weeks I thought again and again about all the ways a life at the Times would have been better for me. Obviously, I felt, that would have been my good life, and I’d have been a good person—a disciplined, functioning, self-aware person—if I’d had the gumption to pursue it. Instead I’d flopped about and followed my nose. Now here I was, all alone and with nothing to show.

Not that my parallel existence at the Times was anything spectacular. I didn’t rise to edit a section or impress star reporters. Instead I found my niche as a writer of something specialized, something that required a touch. I figured that most likely this would be obits. At any rate my fantasy self was allowed to sit in a corner and weave my special items, and so would pass the rest of my imaginary life. I’d do my yoga and on Saturday mornings I’d teach adult literacy. Taking a night class at Hunter, just to keep busy, I’d meet a Puerto Rican nursing student with big ears and a wide smile, and we’d get married. Possibly we’d have kids, though here the fantasy’s detail thinned out.

The premise of this fantasy, the thing underlying Times and marriage and laudable off-hour pursuits, was that I didn’t pine after being a writer. In real life this pining had been the center of my existence. My real self figured I couldn’t cope unless I had something big and glossy to show people, an accomplishment that made them step back. Writing a book seemed my best shot. At the same time, it was too intimidating for me to settle down to it. But in my fantasy I’d realized the silliness of all this. I suppose my fantasy self didn’t have my shyness. Therefore, he didn’t need to make a name for himself. Therefore, he didn’t tell himself silly stories about what he was going to do. Working at the Times would give him enough cachet to be getting on with, and he could get down to doing what everybody does, which is living a life.

The winter ended and my fantasy thinned out. My non-existent life at the Times no longer seemed like something I’d been exiled from. Theresa and my literacy students and my life of centered contentment all faded away. I stopped thinking about any of it. Except now and then I revert to the elevator episode: “I don’t keep up. How are the cinema and the dance?” I’d imagined the life I might have led if only I’d had self-respect, and this is the one detail that stays with me. Make of that what you will, but I find it rather depressing.