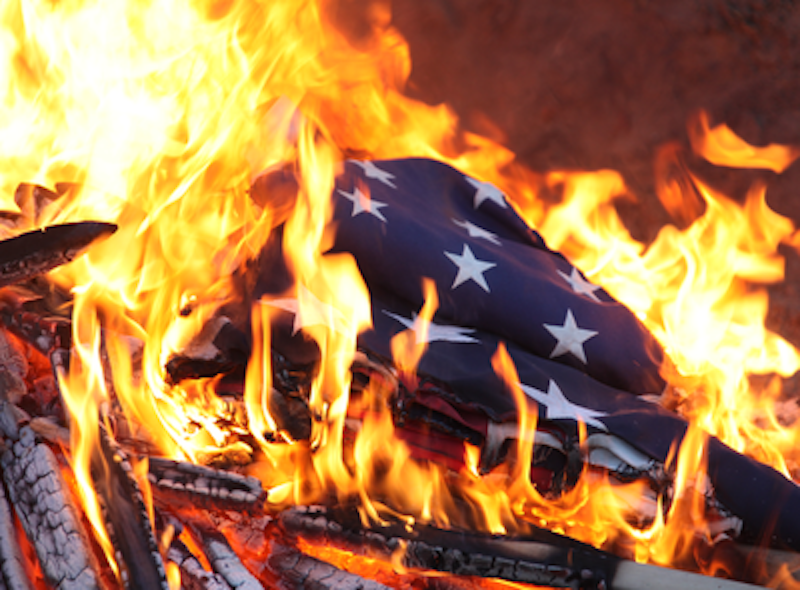 The paleoconservative watches the ongoing national anthem-related fracas in the NFL with satisfaction. At long last, public figures—in this case the Blacks contracted to abuse each other in a violent entertainment for the amusement of a corrupted American petit bourgeois—are challenging the mores of a Zio-American Empire that, cancer-ridden, lurches towards its grave.

My only objection is that these protests don’t go far enough. O brave Black sportsmen! Will you merely kneel? No! Rather, also burn “Old Glory,” parading around the stadia where you ply your dangerous craft by the light of torches fashioned from scraps of that parti-colored symbol of  vicious neo-liberal military aggression. Trample it under your cleated feet, smear it in filth, soak it in mud and semen, profane it with smegma and tar before, having doused it in kerosene, subjecting it, with the touch of a match, to that fiery consummation that it deserves. Yes—to that same destructive fire the mongrel “country” that it represents deserves.

For consider: what is the United States today? A polyglot Babel; a sewer of post-Christianity and suburban consumerism; a violent beast in the Caligulan throes of its syphilitic decline. What kind of country is it where the Christian faith of its founders is endlessly attacked by a hostile cultural complex populated disproportionately by a mercenary clique of cosmopolitans, the ungrateful spawn of recent immigrants? Where an American Conservative contributor’s mere wholesome act of calling for the ethnic identification of Semites propagandizing in print for Endless War calls forth a moral outrage? A moral outrage far in excess of that which those warmongers’ actual bloodthirsty agitations call forth?

This is a country where the venerable Russian Orthodox theologian/Byzantinist Professor Daniel Larison, in his mule-faced droning profundity our era’s heir to the towering figures of 19th century German humanistic scholarship, apparently still (at least if a 14-second Google search is any indication) lacks a real academic job. This, even as bloodthirsty Zionists and advocates for transgender perversion occupy our once-great universities, those once-noble citadels that, in eras past, served as the collective redoubt of the Protestant Gentleman—not to mention of the acceptable Catholic and, on occasion, the discreet and assimilated fair-haired Germanic Jew.

Go on, Black sportsmen! Burn, desecrate, defile the American flag—that symbol of wickedness, that icon of the perversion of the fine Old American Republic into the vampire that it is today.

No, it’s even worse than that. The American flag is an idol, worshipped by our lumpenproletariat, who’ve been whipped into a jingo frenzy by those propaganda apparatuses operating in New York City, Los Angeles, and Tel Aviv. But recall: THOU SHALL HAVE NO OTHER GODS BEFORE ME—so warned a merciful, but by no means all-patient, Lord!

The paleoconservative is in the eyes of the ignorant a “split” creature: An American Anglo-Saxon converted from his ancestral White Protestantism to the Russian Orthodox Church (Moscow Patriarchate).

In truth, there’s no “split” at all. Conversion to the blessed church of the Kremlin represents the fulfillment, and not the denial, of White American Protestantism. It represents the apotheosis of what the fine White Citizens’ Councils of my Indiana youth used to call “100% Americanism.”

This is not the place to examine the complicated identity of Russian Orthodoxy and White Anglo-Saxonism. That would require a long treatise. Suffice it to say that a cringing devotion to the Russian Orthodox church and Russian state, and an ostentatious subscription to the many hatreds that that church and that state wonderfully cultivate amidst its glorious low-rent Sovietized muzhik flock and constituency—hatred of the devious Tatar, the fascist Lett, the scheming Jew, the treacherous Little Russian, the greasy and sensual Turk, the mentally subpar Estonian, the weak-chinned Finn, the loathsome Teuton (spawn of the BLONDE WITCH), the thuggish Kazakh, the demonic Pashtun, the grimy-eared Moldovan, the grifting Romanian, the tongue-tied Belarusian, the MURDEROUS GEORGIAN BASTARD BELOVED OF THE STATE DEPARTMENT’S ISRAELI-AMERICAN RUSSIA-HATING DEMONS—as I say, these things are really as American as apple pie.

Not that the dual identity of us paleoconservatives—at once quintessentially American and passionately Russian—doesn’t create tensions. I was reminded of this the other day when Brother Aiden told me that he had impregnated Sister Marie—that he was expecting a child.

He scratched his head while I absorbed this fact, and then he said, “But I don’t know what I’m going to do about the little one’s middle name.”

“Sure. Think about it. Should the kid’s middle name be my mother’s maiden name, in the fine old White tradition? Or should I go Russian, and give the kid a patronymic?”

“That’s right.” Aiden absently touched his crotch, as he tends to do—a bad habit. “I don’t know what to do.”

I don’t either, now that he mentions it. My own daughter was born just before my conversion to Russia. Giving her a patronymic—Johnovitch—was never an issue. What should Aiden do?

This interesting question will require thought, and research.