Dream 3: On Being an Autumn Beach Bum

The sea and the subconscious. 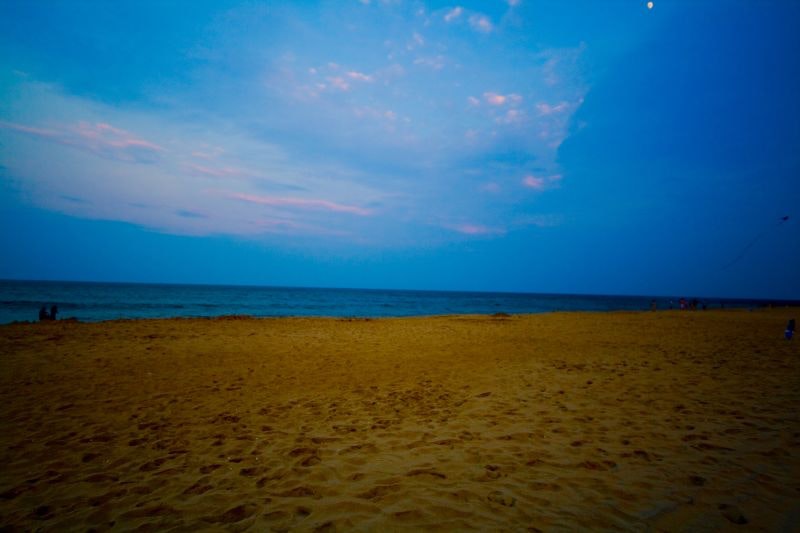 I had my first chance at being a year-round beach bum 10 years ago. I’d been diagnosed with cancer, gone through chemotherapy, and survived. I drove down to the beach, the beautiful Eastern Shore of Maryland, and used whatever money I had to rent a house for a couple of weeks. It was fall, the offseason. I’d just missed death, and thought maybe I’d just stay here. One night, late, I swam far out into the ocean until the lights of the shore were small and distant. I laid back, softly treading water. I had almost died once. I wasn’t afraid.

After a few days I felt the stress begin to leak out of me. Away from D.C., I was adjusting to a new rhythm—the natural world. I was beginning to live in a Terrence Malick movie. His best films, such as Days of Heaven, The Thin Red Line, and The New World, all involve a protagonist who’s pulled away from a dreamlike paradise to confront war, violence, and sin. I was living in the dappled, charged world of the spirit, which is, ultimately, the real world. The cold and restless Atlantic was like my subconscious, what Carl Jung would call my shadow, the dark, lustful, depressed, angry, and creative soul. Looking back and remembering its grand mystery, I think of an Internet comment someone made about Max Richter’s composition “Dream 3”: “I come here to remember who I am.”

Ten years ago, I eventually returned home to Washington, D.C. There were medical bills to pay, jobs to do, girlfriends nagging me, an aging mother to take care of. I was a journalist trying to survive after the digital revolution, when no one paid and most websites trafficked in garbage clickbait. Norman Mailer was dead. He was replaced by BuzzFeed.

I also had to finish integrating my shadow. According to Carl Jung, the shadow is the unknown ‘‘dark side’’ of our personality—the negative, primitive human emotions and impulses like sexual lust, power strivings, selfishness, greed, envy, anger, or rage. According to analyst Aniela Jaffe, the shadow is the ‘‘sum of all personal and collective psychic elements which, because of their incompatibility with the chosen conscious attitude, are denied expression in life.’’ Jung argued that there were positive, essential, parts of the shadow: “If it has been believed hitherto that the human shadow was the source of all evil, it can now be ascertained on closer investigation that the unconscious man, that is, his shadow, does not consist only of morally reprehensible tendencies, but also displays a number of good qualities, such as normal instincts, appropriate reactions, realistic insights, creative impulses, etc.’”

I’d been introduced to the shadow in the late 1970s, when I was a kid and read A Wizard of Earthsea, the science fiction novel by Ursula K. Le Guin. A Wizard of Earthsea is the story of Ged, a wizard in the realm of Earthsea. Ged is focused on learning “to gain power” with his magic, so much so that he casts a spell to summon dead, and it unleashes a shadow. As he first reads about the spell Ged “saw that something was crouching beside the closed door, a shapeless blot of shadow darker than the darkness.” The master wizard Ogion enters, dispelling what he later calls only “the shadow of a shadow.” Ogion then questions young Ged: “Have you never thought how danger must surround power as shadow does light?”

Ged travels to an island called Roke—on a ship named Shadow—but his refusal to integrate his own shadow is building to a terrible eruption. As Jung observed, “The less [the shadow] is embodied in the individual’s conscious life, the blacker and denser it is.” Despite being warned by a new instructor, The Master Hand, that “[T]he world is in balance,” Ged argues that “surely a wizard… was powerful enough to do what he pleased, and balance the world as seemed best to him, and drive back darkness with his own light.” Ged uses a spell to summon a spirit from the dead, but the spell unleashes something else, described by Le Guin as a shadow “the size of a young child [with] no head or face.” The shadow attacks Ged, who barely survives. Ged spends the rest of the A Wizard of Earthsea learning to integrate the shadow, eventually recognizing it as part of himself. Towards the end of the story, while on a boat, Ged sees his shadow in a corner of the deck but is no longer afraid. He calmly accepts that he is encountering a part of himself

At the time I read the Earthsea trilogy, I was too young to fully understand my shadow, instead spending a lot of my time, as all young people do, projecting it onto others. It was they, not I, who were insecure, sexually promiscuous, drunk, resentful, angry. But adulthood and its sufferings had grounded me. I know my shadow. And now, with my profession collapsing, my mother cared for in assisted living, and my breaststroke strong enough to go into the deep, I’m returning to the ocean—that dark, symbolic subconscious that is also the place where all evolutionary life began. I have no idea when or if I will return.

I come here to remember who I am.