The Beatles as tools of the CIA and Mossad. 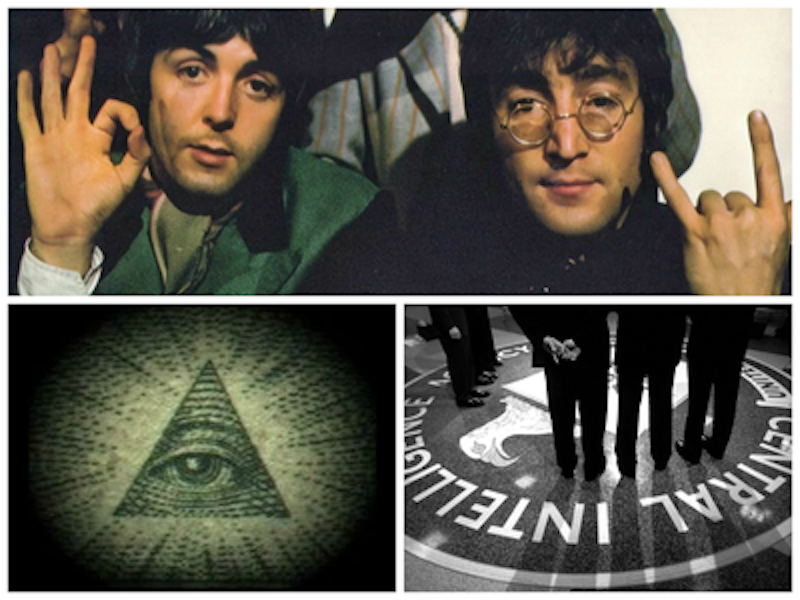 Professor Crispin Sartwell’s article on the Beatles this week is fine, but it neglects an element in that overrated pop group’s rise. That element is the influence of the CIA and Mossad.

In the early 1960s those agencies were eager to support certain elements in the nascent counter-culture. The goal was to subvert traditional values throughout the world, thus making it that much easier for Wall Street’s market-nihilism to dominate the ideological space, in the West in particular. In short, the CIA and their Tel Aviv adjuncts (or maybe it’s the other way around) exploited John, Paul, Ringo, and George, not to mention Pete Best and Stu Sutcliffe, as tools of American imperialism—likable, and sneakily non-American, mop-topped vectors of the American popular cultural virus. Where the CIA/Mossad task force could put a thumb on the scale to aid the “Fab Four,” it did. In return, the musicians were in hock to the spies.

All of the musicians? A good question. It remains unclear to what extent the musicians were willing pawns of the Zionist spooks, though it’s clear that not one of them was unaware of the political uses to which his creativity, if that’s what it was, was being put.

The most thorough writing on this topic was done by the late Dr. Jock Stevens, the Ohio orthopedist who disseminated his crucial Xeroxed tract, “Skull & Bones, the Zionist Centrum, and the CIA in the Rise of ‘British’ Pop Music in the Aftermath of the Treaty of Rome” at John Birch Society meetings in the greater Cincinnati area between 1979 and 1982.

Dr. Stevens traced the ties of Beatles manager Brian Epstein, a Lithuanian Jew by blood, to left-wing/capitalist crypto-Zionist elements in the “de-Nazified” financial structures that controlled Hamburg’s postwar commercial real estate, particularly the Cavern Club where the Beatles cut their teeth. The CIA/Mossad team controlled that establishment, making sure that the Beatles enjoyed pride of place there, to the detriment of the careers of other local “rhythm” acts. As always when powerful gentlemen named “Shlomo” and “Hyman” are involved, it is the Black who suffers. Stevens described how superior “race music” acts comprised of handsome American Black former U.S. servicemen were forced out of the Cavern Club to accommodate the white Englishmen.

Dr. Stevens also traced Hamburg real estate money to the The New York Times and other Zionist propaganda organs as, in the Kennedy era, they smeared Taft Republicanism. He is also skillful in tying the father of Stu Sutcliffe (born Shmuel Schmutkleft) to the King David Hotel bombing. Less convincing was Stevens’ placing Upper West Side resident John Lennon at the center of his neighborhood’s neo-con/Trotskyite/Likudnik/Zionist Combine, on the basis merely of Lennon’s partiality to the summer borscht at Barney Greengrass. But Dr. Stevens was an amateur, and did the best he could.

I don’t mean to criticize Sartwell’s fine column for what it did not include. I mean only to deepen the discussion of a fascinating corner of our cultural history—a history that is also very much a political history.

Spring having come, I’m wondering whether during summer I should, like the desert prophets, go barefoot, at least when walking on other than paved surfaces.

My sandals are indeed condign manly footwear, and pair well with khaki shorts that brush the upper middle section of my thigh. But even without socks, they separate my feet from the glory of God’s green earth. I treasure a picture of the aged Tolstoy, barefoot as he drove a plow with his peasants—and I wonder whether I won’t profit spiritually from going, as the Most Holy and Blessed Patriarch Kirill would say, bossikom. (That is, barefoot.)

I am, however, conscious that of the eroticization of the male foot that has become widespread in our decadent consumer society over the last decade. I wouldn’t like to contribute to that eroticization, as Mother insists I would. We inhabitants of the post-Christian West already live amidst a very holocaust of soul-killing sensuality. Why should I make it worse?

Brother Aiden, on the other hand, insists on an alternate tradition of the bare male foot. This, he says, is a tradition of a Platonic connoisseurship of the nude male foot. An aficionado of ancient Athens, Aiden claims that numerous fourth-century Greek vases depict foot-connoisseurship among men; and he insists that this deeply rational tradition is still relevant today. He even maintains that there exist, in certain Dutch and German cities, groups of men who convene periodically to appreciate the arch, the sole, and the digit in their harmony, thus keeping alive the spirit of the Greek symposium.

I’d feel comfortable associating myself with this latter tradition, if it’s really as chaste as Brother Aiden insists it is (Aiden is a bit naïve). Yet there remains Mother’s stubborn resistance, not to mention the possibility of hookworm.

I will address these questions at some other time. As I write, it is Holy Thursday, and all Russian Orthodox Christianity prepares for Easter, our glorious PASCHA!