Reveling in the folk wisdom of Russia. 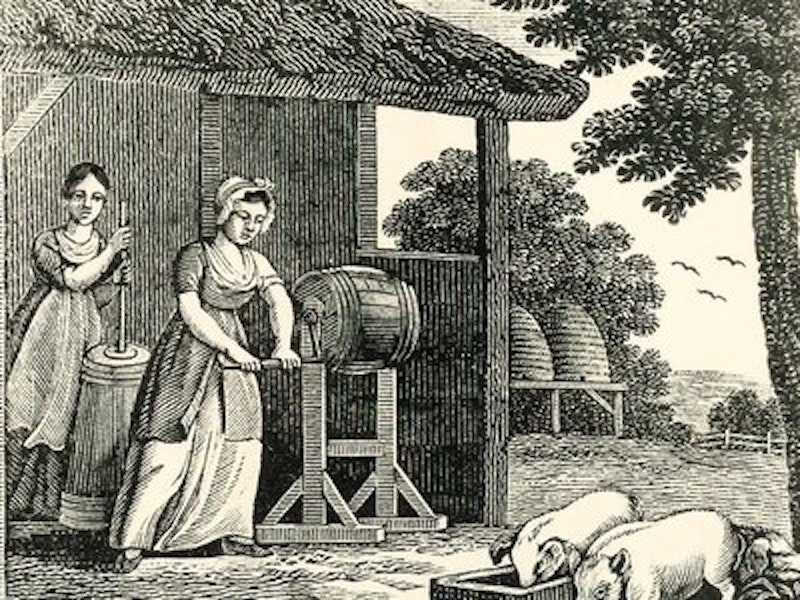 The question of how to discipline the weaker sex is one that’s always fascinated me, but all the more so since I left Methodism to convert to the Russian Orthodox Church (may the Patriarch Kirill be venerated!). That’s because Orthodox Christianity, rooted in the spiritually robust soil of Mr. Putin’s Russia, still takes female virtue seriously, as milquetoast American Protestantism doesn’t.

I’ve profited a lot from conversations about disciplining women with Father Nicodemus, the ruddy, cackling young immigrant Russian priest who forms the bedrock on which our little Orthodox mission church here in rural Indiana is built.

What rich additions to my religious practice these meetings are! Our last took place at my hearth, where Father and I occupied comfortable armchairs, our sandaled feet toasting by the first fire of autumn. Mother brought us tea and her home-baked country bread, slathered with the rich butter that, despite her goiter, she still churns each week as one of her wifely duties. So that Father and I didn’t need to interrupt our manly colloquy, Mother also took it on herself to tend the fire, hauling in logs by the armful from the outbuilding.

How I revel in the pungent folk wisdom of Russia! At one point Father Nicodemus cited a Volga-area saying to the following effect: “To keep a woman’s face clean, it is necessary to expose it to the sole of one’s boot.”

I assumed he was speaking metaphorically, and I was ready to contemplate the paradox of this splendid peasant saying. But Father assured me that, no, the expression was to be taken literally. Regaling himself with bread and butter, he explained to me the Volga-area peasant practice of morally educating one’s wife with the help of one’s footwear.

“You see, John,” he explained, placing his friendly hand, with its diamond pinkie ring, on my thigh, “Russian villagers invested what wealth they had in their farm equipment. So beating disobedient wives and daughters with, say, hoes, rakes, shovels, threshing tools, scythe-handles, or other farm implements would have struck them as insane. A good shovel for digging up roots and grubs during a winter famine could mean the difference between starvation and survival.”

“Whereas,” I offered, “if a Russian paterfamilias corrected his wife with a blow to the head from a bast foot cover, there was no meaningful loss to his fixed capital.”

He went on to describe how, by tradition, the poorer Russian peasants had more disobedient wives. This was not because of any moral failing among them—these lower-order Russian peasants were fine Orthodox men. It was due, rather, to their footwear. Poorer peasants tended to wear soft felt booties, giving them a disadvantage in perfecting their wives as compared to their richer peers, who could afford to wear heavy leather boots (sapogy) with hard soles.

When one converts to Russian Orthodoxy, one inherits not only a theology and a rite, but a culture of infinite depth and richness.

The season of brewing is upon us!

Brother Aiden and I are collaborating again this year on our organic turnip ale, a true gift from the Logos—for the truly pious man knows that it is appropriate to enjoy the good things that the Logos has placed on this earth for our succor. I’ll be satisfied if this year’s ale is half as tasty as last year’s. And I pray for the humility to yield to good Aiden if, as he has in the past, he quibbles about the consistency of the wort. We must be humble!

I lay down my pen and, buckling my sandals, hasten to our makeshift brewery!