How I announced myself to the world. 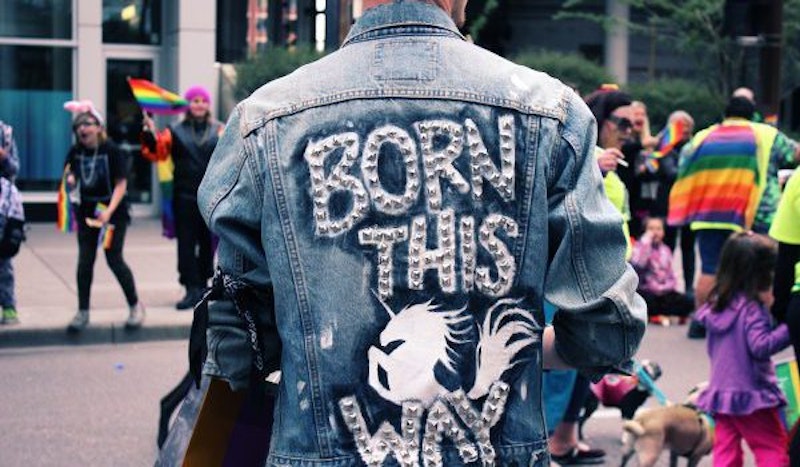 New York Comic-Con was last weekend, so of course I threw on my Adventure Time hat and ran uptown to the Javits Center, where I bought entirely too many Robin comic books and a snazzy Starfleet magnetic pin. I’ve been attending Comic-Con in one capacity or another for years now, and always manage to have a lovely time despite the crowds; there’s a bevy of deals, plenty of wonderful industry people to meet and interview, and Lord have mercy, the costumes are stupendous. But this year’s convention was different from others. It was the first time I’d attended NYCC as an out trans girl.

Strictly speaking, I was mostly out last year; I attended in a dress one day, wearing a “she/her pronouns” sticker from GeeksOut, and made no bones about being queer if asked. But I didn’t come out to my friends and family until almost midnight on National Coming Out Day, which happened to be the last day of NYCC 2015.

Coming Out Day is a charged topic in LGBTQIA circles; whereas some see it as a joyous opportunity for closeted people to announce their truth to the world and embrace their communities and identities publicly, others view the occasion as a once-positive day co-opted by corporate Pride movements into a coercive event that bullies queer youth and others in the spectrum, enforcing “coming out” as the only legitimate option. I wasn’t aware of any of these arguments last year; I just saw a lot of my new friends posting about this hashtag, and felt a little pressure in the back of my head. Should I do it? Should I take the plunge?

So at 11:50 p.m., in the nick of time, I posted a selfie—one of the first pictures I’d ever taken of myself that I was proud of, wearing an understated blue dress and button-up shirt on the train to Comic-Con (evidenced by my Batgirl button) the previous day. Immediately afterwards, I went to bed. I had no desire to see the comments on my picture until the next morning. Sleep came and washed away my dread.

The fear returned in the morning, but only briefly. I’ve said before that I’ve been supremely lucky in my transition, and coming out for me was no different; I experienced near-universal acceptance among my friend group, and relatives who were confused made sounds indicating they would probably come around at some point (if they bothered commenting at all; no noise is good noise). Soon after, I began this column. (For Coming Out Day this year, I simply let my friends know that if they wanted someone nonjudgmental to quietly come out or vent to, I was available. I want to pay my good fortune forward.)

This year’s convention, then, would be special for me. For the first time, I was attending as a girl confident in her gender, unafraid of the reactions I might provoke or professional opportunities I might lose as a result of looking and sounding noticeably trans. In fact, it was quite the opposite; I came prepared not only to conduct several interviews and cover a panel for Barnes & Noble, but to speak on a panel on intersectional feminism moderated by my friend and colleague Sam Maggs. Over the past year, while I was trying to figure out who I was, that person had apparently arrived.

One of my interviews was with celebrated comics creator Carla Speed McNeil, who I’d met years before at my first NYCC; in 2015, I approached her booth once again and asked if she remembered the boy who had asked her to sign his copy of Transmetropolitan: Tales of Human Waste. Somehow, she did—and even more bizarrely, when I wandered by to awkwardly hang out again the next day, she remembered the pronouns from my sticker. That simple act was a major factor in my decision to bite the bullet and come out later that night on Facebook.

I told Carla how much her simple act of observation meant to me; we hugged. Then we talked for 45 minutes with her No Mercy co-creator Alex de Campi about emojis and writing authentic trans characters while being cisgender themselves. We took a ridiculous selfie. And as I left, Carla wished me well and called me “darlin’” once more as she returned to the business of hawking aboriginal science fiction books. If I didn’t dance away, it’s because Artist Alley is packed to the gills on Sunday.

NYCC isn’t FlameCon—Brooklyn’s newest convention, dedicated to LGBTQIA comics fans who want a space for themselves. NYCC will never cater to my precise needs, nor should it. But in my mind, much like National Coming Out Day, NYCC will always be an institution that despite flaws, heralded my first hesitant steps into a new life and the triumph of my own personal truth. Without them, I wouldn’t be the girl I am today.